Before OJ there was the OG. The Original Gangster. In fact he was front and centre of an action-packed film with almost that very name (titled the slightly more streetwise Original Gangstas). Many sports stars have transitioned from the stadium to the screen, remaining in front of the lens with rehearsed acts rather than the spontaneous, unpremeditated performances that made their name first.

Before his fall from grace in 1994, O.J Simpson had become as much an uncontainable personality away from the gridiron as he was on it. He smashed NFL records like he did defences, including becoming the first NFL player to rush for more than 2,000 yards in a season. As a balancing act, Simpson cashed in on his celebrity, appearing in both television series and film productions.

But this isn’t about The Juice. This is about the man he could have been. The man O.J Simpson would clean the boots of, and be grateful for it. For before Simpson there was an even greater running back, and one that tired of bulldozing through defences and started bulldozing through barriers.

Even today, if God descended from the heavens and created an American football player in the ideal image that could aesthetically evolve into a cultural icon, it would struggle to compete with Jim Brown.

“Faster than a speeding bullet. More powerful than a locomotive. Able to leap buildings in a single bound,” his NFL tribute borrowed from the description of Planet Krypton’s favourite son, “The pro game in the pop age had a number of superstars, but only one Superman. And he was Jim Brown.” 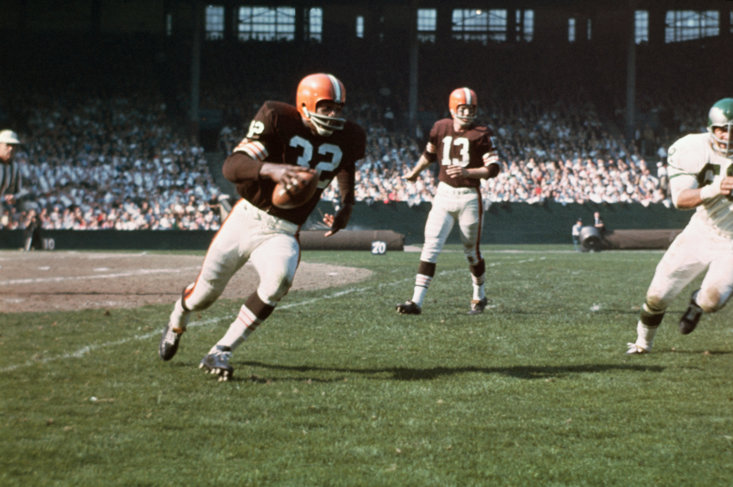 Brown was arguably bigger than the sport itself. And he walked away from it when he was just 29 years old. Now 85, he existed in the pro spotlight for just a fraction of a lifetime, just nine short years, before trailblazing from the sports scene into cinema. An American All-Star who would also best the majority in basketball, track, and lacrosse, with the sixth pick in the 1957 NFL Draft the Cleveland Browns became the Cleveland Jim Browns. He would go on to lead the league in rushing for eight seasons, the most rushing titles in the game’s history, twice as many as any other nearest contender. On 20 October 1963 Jim Brown set the then NFL single-season rushing record with 1,863 yards and 12 touchdowns. This short supernova single-handedly ignited the National Football League.

“He always shocked everybody, I think, how fast he was, and then you tack onto the 225lbs. A mean, tough runner.”

Brown got to the top alone. And he shocked the world by bowing out just there, though not before breaking through the ceiling that was installed to suppress his 6ft 2inch, 225lb frame. He was the one that reached the apex of his sport and left it, and himself, better off. 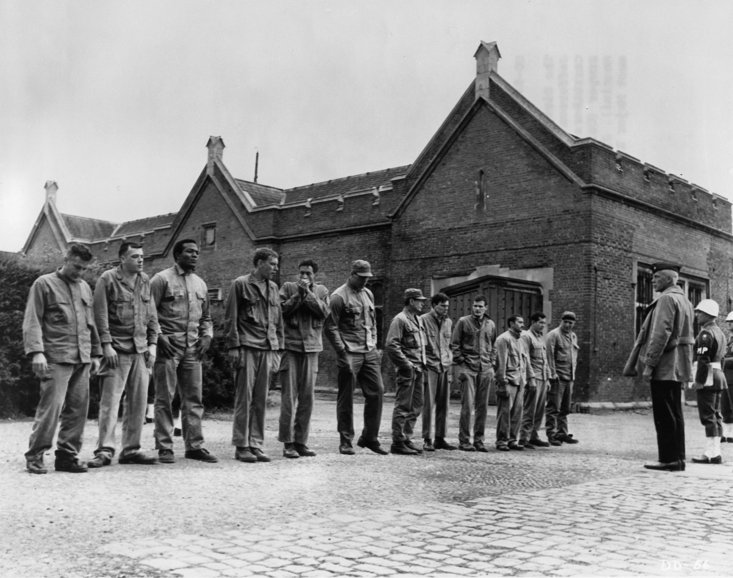 BROWN JOINS AN ALL-STAR CAST IN 'THE DIRTY DOZEN'

When the 1965 NFL season ended, Brown journeyed to London to film a new picture. He had dabbled in acting before, including in the TV series I Spy. But this was bigger. Directed by the acclaimed Robert Aldrich and featuring an all-star cast including Lee Marvin, Ernest Borgnine and Charles Bronson, Brown would be one of The Dirty Dozen. Delays in filming threatened to encroach on the NFL preparation, as he prepared to enter the final year of a two-season $60,000 per year deal with the Browns. If he wanted to play the next season and collect his money, The Dirty Dozen would have to become ‘The Dirty Eleven’.

Browns owner Art Modell issued a statement with an ultimatum and began fining Brown $100 for every day that he didn’t show up for training. The crossroads was clear. Brown dismissed the threat, continued filming in the British capital and hung up his pads and helmet. The Dirty Dozen became a commercial success and helped Brown land the lead in The Split, a film that earned him a $125,000 paycheck, more than twice what he was making each season at the Browns. Chapter One had finished. Chapter Two had begun.

Brown, atypically, did not go gently into that good night. He closed out the 60s with a statement. In the aforementioned western 100 Rifles, the Brown-led picture was designed to stir, depicting the protagonist steamily cavorting with white woman Raquel Welch in one of the first American interracial love scenes to be shown on screen. As a result, he was becoming a leading visible figure in the Black Action Cinema of the 1970s, appeared in some of the most iconic television series of the 1980s, later battling Arnold Schwarzenegger in The Running Man, and acting for both Tim Burton (Mars Attacks) and Oliver Stone (Any Given Sunday). 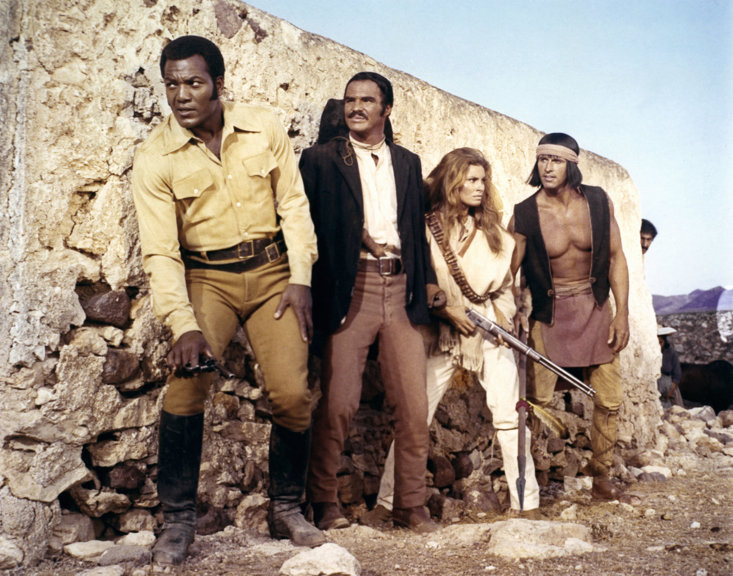 In those later appearances Brown was continuing to give his all at a time when the talk of athletes-come-actor turned immediately to the reputation O.J Simpson had now engendered for himself. When Brown should have still been getting the plaudits for a long-standing, outstanding duel domination of both football and cinema, the conversation was no longer regarding the mix of disciplines, only about the scandals.

Simpson might have the fame - or rather infamy - but Brown was brilliant, black, and unblemished, with his story even being given the Spike Lee treatment in the 2002 documentary Jim Brown: All-American that proclaimed him as a true Stars and Stripes icon. He is what the American people hoped O.J to be, and Brown’s story should be championed as much as Simpson’s should be seen as a vicissitude of unbelievably epic proportions.

Footballer Brown was first and foremost.

x
Suggested Searches:
The Sportsman
Manchester United
Liverpool
Manchester City
Premier League
More
boxing
On This Day: Sugar Ray Leonard Edges Past Marvin Hagler In Titanic...
"How do you like it, how do you like it?!"   The commentator's words rang out [ ... ]
football
''I Believe In Fairies'' - The Life And Times Of The Extraordinary...
Brian Clough wasn’t just one of the most quotable managers in English football’s long history, [ ... ]
football
Rangnick Right About Fourth Being United's Ceiling, But He Shouldn't...
"We want to finish fourth in the league, this is the highest possible achievement we can get.” [ ... ]
boxing
Angelo Dundee: Three Masterpieces From Boxing’s Greatest Trainer
Perhaps the greatest cornerman of all-time, Angelo Dundee guided the careers of sixteen world champions [ ... ]
boxing
The Day Ali Talked A Suicidal Man Down Off The Ledge Of A Beverly...
Wilshire Boulevard in Los Angeles cuts right through the heart of Beverly Hills. One particularly famous [ ... ]
boxing
From Broadway To Hostage Negotiation: Ali's Best Moments Outside...
Muhammad Ali transcended the world of not just boxing, but sport as a whole, like no other athlete who [ ... ]
football
Zaha's Double, 1989 And 'Poogate': Inside The Brighton v Crystal...
This article first appeared in The Sportsman on 27th September, 2021 Crystal Palace against Brighton [ ... ]
boxing
George Foreman’s Faith: How The 45-Year-Old Heavyweight Stunned...
George Foreman swept through the heavyweight division like a hurricane, obliterating nearly all who [ ... ]
boxing
Last Round, Folks: When Boxing’s Invisible Champion Was Blitzed...
History has not been kind to Floyd Patterson. Countless world champions have drifted through the annals [ ... ]
boxing
The Life And Times Of Heavyweight Legend Jack Johnson
What do Alan Turing, The Doors frontman Jim Morrison and the comedian Lenny Bruce have in common? These [ ... ]
boxing
Pacquiao: From Poverty-Stricken School Drop-Out To Eight-Weight...
"I knew without a doubt I would become a fighter - I knew that the underdog can, and often does, [ ... ]
sports
Hulk Hogan, Mr. T And Madison Square Garden's Five Greatest...
It’s named after the fourth President of the USA. It’s where George Harrison had his concert [ ... ]
snooker
VR Mishaps, Pig Farms And American Hustles: When Ronnie O’Sullivan...
As it's snooker legend Ronnie O'Sullivan's 46th birthday, we thought we'd take [ ... ]
sports
Meet The Man Who Climbed Everest, Partied For A Week, Then Climbed...
This article first in The Sportsman on 08/12/19 There’s nothing normal about Nirmal Purja. After [ ... ]
motorsport
Frank Williams - A Formula One Pioneer Whose Team Went To The...
For much of the 1980s and 90s, Williams Racing was the biggest name in Formula One and Frank Williams [ ... ]
football
How Cantona Made Manchester United The Dominant Force Of The...
It started with Leeds United making an enquiry about signing Denis Irwin and finished with Manchester [ ... ]
football
Almost 30 Years Since THAT Goal, Davide Gualtieri Is Still San...
8.3 seconds, 28 years ago. That’s all it took for part-time footballer, part-time computer [ ... ]
boxing
River Wilson Bent Talks Coventry City, Newborn Baby And British...
“Imagine if Coventry City made it to the Premier League and I brought the British title home for [ ... ]
football
Neil Warnock - The Record Breaking Football Lover That Just...
When the whistle blows at Kenilworth Road for Luton Town's home match against Middlesbrough on Tuesday [ ... ]
football
Leicester's City Progress Is Proof That Vichai's Vision Has...
On this day three years ago Leicester City lost their influential owner, Vichai Srivaddhanaprabha in [ ... ]
rugby-league
The Birth Of The Grand Final: Rugby League's Biggest Of Big...
“I’ve said it for years… the last game of the season should be the most important,” [ ... ]
football
Celebrating Arsenal's Invincibles With The Stats That Tell The...
There’s Sergio Agüero winning it in Fergie time. Liverpool finally ending 30 years of hurt [ ... ]
football
From Balotelli To Bullard, The Premier League's Greatest Ever...
It's been a full decade since Mario Balotelli lifted his shirt in Manchester City's 6-1 [ ... ]
motorsport
On This Day: Rookie Lewis Hamilton Loses F1 Title In Controversial...
On this day in 2007, we witnessed perhaps the greatest end to a Formula One season we have ever seen. [ ... ]
motorsport
How Lauda's 140mph Crash Marked The End Of The Age Of Innocence...
There are few worse moments to lose control than when driving at 140 miles per hour. The events on just [ ... ]
football
FA Cup Round-Up: Brilliant Buxton Make First Round As Dorking...
It was a night when Dorking Wanderers saw their dreams dashed by Hayes and Yeading, Stratford made some [ ... ]
football
Sheriff Tiraspol - The Champions League Club With Two Faces
On the surface, it has been the underdog story of the Champions League so far. Never before has a club [ ... ]
boxing
From Taming Tyson To Bashing Buster, Evander Holyfield’s Best...
Today marks the 59th birthday of one of the best boxers to lace up a pair of gloves in the modern [ ... ]
football
Fernando Torres - Atletico's Local Hero, Liverpool's Tainted...
‘This means more’ is Liverpool’s oft-derided motto, but when they face Atletico Madrid [ ... ]
football
On This Day In 1987: The Rangers v Celtic Shame Game
Whatever the circumstances when Rangers face their Glasgow neighbours Celtic the [ ... ]