There’s nothing normal about Nirmal Purja.

After realising that the record time for conquering the 14 highest mountain peaks in the world was seven years, 11 months and two weeks, the Nepalese former Special Forces officer decided to break it.

Actually the ex-Gurkha opted to smash it.

Already inked in the Guinness World Records for his mountaineering exploits, Purja reached the summit of all ‘8000ers’ - the 14 mountains in the world that rise up over 8000ft - in just 189 days.

Yes, 189 days. His feat broke the previous standard by a stonking six years.

“Breaking this record is better than anything anyone had imagined before,” Purja tells The Sportsman. “When I first started climbing the 8000ers I never thought I would do this.”

The 14 peaks are located from the north-east of Pakistan (the mountain known as Nanga Parbat) to the country’s border with China (Chhogori - also referred to as K2, where one in four people attempting to reach the summit die). Mind-bogglingly, the 36-year-old did the first 11 in just 94 days.

Purja explains where the inspiration for the challenge comes from, dating back to 2017:

“I was one of the lead instructors for the Gurkhas Climbing Everest with the Gurkas to celebrate the 200 years of being in service to the British Crown and the country.” In total Purja guided 13 British Gurkhas to the summit as part of the ‘G200E’ expedition.

“Upon completion of that, I obviously celebrated the success of the Gurkhas. But that’s also when I realised I had so much to give in this field,” Nirmal continues.

“For me, I never do things for trophies and stuff. However, I set myself a timeline of four-and-a-half months for completion.” 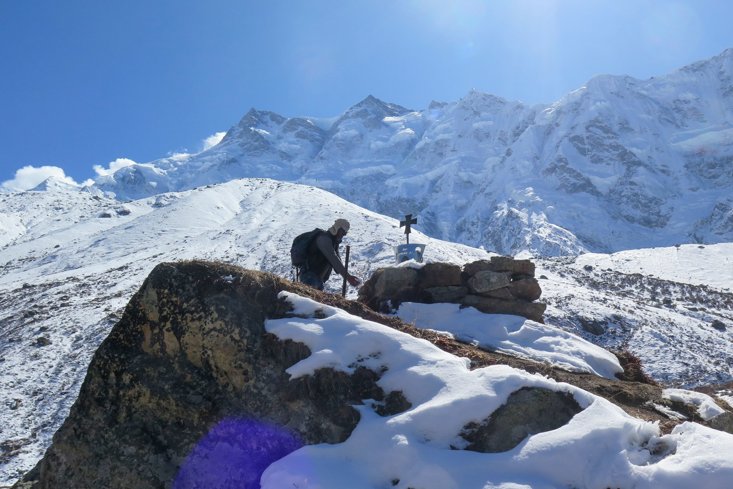 The real belief in himself came after a pioneering frenzy that would leave other mere mountaineering mortals both literally and figuratively shivering.

Then he went on and climbed the world’s fourth and fifth highest mountains, Lhotse and Makalu, all in the space of five days, and, in Purja’s own words: “with two days for a little celebration in between, otherwise it could have been three”.

Nobody had previously achieved that in a single season.

Purja was born in Nepal in the Myagdi region, though he grew up in the warmest part of the country, Chitwan. From a young age he just wanted to be a gurkha, following the same route as his brothers. He joined in 2003, and served with them for six years.

“But after that I wanted to learn more and push myself more so I decided to join the SPS (Special Boat Service) in 2009, and I went on to serve with them for 10 years. Then at the 15-year point of my career I decided to go exploring.”

For the mountaineering enthusiast/tourist, the cost of climbing Mount Everest can range up to an eye-watering £90,000, including a single £9,000 royalty fee for the mountain. Across the season, approximately 1000 people attempt to climb Everest, with approximately a 50% completion rate. Purja, however, had to add all the contingency factors because there was no funding.

“No one knew who I was, I wasn’t an accomplished explorer and didn’t have the exposure. it was tough, man,” he adds.

“The challenge extended to all different levels. For me, it was massively mentally challenging. I had resigned from the special forces, sold my house. I left for Nepal from England when I had only 10% of the funding, but I had belief in this so I was doing the fundraising at the same time. 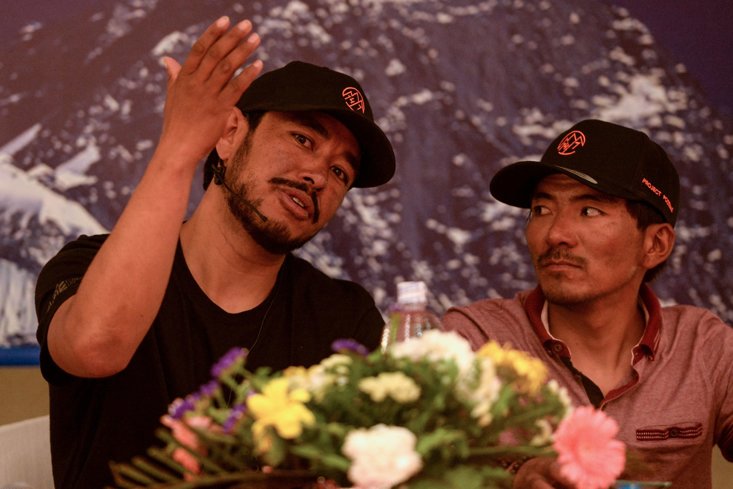 When asked if there were any moments in which he could have just turned around, Purja is adamant: “There were no regrets. The whole team just had positive energy.

“It’s when you haven’t slept for days and days and you’re still climbing in extreme conditions. The amount of energy and effort we had to put in was immense. We did this because we believed in it. We as a team knew that it wasn’t only for us. It was a great team. We’re like a family now.

“I knew 100% why I was doing this, and that I was going to do it. I never reached one particular moment of ‘Wow, I’m so glad I’m doing this’. I kind of had that feeling when I summited my last mountain, but before that when you’ve climbed through such extreme conditions you just see your team and the camaraderie.”

Purja faced a host of challenges - as one would expect in achieving something that nobody has come even remotely close to accomplishing before - including the so-called ‘death zone’ on Everest.

“We call it the death zone because birds are literally dying. Everybody has to trigger their survival instinct. Whoever is next to you, you try to grab them and try to survive. Everybody’s in survival mode. It’s that kind of environment,” he explains. 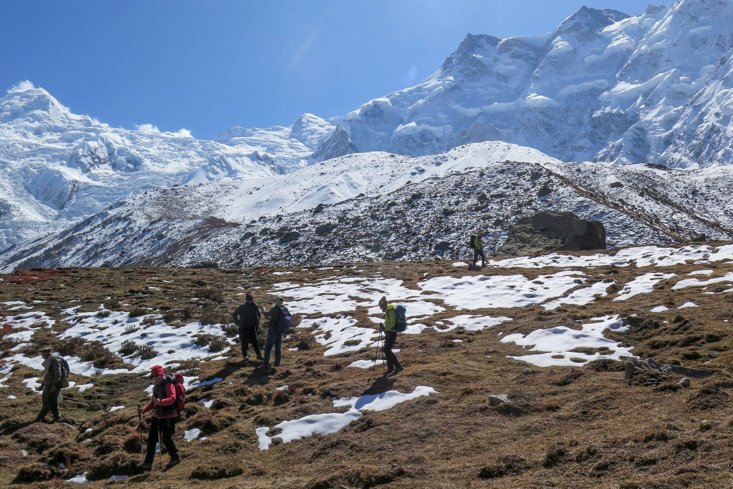 One of the biggest obstacles was getting ‘past politics’. In September, his challenge was held up while he waited for permission to climb the final mountain, Shishapangma, in the Tibetan autonomous region of China. One denial would have put the whole challenge in jeopardy.

Then there was one point on the Everest descent, from about 8450m, Purja even rescued a female climber who had run out of oxygen and had been left behind to die.

“The most suicidal thing I did was climb across all four days in extreme weather, from base camp to summit,” says Purja. “And when on the way down, giving that oxygen to that female climber and then doing the rescue at such high altitude, it’s next level.

“It wasn’t about the ego or proving anything to anyone. I have my own motive and I know how to adapt - if you don’t learn from the lessons you have, you’re no good to anyone, you have to progress.

“When you get to an 8000er-summit it is really an amazing feeling. You’re at one of the world’s highest points and the weather’s good and you’re standing above the clouds and you’re looking out as far as the eye can see, and then there are mountains below you. It’s so great.”

Purja is an extreme sports enthusiast who also loves skydiving, a free-falling avocation quite appropriate for a man who enjoys scaling the heights.

He’ll be releasing a book on his adventures, and is currently meeting with lots of publishers. Purja hopes a feature film will follow soon after that.

“The message is really clear from this project. It’s not about anyone, no one knows you better than yourself,” he says. “If you want to do something you have to believe in it, and put your heart and soul and mind into it, and put in 100%.

“You need the will to make it happen, the determination and drive and a really positive mindset, and only with that can you overcome those obstacles.”

x
Suggested Searches:
Manchester United
Liverpool
Manchester City
Marcus Rashford
Premier League
More
boxing
The Day Ali Talked A Suicidal Man Down Off The Ledge Of A Beverly...
Wilshire Boulevard in Los Angeles cuts right through the heart of Beverly Hills. One particularly famous [ ... ]
boxing
From Broadway To Hostage Negotiation: Ali's Best Moments Outside...
Muhammad Ali transcended the world of not just boxing, but sport as a whole, like no other athlete who [ ... ]
football
Zaha's Double, 1989 And 'Poogate': Inside The Brighton v Crystal...
This article first appeared in The Sportsman on 27th September, 2021 Crystal Palace against Brighton [ ... ]
boxing
Remembering The Fight That Sparked Sport's Greatest Rivalry:...
This article first appeared in The Sportsman on 12/01/20 “I hated Ali. God might not like me talking [ ... ]
boxing
George Foreman’s Faith: How The 45-Year-Old Heavyweight Stunned...
George Foreman swept through the heavyweight division like a hurricane, obliterating nearly all who [ ... ]
boxing
Last Round, Folks: When Boxing’s Invisible Champion Was Blitzed...
History has not been kind to Floyd Patterson. Countless world champions have drifted through the annals [ ... ]
boxing
The Life And Times Of Heavyweight Legend Jack Johnson
What do Alan Turing, The Doors frontman Jim Morrison and the comedian Lenny Bruce have in common? These [ ... ]
boxing
Pacquiao: From Poverty-Stricken School Drop-Out To Eight-Weight...
"I knew without a doubt I would become a fighter - I knew that the underdog can, and often does, [ ... ]
sports
Hulk Hogan, Mr. T And Madison Square Garden's Five Greatest...
It’s named after the fourth President of the USA. It’s where George Harrison had his concert [ ... ]
snooker
VR Mishaps, Pig Farms And American Hustles: When Ronnie O’Sullivan...
As it's snooker legend Ronnie O'Sullivan's 46th birthday, we thought we'd take [ ... ]
motorsport
Frank Williams - A Formula One Pioneer Whose Team Went To The...
For much of the 1980s and 90s, Williams Racing was the biggest name in Formula One and Frank Williams [ ... ]
football
How Cantona Made Manchester United The Dominant Force Of The...
It started with Leeds United making an enquiry about signing Denis Irwin and finished with Manchester [ ... ]
football
Almost 30 Years Since THAT Goal, Davide Gualtieri Is Still San...
8.3 seconds, 28 years ago. That’s all it took for part-time footballer, part-time computer [ ... ]
boxing
River Wilson Bent Talks Coventry City, Newborn Baby And British...
“Imagine if Coventry City made it to the Premier League and I brought the British title home for [ ... ]
football
Neil Warnock - The Record Breaking Football Lover That Just...
When the whistle blows at Kenilworth Road for Luton Town's home match against Middlesbrough on Tuesday [ ... ]
football
Leicester's City Progress Is Proof That Vichai's Vision Has...
On this day three years ago Leicester City lost their influential owner, Vichai Srivaddhanaprabha in [ ... ]
rugby-league
The Birth Of The Grand Final: Rugby League's Biggest Of Big...
“I’ve said it for years… the last game of the season should be the most important,” [ ... ]
football
Celebrating Arsenal's Invincibles With The Stats That Tell The...
There’s Sergio Agüero winning it in Fergie time. Liverpool finally ending 30 years of hurt [ ... ]
football
From Balotelli To Bullard, The Premier League's Greatest Ever...
It's been a full decade since Mario Balotelli lifted his shirt in Manchester City's 6-1 [ ... ]
motorsport
On This Day: Rookie Lewis Hamilton Loses F1 Title In Controversial...
On this day in 2007, we witnessed perhaps the greatest end to a Formula One season we have ever seen. [ ... ]
motorsport
How Lauda's 140mph Crash Marked The End Of The Age Of Innocence...
There are few worse moments to lose control than when driving at 140 miles per hour. The events on just [ ... ]
football
FA Cup Round-Up: Brilliant Buxton Make First Round As Dorking...
It was a night when Dorking Wanderers saw their dreams dashed by Hayes and Yeading, Stratford made some [ ... ]
us-sports
Celebrating Jim Brown - The NFL Movie Giant Who OJ Robbed Of...
Before OJ there was the OG. The Original Gangster. In fact he was front and centre of an action-packed [ ... ]
football
Sheriff Tiraspol - The Champions League Club With Two Faces
On the surface, it has been the underdog story of the Champions League so far. Never before has a club [ ... ]
boxing
From Taming Tyson To Bashing Buster, Evander Holyfield’s Best...
Today marks the 59th birthday of one of the best boxers to lace up a pair of gloves in the modern [ ... ]
football
Fernando Torres - Atletico's Local Hero, Liverpool's Tainted...
‘This means more’ is Liverpool’s oft-derided motto, but when they face Atletico Madrid [ ... ]
football
On This Day In 1987: The Rangers v Celtic Shame Game
Whatever the circumstances when Rangers face their Glasgow neighbours Celtic the [ ... ]
athletics
On This Day In 1968: The Greatest Sporting Protest Of All Time
Some sporting images will stay with us forever. Muhammad Ali standing over Sonny Liston, Michael Jordan’s [ ... ]
football
Dorking Wanderers Aiming To Complete The FA Cup's Ultimate Underdog...
Something is stirring in the sleepy, stockbroker-belt Surrey market town of Dorking. And if the Wanderers [ ... ]
boxing
Outside the Ropes: Jennings Gym - Training, Tunes And Gardening...
Jennings Gym is not your average boxing gym. Tucked away on the ground floor of a former cotton spinning [ ... ]