In the summer of 2003, myself and my best friend entertained ourselves down at the local gravel-strewn tennis courts, as was now custom when term had ended; school’s out, let’s play tennis.

Similar to those who claim to be representing a particular footballer when they take to the pitch, we each designated ourselves tennis players, of course, the best and most famous at the time.

Our seemingly endless matches would have one constant; I was Andy Roddick and my mate was Roger Federer.

Time showed that one of us had made the more sensible decision. However, the potential rivalry between the two professionals across the next decade -  at the time of that year’s Wimbledon Roddick and Federer were 20 and 21, respectively - was mouthwatering.

Roddick had his venomous, cobra-like serve, brash attitude and unmerciful power (in 2004 he clocked the then-serving record of 155mph); Federer the proponent of grace and precision, the artist.

That year Federer claimed the first of his record-breaking Wimbledon titles, the beginning of an unparalleled career that has constantly clamoured for him to be regarded as the greatest tennis player of all time.

For Roddick, however, it became a distinctly different story.

At the BBC Sports Personality of the Year Awards that year, Roddick, in a pre-recorded skit, asked the viewer who they thought was Numero Uno in the tennis rankings that year and broke down the contenders; was it Agassi? Juan Carlos Ferrero? Leyton Hewitt?

Of course, it was leading up to the declaration that it was in fact him. A brilliant 2003 had seen Roddick win in Montreal and Cincinnati on the ATP tour, beating David Nalbandian and Mardy Fish, respectively, as well as victory at the US Open over Ferrero.

Unfortunately, that Grand Slam would be his only one.

Less than two months into the New Year, the sensational Swiss Federer had paired an Australian Open to his Wimbledon victory and had supplanted Roddick to begin his unprecedented 237 consecutive days run at the top of the rankings.

Notably, 2003 was the last time for nine years that the Grand Slams would be shared by four individual players; the next year Federer won all but the French Open and, up until 2019, only six players have managed to break the monopoly of Federer, Rafael Nadal, and Novak Djokovic; six players on ten occasions.

Roddick became more known for being the jock, the entertainer, and of course, his outbursts. For every moment of refreshing joviality, like pausing a match against Federer to ask spectator Ben Stiller for his autograph, there was the passionate, often vitriolic rage at a decision; “Stay in school kids or you’ll end up being an umpire!” Roddick memorably declared at the Australian Open.

In 2002 there was even an appearance on Sabrina The Teenage Witch, and the following year hosting Saturday Night Live. It was becoming clear that Roddick’s appeal was easily translatable off the court and his post-playing career in punditry is logical.

Roddick’s outspoken attitude could either be endearing - evoking memories of his supremely talented compatriot McEnroe - or frustrating; ‘an all bark and no bite’ attitude, if you will. There was his reaction after defeat to the Swiss in the 2009 Wimbledon Final, when Federer told him how he empathised with him, having lost to Rafael Nadal in that classic match the year previous; “Yeah but you’ve won five of them already!” That occasion marked the fourth and final time he faced and lost to Federer in a Grand Slam Finals, and the third time at Wimbledon.

This particular result can arguably be seen to either epitomise the lacklustre return of Roddick the player ‘the youngest American Number One in history’, or the fact that Roddick simply developed in an era in which the game was raised; the dominant triptych of Federer, Nadal, and - eventually - Djokovic unlikely to be unmatched in the game for a generation.

Roddick was primed to be the successor to Agassi and Sampras, the latter having retired in the same year that Roddick got his number one status. That didn’t happen. He does, however, remain the archetypal American men’s player of the immediate post-millennium. His charity work is exceptional and was rightly awarded the Arthur Ashe Humanitarian Award. The Andy Roddick Foundation continues to help at-risk youths.

As a character on-and-off the court, however, Roddick can claim bragging rights. 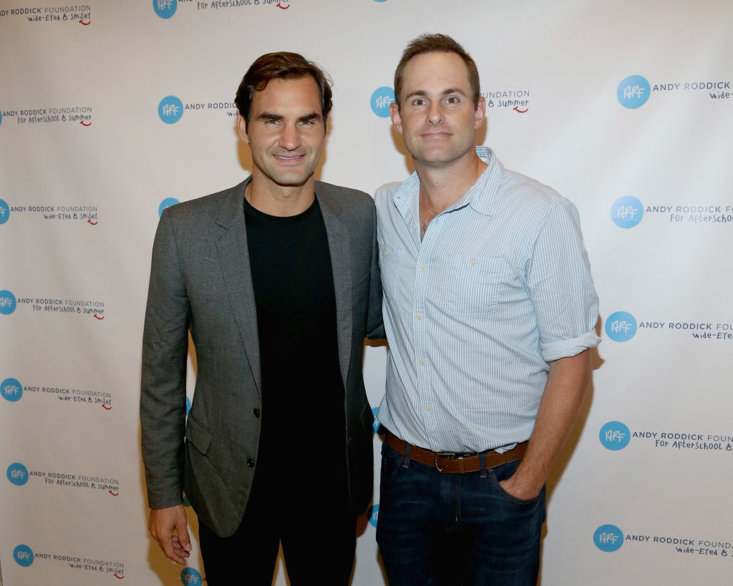 More
sports
Patrick Mahomes, A $503M NFL Deal And The Richest Contracts...
"Chiefs kingdom, you've been with me since the beginning - from rookie year. You helped us [ ... ]
football
Five Bona Fide English Stars Who Plied Their Trade Down The...
Wayne Rooney: record-goalscorer for club and country. At Manchester United, the Croxteth prodigy performed, [ ... ]
boxing
Hypnotists, USB Sticks And A Megaphone: When Boxers Bring Out...
The winners and losers in boxing aren’t always decided in the ring by whomever has the most superior [ ... ]
football
President Vs Player: One Year On From Rebel Rapinoe Being On...
"I'm not going to the f*cking White House. No, I'm not going to the White House. We're [ ... ]
tennis
The Day A Flawless Fred Perry Stormed Wimbledon To Win A £25...
“Packed Centre Court sees strenuous struggles for Championships!’ screamed the Pathé [ ... ]
boxing
Five Unmissable Big Screen Boxing Masterpieces That Aren’t Rocky...
Like almost no other sport, boxing is tailor-made for the silver screen. There’s something in [ ... ]
us-sports
The Luckiest Man On Earth: When Lou Gehrig Bid A Fond Farewell...
In the Friends episode, The One Where Old Yeller Dies, the character Phoebe Buffay (Lisa Kudrow)  [ ... ]
motorsport
Why NASCAR Maverick Wendell Scott's Battle With Bigotry Is As...
It is less than two weeks after the assassination of John F Kennedy. On the dirt oval at the Jacksonville [ ... ]
sports
From Daring Sea Rescues To Shunning Hitler: The Greatest Acts...
Nothing warms the cockles and brings a lump to the throat as seeing, hearing or regaling acts of sportsmanship [ ... ]
football
Sun, Sand And Bicycle Kicks: The World Of Beach Football Deserves...
The dying minutes of the game, down one goal. Former Liverpool midfielder Jamie Redknapp composes himself, [ ... ]
boxing
From Hammering Holmes To Blitzing Berbick: Mike Tyson’s Five...
With a boxing comeback in the pipeline, a hugely popular podcast and a 400-acre cannabis ranch opening [ ... ]
boxing
Cassius Clay vs The United States: The Greatest Fight Of Muhammad...
On June 20 1967, it took an all-white jury just 21 minutes to find Muhammad Ali guilty of draft evasion. [ ... ]
boxing
Assault In The Ring: The Dirtiest Boxing Match In History
On June 28, 1997, Mike Tyson and Evander Holyfield shared arguably the most infamous night in boxing’s [ ... ]
sports
The Sportsman Interviews Anthony Curcio, Football Player And...
Anthony Curcio is the world’s nicest bank robber. Friendly, talkative and generous with his time, [ ... ]
football
From Van Basten's Volley To Müller Magic: When The Olympiastadion...
It has been 15 long years since a football was kicked at the Munich Olympiastadion in official club [ ... ]
tennis
History Makers, Record Breakers And Pimms: Why Wimbledon Is...
Weep in the realisation that this should have been the week of Wimbledon, arguably the most anticipated [ ... ]
boxing
From Knocking Out A Horse To Missing Gold Medals: Five Of Boxing's...
Boxing has had its fair share of pieces of folklore since the introduction of the Queensberry Rules, [ ... ]
boxing
Joe Louis, The Third Reich And The Most Politically Charged...
On June 22, 1938, with the world on the brink of war, two boxers from opposite sides of the Atlantic [ ... ]
motorsport
Fighter Pilot, Racer, Transgender Pioneer: The Brave Life Of...
Robert Cowell was naturally left-handed but forced to use the right at a young age. The child of a decorated [ ... ]
boxing
Blood, Guts And Determination: Remembering Lewis And Klitschko's...
After 44 fights, 41 victories, 32 knockouts and three heavyweight championships, on June 21, 2003, Lennox [ ... ]
boxing
The Brawl In Montreal: Sugar Ray Leonard’s Rude Awakening At...
Four decades ago, when the ink had dried on Sugar Ray Leonard’s contract to face a Panamanian [ ... ]
football
The Danish Club Giving Locked Down Fans The Ultimate Virtual...
English football fans got their first taste of the ‘new normal’ this week as the Premier [ ... ]
mma
Prevention Better Than Cure - Confronting Head Trauma In MMA,...
Oh, the ignominy. ‘Baby’ Jay Dee ‘The Prodigy’ Penn, an inspirational martial [ ... ]
sports
From Keano Vs Big Mick To Chicken Wing-Gate: When Players And...
The wonders of the modern world: the Taj Mahal; Kiyomizu Temple; Fenway Park. The home of the Boston [ ... ]
football
Henry, Rodgers And Klopp: Remembering Liverpool’s Love Affair...
“We're here to win,” declared Mr. John W. Henry, in November 2010.  The Liverpool [ ... ]
golf
Flying Kicks, Epic Insults And Hilarious Advice: The Very Best...
“He is who he is. You can ask him about anything and he’s never going to short-change anybody. [ ... ]
motorsport
James Hunt: The Motorsport Maverick With The Playboy Persona
James Simon Wallis Hunt was born on August 29 1947 in Belmont, Surrey. The seventh British man to win [ ... ]
football
The Wrath Of Oliver Kahn: Germany's Greatest (And Angriest)...
'Der Titan'. 'Vol-kahn-o'’.  In order to get on his good side, we’d [ ... ]
sports
From Babe Ruth To Canadian Icons, The Five Priciest Pieces Of...
On June 19, 2019, a rare game-worn shirt from the Sultan of Swat himself, Babe Ruth, sold for an eye-watering [ ... ]
us-sports
Shoes, Rings And Billions: Michael Jordan's Chicago Bulls Revolution
On June 14, 1998, Michael Jordan won his final NBA Championship with the Bulls. Six months later, he [ ... ]
This website uses cookies
Cookies help us and our partners provide statistics. By browsing this website, you consent to the use of cookies in accordance with our Privacy Policy and Cookies Policy.
Accept & Close