Twenty-two and a half years, 1218 matches, three league titles, and an unparalleled seven FA Cups: on this day in 2018, ‘Le Professeur’ Arsène Wenger, the man who changed football in England, announced he was bowing out as manager of Arsenal F.C.

Though the later years were stained, strained and the Gunner contingent divided, when Wenger arrived in north London in August 1996, he was a bonafide managerial maverick. The Frenchman would revitalise how the game was played, in both preparation and execution with only Sir Alex Ferguson being able to legitimately claim to have been a better and more influential manager in the Premier League era.

“Have faith” he told his defender Lee Dixon shortly after his arrival.

Wenger’s first signings were from across the Channel, setting a precedent for his era. Remi Garde was signed on a free from Strasbourg. On the same day, a 20-year-old midfielder from Milan also arrived, this would be the man who would lead Arsenal to a historic unbeaten season in 2004. The footballer who would be named in the Premier League PFA Team of the Year for six consecutive years between 1999 to 2004. Patrick Vieira cost £3.5 million.

While Wenger avoided the defensive ethos of his predecessor George Graham’s reign, he retained the key figures who made up a substantial part of that backline, Dixon, Martin Keown, Ray Parlour and Tony Adams, the latter who would eventually be granted the unique position of winning the English league title as captain in three different decades.

In Wenger’s first full season at the club, Arsenal would celebrate the double achievement of their first league championship since 1991 and the FA Cup, the initial step to that managerial record of those seven times Wenger would win the trophy.

Under his watchful eye Denis Bergkamp and Thierry Henry, two of the most celebrated and beloved foreign imports in British football history flourished and illuminated the top tier. Though Bergkamp had been signed by Bruce Rioch in 1995, the Non-Flying Dutchman and Wenger were a match made in heaven, and epitomised the very heights of Wenger’s tenure; grace, skill, and ruthlessness. 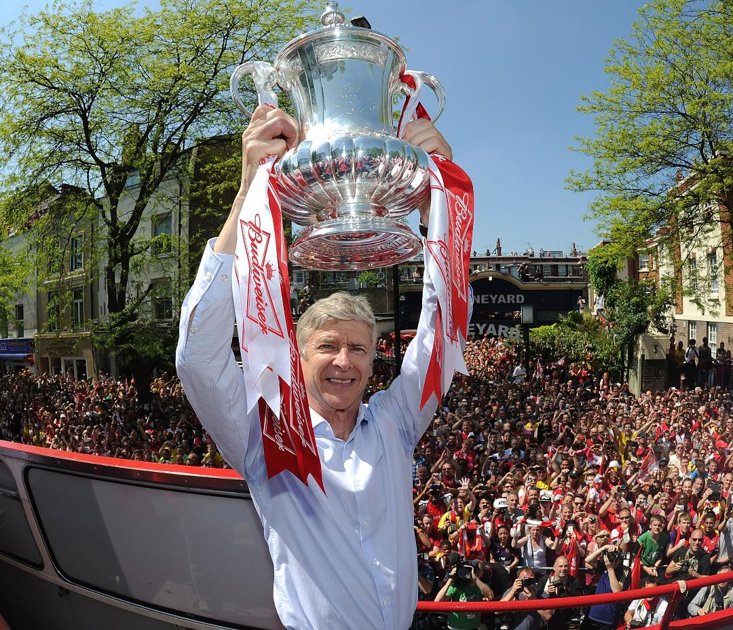 The brilliance of game day, however, was a result of the revolution behind the scenes. Wenger was meticulous with fresh, timed training exercises, brought in an osteopath and an acupuncturist, and redesigned the club's entire training centre with the latest state-of-the-art fitness equipment. Gone were the booze and fast food knocked up in the cafeteria. The ‘Evian-broccoli diet’ was in.

Former Arsenal player Paul Merson couldn’t speak highly enough of the Gunners gaffer. “He changed the face of football,” Merson stated in conversation with the Quickly Kevin podcast, “When he came in we thought he was Clouseau. It was unbelievable. You thought ‘this ain’t working’. But he was so ahead of his time.

“Straight away he took the beer out of the Players’ Lounge. All the lads were getting in early for work. People were flying into training at 9 o'clock. It was that good.”

There were a number of significant milestones of the Wenger reign. It was on Valentine's Day of 2005, Arsenal became the first English club to name an entirely foreign matchday squad, at the time prompting wide derision. Though unknown at the time, it would however, signal the direction the Premier League was heading. He also oversaw the transition from the historic Highbury, their home since 1913, to the Emirates Stadium, one of the premier football venues in Europe. The move between grounds however, prompted Wenger to adapt to new philosophies on the pitch, the success of which is debatable.

"When we decided to build the stadium I wanted to anticipate the possibility of financial restrictions, so I concentrated on youth,” Wenger said in an 2018 interview with The Independent, “I also felt the best way to create an identity with the way we play football, to get players integrated into our culture, with our beliefs, our values, was to get them as young as possible and to develop them together. I felt it would be an interesting experiment to see players grow together with these qualities, and with a love for the club.

"It was an idealistic vision of the world of football." 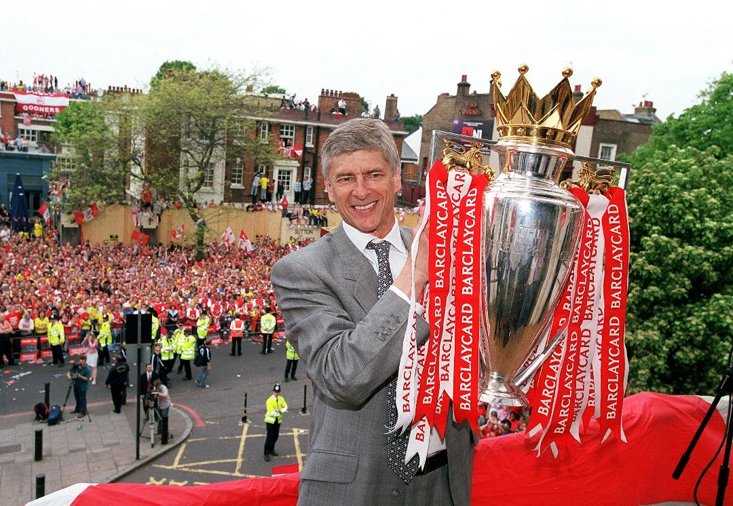 The Premier League had commissioned a unique gold trophy to commemorate ‘The Invincibles’ season of 2003/04, a feat that has yet to be emulated and marks the crowning achievement of Wenger’s career. Fittingly, he was provided the trophy as a parting gift from the club after his last home game (a 5-0 thrashing of Burnley) as manager on 6 May 2018.

When Wenger rocked up to N17 he was the gangly 46-year-old Frenchman from Japanese side Nagoya Grampus Eight, with specs to make Dierdre Barlow jealous and a taste for the films of Fellini and Fassbinder.

Almost a quarter of a century later, Le Professeur had finished his final lesson as one of the greatest managers ever seen on the precious stone set in a silver sea, and most importantly, as Wenger himself conceded in his departing statement, “managed with full commitment and integrity” and one last gift:

"My love and support forever.”