When ‘Brazil’ and ‘Formula One’ are mentioned within the same breath, the first person that comes to mind will highly likely be the late, great Aryton Senna. The world’s fifth most populous country has however had a propensity for producing some of the most talented to take to the track.

Like Senna, there’s another trip-champ in Nelson Piquet and a 70s star in two-time winner Emerson Fittipaldi. Most recently, Felipe Massa came agonisingly close to winning the F1 championship in 2008, losing out to Lewis Hamilton by a single point despite winning on home turf in the final race at the Autódromo José Carlos Pace, São Paulo.

There is of course another driver who should command equal respect, though perhaps challenging to discover the same reverence.

São Paulo son Rubens Barrichello set a new Formula One record when he had to wait 123 races before his first win. But when he did, in July 2000 seven years after his F1 bow, and nine after his last race victory (in October 1991 when he won a round of the British Formula 3 series) he became the first Brazilian since his close friend, compatriot, and mentor Aryton Senna to stand atop the podium. 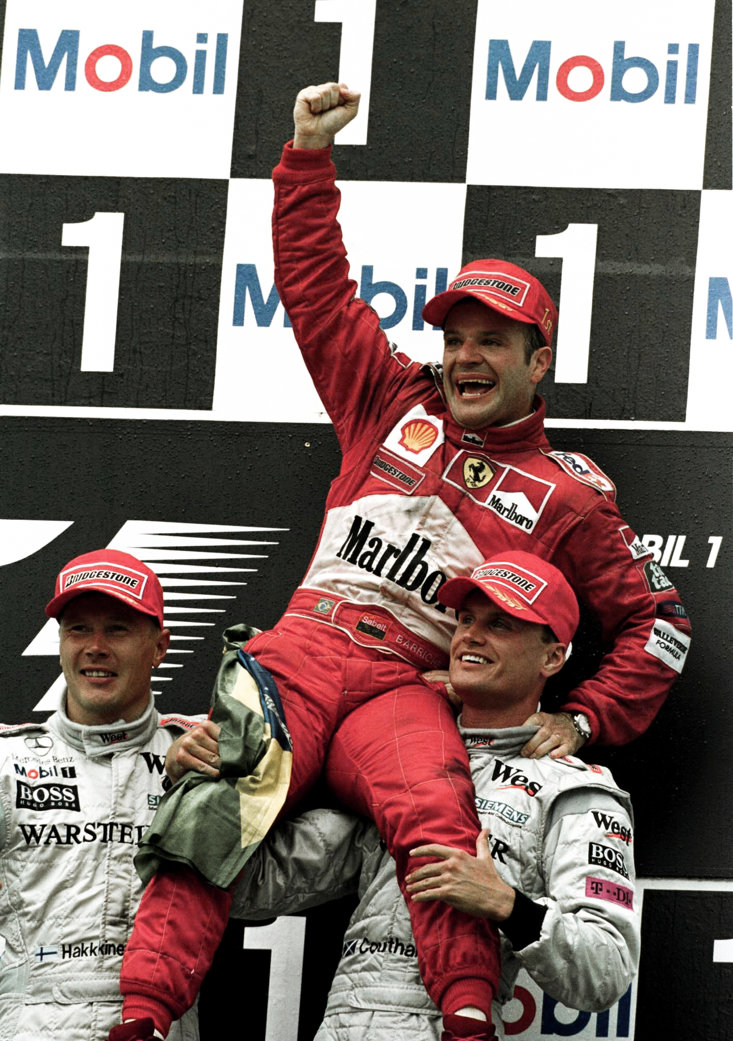 At Hockenheim 2000, Rubens Barrichello produced arguably the finest race of his career. At the beginning of a rainy German Grand Prix he was 18th. 45 laps later he flew by the chequered flag first, anointing his respected status as a wet-weather weapon, having remained on dry tires for the victory.

Barrichello, who retired in 2011, still holds the most starts in F1, with an impressive 322. The Brazilian won 11 Grand Prix for two different teams in an 18-year F1 career: nine for Ferrari and two with Brawn GP.

“I’m dedicating this race to a guy on top there, Ayrton,” Barrichello said in the glow of that first win, “It was since 1984 that he changed my life. I was really a racing driver from then. I followed him very much. He (listened to) me quite a lot, and today is a good day to dedicate the race to him.

“There is no one who just likes Rubens: either you love Rubens or you hate him.” 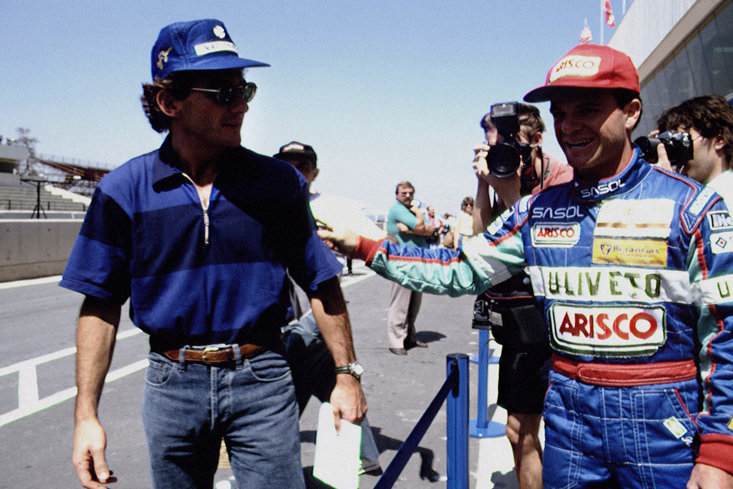 There was, however, another, who ‘Rubinho’ had to consistently battle to escape the shadow, and whom he almost came to devastating blows with.

Despite his longevity of close to two decades of competition, Barrichello’s zenith would ultimately be two second place finishes in the World Championships, the silver spot being achieved in both 2002 and 2004. The man he finished behind was the impervious German, the two having become teammates after Barrichello joined Ferrari at the turn of the millennium. Schumacher would notably go on to dominate the early part of the century, with five straight titles between 2000 and 2005 with the Prancing Horse.

In ‘02, Barrichello, though he ran four circuits to victory and achieved ten podiums, had almost half the amount of points of the victorious Schumacher. In 2004 he fared considerably better, with only 34 points less than his teammate.

The rivalry and competition between the pair was in some way baptised in the early part of the 1990s.

In his entire career, Barrichello started 14 times from pole position. In 1994 he proved his talent by roaring an underpowered and supposedly uncompetitive Jordan-Hart on pole position for the Belgian GP at Circuit de Spa-Francorchamps. The man he bested in qualifying on a wet track was the-then Benetton driver, Michael Schumacher. The margin - just 0.331s. 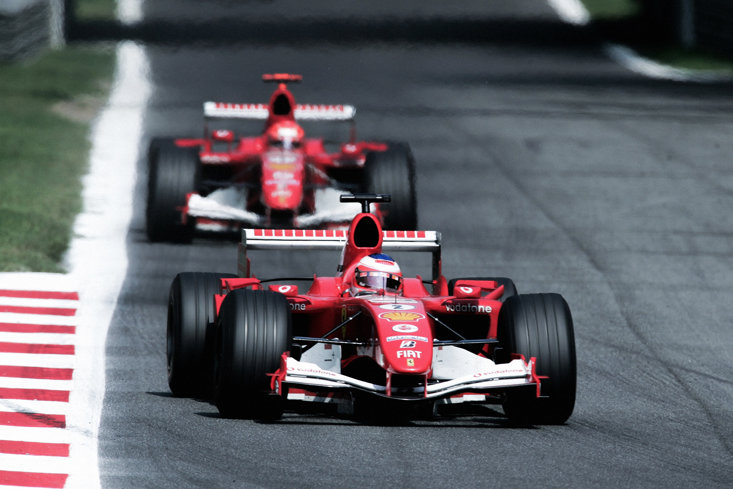 "I am lucky to be alive.

"If he wants to go to heaven, in the event he is going to heaven, I don't want to go before him.”

The two former teammates had almost collided in a memorable - though potentially calamitous - Hungarian Grand Prix. Barrichello, now driving for Williams, accused the recently unretired Michael Schumacher (Mercedes)  of virtual kamikaze-ism at 200mph. With Barrichello on the attack, five laps from the finish, Schumacher attempted to pin his ex-comrade to the wall with a late aggressive obstruction. Through simple virtue of the concrete ending, Barrichello escaped, unharmed, through his ire at the seven-time champion had peaked.

“It was a go-kart manoeuvre,” Barrichello proclaimed, "Thank God, I was lucky the wall finished where it did because I was millimetres from it.

"It was the most dangerous move against me that I've ever been through. It was horrible.

"What we want from racing is to have battles, but to be fair.

"I said to the stewards we are two of the most experienced guys out there, and if Michael does that, it means kids can do that too. I am just very glad and very lucky we're here to talk.

"I won't speak to him because it won't resolve things,” Barrichello continued, highlighting the rift between the two competitors, “You know Michael. He will always feel that he is right.

"But I'm a just guy and justice was done in a way because he has been away for three years and he hasn't changed a thing. He is still the same guy. What has been done to me is literally over the top."

Somewhat predictably, Schumacher believed he didn't do anything wrong. "There's not much to say,” he retorted, “I had a line of about five centimetres and I was making it obvious to him to go on the other side.

"But he chose not to. Certain drivers have certain views, then there's Rubens.”

Officials ruled with Rubens, Schumacher subsequently being handed a ten-place grid penalty that was applied at the next race of the 2010 season in Belgium.

Judgement of success is often isolated to tallying silverware collection. Rubens Barrichello did not have that World Championship, widely recognised as the sole marker of a driver’s greatness in Formula One.  But with remarkable, almost peerless, endurance, a tally of solid track records, constant consistency as wet-weather winner and refusal to be intimidated by a record-maker with seven stripes, alongside Stirling Moss, Barrichello can certainly take pride as one of the greatest F1 drivers never to lift the grandest prize.

Barrichello - one of the best from Brazil, alongside impressive South American panjandrums, and should indeed continue to be revered as such.