Football
Features
Torquay's Covolan saved his side in the most dramatic way in Sunday's play-off final
Conor Keane
09:52, 21 Jun 2021

Football, as everyone knows, is the beautiful game. It is renowned for producing shocking and wonderful moments, especially goals. They come in all shapes and sizes, and they all cause a passionate roar from the stands.

Goals can be made that extra special, though, when they are scored by the unlikeliest of heroes. Namely: goalkeepers. They are the key figures in preventing goals at the other end but sometimes they can become the heroes by delivering at the other end of the pitch. And we saw just that on Sunday when Torquay United’s Football League hopes were briefly kept alive by a fairytale equaliser from Lucas Covolan.

It got us thinking about some of the more dramatic goalscoring heroics from goalkeepers.

We have to start with the incredible goal in the National League play-off final on Sunday. The game at Ashton Gate was in its fifth minute of added time with Hartlepool 1-0 up and set to be promoted at Torquay’s expense when Covolan rose the highest as a long ball was thumped into the box. The goalkeeper’s header soared over his opposite number Brad James to take the game to extra-time and send the Torquay supporters into jubilation.

For the lateness of the goal, the delivery, the header and the occasion, it is simply one of the most dramatic goals to be scored by a goalkeeper. It was a shame it did not pay off though, with Torquay going on to lose on penalties.

The on-loan goalkeeper wrote his name into Italian football folklore when he threw himself at a 95th-minute free-kick to earn Benevento a 2-2 draw and the club’s first-ever point in Serie A. The sense of occasion was lost on nobody, with the late goal, the nature of the esteemed opponents and the run of 14 successive defeats which had preceded this fixture to start Benevento’s first sojourn into the top flight.

Brignoli will never be forgotten at Benevento and neither will his brilliant header. The way he rose and just seemed to tower over everyone else to meet the cross was a sight to behold.

A whole month before creating headlines with his astonishing ‘Scorpion Kick’ goal-line clearance, Rene Higuita was showing his flair in this Copa Libertadores semi-final first leg. He scored the only goal of the game when he stepped up to smash in a free-kick which sailed over the wall and rattled the underside of the bar before dropping into the net. It was a sensational strike which was hit with power and technique the like of which you would not expect from a goalkeeper, but Higuita was made of something different to traditional goalkeepers. Such an entertainer!

Chilavert was known for scoring goals on the international stage but this one in particular stands tall above the rest. In what was a crucial game in Paraguay’s quest to qualify for the 1998 World Cup, Chilavert’s powerful low drive was enough to earn Paraguay a significant point in Buenos Aires which helped propel them to a second-place finish in the South American World Cup qualifying group and a secured first qualification in 12 years. Even for Chilavert, this one was a bit special. 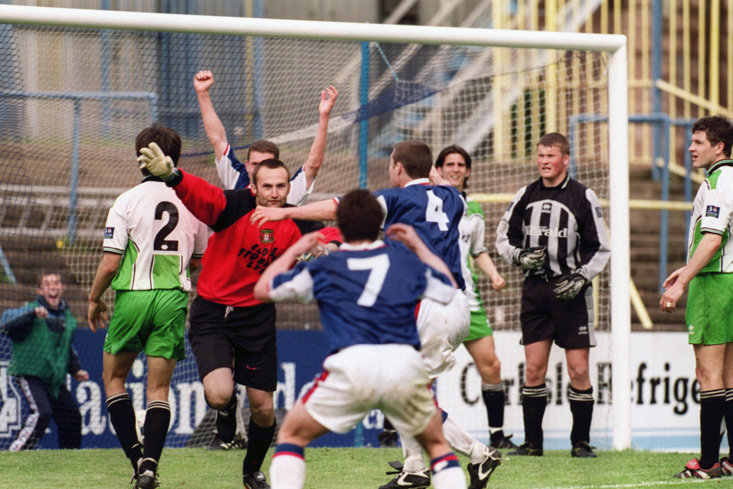 On the last day of the season in the English third division, Carlisle needed a win to stay in the Football League. With the game deep into added time and the crowd at Brunton Park extremely antsy, Carlisle won a corner and manager Nigel Pearson waved his on-loan goalkeeper Glass to get into the penalty area for one last throw of the dice.

It was as if fate was on their side and Glass was destined to be in the box for that corner. The ball fell kindly for him in the six-yard box and Glass fired it into the net on the volley, sending the home crowd into complete pandemonium. It was his last of just three appearances for the club, but what a way to say goodbye. The name Jimmy Glass is etched into the fabric of Carlisle – and English Football League – history now.

Following a turbulent season plagued with injuries and inconsistent performances, Liverpool could not retain or even challenge for the Premier League title and they were in an uncertain position with regard to qualifying for the Champions League. So when they travelled to the west Midlands late in the season, the Reds needed to won and hope other fixtures would go their way to keep them in with a shout.

In the 94th-minute, and with the score at 1-1, Alisson went up for a last-minute corner and guided the ball into the far corner with his head to steal the three points at the death. It was an incredible goal in how much it did for Liverpool’s qualification for the Champions League, but it was poignant too coming so soon after the goalkeeper had lost his father but could not visit his family due to Covid-19 regulations. This was a moment few could begrudge him.