It is somewhat ironic that an institution named after a renowned hero of the Trojan War would first conquer Europe by defeat of the Greeks.

The Dutch champions’ three-year domination of Europe had begun, and the concept of Total Football was ready to be cemented in football lore.

If Pelé and Diego Maradona are generally regarded as sitting atop the summit of football’s Mount Olympus, then Johan Cruyff is undoubtedly the first in the queue directing others climbing up to the peak. The above ethos as approximated by Cruyff helps define the importance of his and his Ajax manager Rinus Michels’ legacy and unrelenting vision upon the beautiful game. Appointed in 1965, Michels’ six-year reign turned Ajax into a European goliath. And he did it with a recognisable and wholly enviable style. When he arrived, the club were relegation fodder, attempting to avoid the top-tier quagmire. When he left they were champions of Europe.

Michels had wrung in the changes immediately, starting off by giving the players a pay rise, enabling football to be their sole source of employment. In Michels’ first season they won the Eredivisie title. The second, they defeated Bill Shankly’s Liverpool 5-1 in Europe.

Johan Cruyff was the epitome of the ethic Michels imposed and the resulting concept widely known as ‘Total Football’. Requiring each and every outfield team player to be comfortable in every position on the pitch, the result would be fluidity and the interchanging of roles. Michels himself described it as a ‘carousel of positions’. He had his perfect, almost ready-made Golem to act as its on-field proponent. Cruyff was a technically exceptional forward, flamboyant and aesthetically pleasing but far from over-compensating. Combined with an intrinsic passion, hard-heartedness and a leadership-imbued nature, he was Michels’ Dextera Domini. 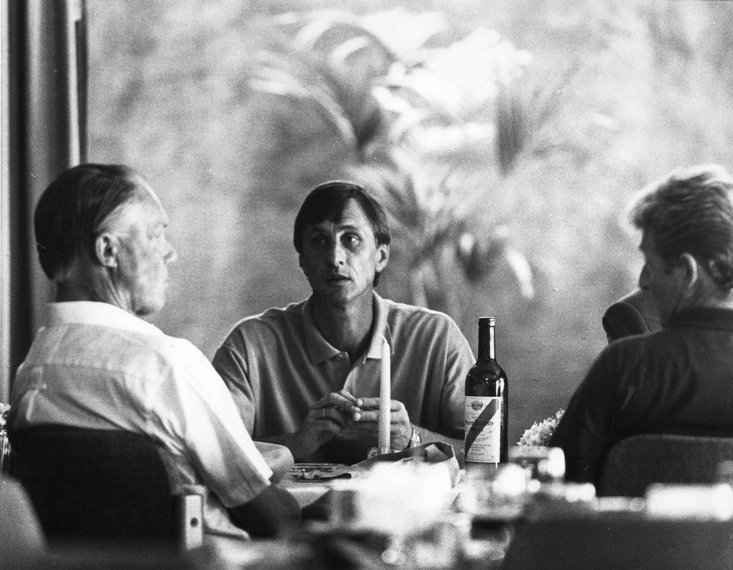 “Without Cruyff,” said Michels, “I have no team.”

"Of course, I had my own special qualities,” Cruyff declared, “But a team is formed by every player's different qualities – no player can do it on their own," he would say, "then, when every player is ready to give their all and use their special quality, then you get the maximum output and results."

The Ajax defender Ruud Krol further explained, "Michels made us run less and take over each other's positions, which was revolutionary. It was the first time there was a totally different vision of football. 'Total Football' spread all over the world. It was the only real change in football for almost 40 years. He stunned the world."

Also alongside Cruyff in that great Michels Ajax side of the late 60s and very early 70s was Johan Neeskens in midfield, a pioneer of the box-to-box role, an exemplar of intimidating and pressuring opponents. “[Neeskens] was worth two men in midfield," said team-mate Sjaak Swart (UEFA). The left-wing dynamo was Petrus Johannes "Piet" Keizer, a player who spent his entire career at Ajax from 1961–74, scoring 146 goals in 365 league matches. "If I wasn't playing, I would go and watch Ajax just to see Keizer," recalled midfielder Wim van Hanegem. Van Hanegem’s team? Ajax’ arch-rivals Feyenoord.

“At the start, Michels said, 'We are going to make Ajax more professional. If anyone is not with me in wanting more discipline and training, say so now, then you can leave.'

“His training sessions were always perfectly prepared. And he put the right players in the right positions. That seems simple, but it isn't. If I had become a coach, I would have done it just like him. I never had a better coach than Rinus Michels."

But before the holy grail and great glory, Ajax would have to suffer. They lost the 1969 European Cup Final to AC Milan at the Santiago Bernabéu Stadium and were then understandably seething and hurt when domestic nemesis Feyenoord became the first club from the Netherlands to win the sport’s biggest prize, defeating Celtic at the San Siro.

Revenge for Ajax however, would be swiftly forthcoming and four-fold: not only would there be the three-peat for de Godenzonen, but the second of those triple European Cup victories would be at ‘De Kuip’, the stadium in Van Zandvlietplein, Rotterdam - more formally known as Stadion Feijenoord.

First came Michels’ magnum opus at Wembley, though. With Rinus Michels having been the Mary Poppins figure to swoop in and improve the unhappy Ajax family, appropriately the opener was scored by Dick van Djik. Their second, a shot by Arie Haan that deflected off defender Anthimos Kapsis, confirmed their ascendancy to the European throne.

However, upon victory over Panathinaikos in London, Michels immediately left for FC Barcelona. "I have achieved everything that I could – it is impossible to do better," he said on his departure. His tenure had brought Ajax four titles and three Dutch Cups, and that first European title, in the space of just six years.

Michels’ successor Stefán Kovács picked up the baton admirably. Despite conflict with the Ajax board that reached its nadir in April 1972 after a goalless draw away to Benfica, a result that had confirmed their progress to the European Cup final but irked the Ajax hierarchy, Kovács would be the man in the chair for 50% of all of Ajax’s major successes in Europe.

Cruyff scored twice as Ajax overcame FC Internazionale Milano 2-0 in the 1972 final and the year after they beat Juventus 1-0 in Belgrade. With three successive titles, it’s a feat that was preceded only by Real Madrid, and followed by just Bayern Munich and Madrid, again. Kovács, by all accounts, was much less of a disciplinarian than Michels but implemented his predecessor’s blueprint with a steady hand.

In the mythology eulogised by Homer, the Greek hero Ajax died by his own hand, thus remaining unconquered. Though just a single top European title has arrived in Amsterdam since those three between 1971 and 1973, that legacy has remained intact, for many, Ajax, Michels, Cruyff and Total Football remain unequaled, unreplicated, and unbeaten.