Benfica B coach Renato Paiva lets out a sombre sigh and slowly closes his eyes, a man who has conceded defeat.

The Sportsman has asked Joao Felix’s first coach at the Estadio Da Luz whether he advised the youngster on his £113million summer move to Atletico Madrid.

“Yes,” he says, with regret in his voice.

While Felix has enjoyed a fine start to his new career at the Wanda Metropolitano, tipped by Marca to start the Madrid derby against Real on Saturday, Paiva believes a switch elsewhere would have been a better move for his talents.

“I said Manchester City or Barcelona,” he tells us in an exclusive chat at Mill Farm in Fylde after his Benfica side had seen off Hertha Berlin’s under-23s in the Premier League International Cup.

“I said City because of Pep Guardiola, or Barcelona because of the way they play. I think the characteristics of Joao are better in that kind of game.

“I respect... for God’s sake, I respect Atletico Madrid a lot,” he says. “But the idea of City I think was better for Joao, especially with Pep.”

Having just watched his young Benfica side play with vigour to earn their victory, Paiva’s love of beautiful, attacking football comes as no surprise.

He admires Diego Simeone’s set-up at Atletico and his success but a more defensive, patient style isn’t to his liking.

“For me, I came to Benfica 15 years ago and this mentality of winning, of pressing, that is the style I like,” he explains.

“I know Simeone has lots of merits as a great coach but I don’t identify with the way they play.”

Now one of the hottest teenagers in Europe, 19-year-old Felix has always possessed an extreme talent.

However, when he arrived at Benfica from fierce rivals Porto in 2015, he cut a forlorn figure, bereft of confidence having struggled for games. Physically, he was a slow developer, slight and wiry.

Paiva and his team built him up again to fulfil his serious potential and he’s shone ever since.

“I was with the under-17s when Joao came from Porto and I was the first one that worked with him, I was his first coach,” Paiva tells us.

“He arrived in a difficult situation because he didn’t play at Porto, he was very skinny and Porto wanted other kinds of players, bigger players.”

Having wanted him since he was 10, Benfica had kept his name on file and had been keeping a close eye on him. When Porto, stunningly, released him as a 15-year-old, the Lisbon outfit made their move.

“He came and was not so excited to play, but Benfica was very important and gave him a new life.

“Joao though, did his work and is responsible for everything that is happening now. In the first week of training, I was watching him working and exercising. I said to my assistant: ‘What do we have here? Are you seeing the same thing I am seeing now? What we have here is a diamond. How is it possible that this guy cannot play for Porto?’

“He did amazing things you never ever see - that’s what I miss. Every training session he did things that you didn’t expect, an unpredictable player, with lots of great attributes, both the technical and tactical. Even physically he’s very smart, the way he avoids contact. Joao is a complete player.”

Boasting supreme ability on a football field, it seems his personality and character are just as impressive. 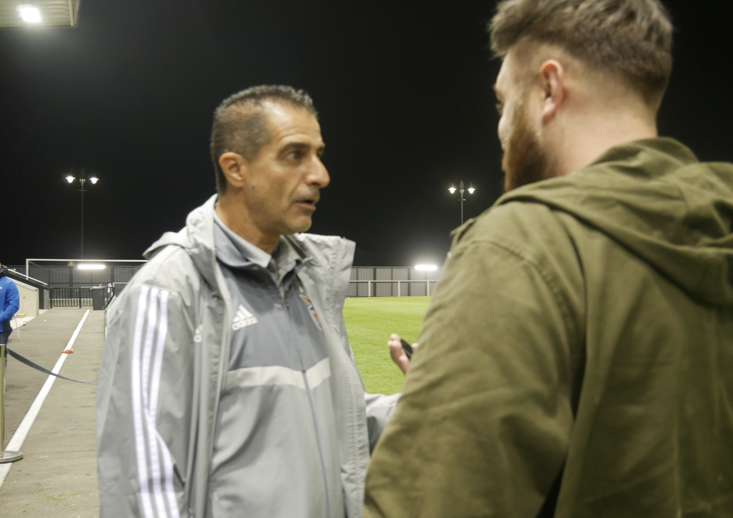 Courteous, gentle and modest, no task was ever too great for Felix. Hard-working, he did as he was told, always learning.

“He was a very humble guy,” he says with complete sincerity. “He grew and was now a professional in the first team. One time, when I was the under-19s boss, we played against his first team.

“When I arrived for the game I saw Joao, an hour-and-a-half before kick-off, speaking with coaches and directors of his former club. He had trained with the first team in the morning but had come down.

“He is a professional guy. After training, he doesn’t go to rest or go to the girls,” Paiva smiles. “He was there talking to them about his first moments as a player and is very, very humble.

“When he was in the B team, with two months of the season left, the President wanted to win the under-19 championship and Joao was the right age.

“The club said ‘Joao, leave the B team and come to play under-19s.’

“Most players would say ‘Oh, come on!’ and complain,” Paiva says, rolling his eyes. “Felix played, and was the top scorer of the under-19 championship. That is Joao.”

Having had Paiva guide him back towards the path to stardom,giving him a mental boost following his struggles at Porto, Felix showed his former coach his appreciation in the nicest, most poignant way.

“Joao made his debut, his first game as a professional and the day after he phoned me.

“He arrived and gave me his first shirt. He said ‘This is for you, thank you very much for what you did because you were the first coach here and I was very bad at that time.’

“This shows how good parents, good education and a good environment can help players.”

Paiva insists Felix’s success is “90% down to Joao” but without his help, one of the best talents of a generation could have gone completely to waste.

He might not have followed the path to the Camp Nou or Etihad which Paiva would have preferred, but Joao Felix has the tools for the journey ahead. And it’s all thanks to his first Benfica coach.