Boxing
Features
The heavyweight champ is a real trendsetter on the road
Elliott Bretland
16:00, 11 Nov 2020

Tyson Fury boasts a stunning car collection and knows his onions when it comes to motors. The heavyweight champion had to really, since he worked as a car salesman to make ends meet before his talent in the ring helped him realise his boxing dreams.

Talking of his early days as he strived to become a superstar in the ring, Fury told Behind The Gloves, “I would be selling cars and stuff. I sold a few cars, cut a few trees. Anything to try and get a few quid to pay my bills and look after my family.”

His father John was a used-car dealer, and Tyson would wash and clean the vehicles. However, that’s all a world away from the life he leads now; and one look at the kind of motors he currently drives tells you just how far he’s come...

Fury loves to stand out, and even though this came in camouflage, it still manages to do the trick. This SVR is the most powerful in the range, those initials standing for Special Vehicle Operations. Yes, we know there's no 'R' there, the R denotes the Range Rover's position as Land Rover's fastest and most powerful offering. The SVR comes with only one engine: a 5.0-litre, 542hp supercharged petrol V8 engine.

Tyson self-gifted this motor after he overcame his battle with depression in 2018. It was a comeback that culminated in his stunning seventh round victory over Deontay Wilder in their rematch back in February (we know, it seems much, much longer ago!)

In 2017 he was given a Range Rover Vogue Autobiography in white, with 24-inch wheels, thanks to a very generous friend. Oh, and he’s also the owner of a thumping Land Rover Defender, that set him back £38,000. 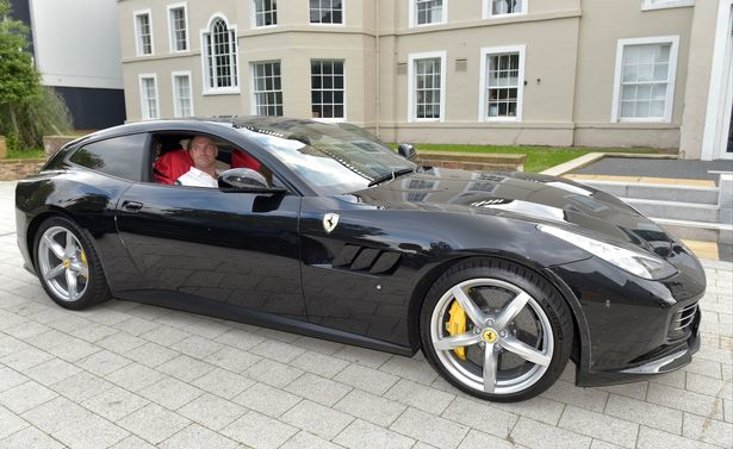 Fury loves a Ferrari, the two-time world champion has four different models of these supercars in his collection. His most recent purchase was a Ferrari GTC that set him back £300,000. He bought himself the treat after his February rematch with Deontay Wilder was confirmed, pocketing him a cool £3.7m for the fight alone. He actually raked in more than £20m in total for the bout, so £300,000 on a brand new Ferrari was small change for Tyson.

Fury snapped up a classy Mercedes G Wagon shortly after becoming the heavyweight champion for the first time and made it his own by etching in the letters GK, of course standing for Gypsy King. The car had blacked out windows and oozed ‘VIP’.

Boasting cutting-edge technology, the G-class is truly personal to the owner, fitted with Nappa leather and can be driven on or off road.

But we know it hasn’t always been a smooth road for Tyson Fury. In the months after he beat Wladimir Klitschko to become the heavyweight champion of the world for the first time Tyson’s life spun out of control. He turned to drink, drugs, and later said he contemplated killing himself by driving his Ferrari into a bridge.

With no big paydays as he battled his demons, Fury was forced to sell his beloved Rolls Royce Phantom and forked out £2,000 for an S-class Merc. 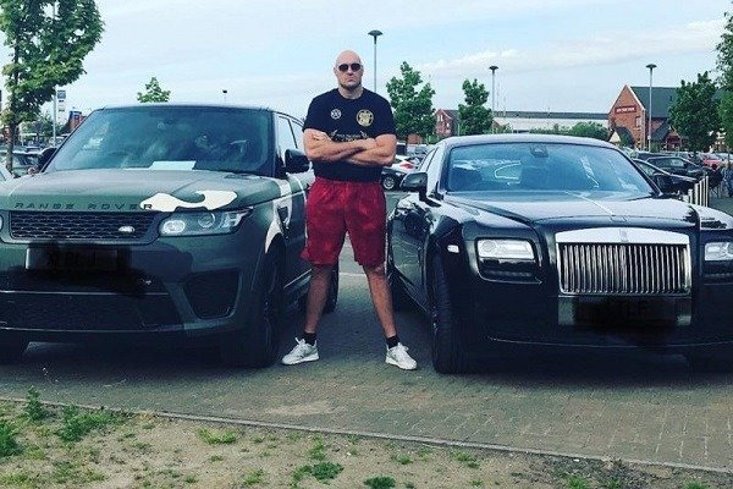 “When hard work and talent pays off. Washed in the blood of the lamb. Reaping the rewards of my glory,” Fury proudly told his 3.8m followers when he purchased an exquisite Rolls Royce Dawn in 2018, his second from the British engineers to go with a Phantom named Betsy worth £320,000!

“But I stayed focused and determined throughout my boxing career. I am dedicated to making a change and so can you be. Stay blessed and remember, sacrifice to achieve!”

The Dawn is described as ‘an emblem of spontaneity’ and ‘is for the individual who will never be tied down’ certainly fitting in with Fury’s renewed zest for life.

Ever the eccentric, Fury rocked up in his hometown of Morecambe over the summer in a classic red MINI Cooper. How he squeezed his huge 6ft 9in frame into the tiny motor we’ll never know. But squeeze he did, and he was caught on camera with his kids in the back and his knees pushed up to the steering wheel, exclaiming, “Hello there, everybody. Just thought I’d drive around Morecambe in my new car. Taking in the sights in a real iconic British vehicle… the MINI Cooper. Cherry red.” With a cheeky wink and a thumbs up to the camera, he drove off. Classic Tyson Fury.