Legendary boxing promoter Frank Warren will take centre stage this weekend as his documentary ‘Make It Or Die Trying: The Frank Warren Story’ airs on BT Sport. Currently managing the likes of lineal heavyweight champion Tyson Fury, Anthony Yarde and Daniel Dubois, there is no doubt Warren is still at the very top of the game, but this 90 minutes documentary shows the highs and lows of his 40-year career in the sport. The Sportsman were lucky enough to catch up with him to talk about the key moments in his life ahead of the documentary release.

A personal low to Frank and his family came in 1989, when he was shot twice after leaving a fight in London, an incident that would end up costing him a reported £8m and half a lung, but nearly cost him his life.

“It affected me,” Frank told The Sportsman. “At the time I was obviously two things. One - I was angry as you can imagine. Two, it had a major effect on my business. We were doing really well at the time we had built - bearing in mind when I started out we couldn't book a ring - we actually built our own arena, a 12,500 thousand seater arena, the biggest indoor arena in London at the time. I had done a deal for the arena as you probably heard in the documentary with a syndicate bank, that all fell apart. I lost nearly three stone in weight and went down to just over nine stone. And I had to discharge myself from hospital which I did, to try and get back in the swing.

“I'd given a lot of personal guarantee. I was worried about my family, I was worried about the future and all the hard work, I suppose coming from the background I come from, council flats and so forth, I wouldn't contemplate the vision of going backwards. I just wanted to get back in it and work hard, which I did, to resolve [it].

“I didn't dwell on it, cos if I'd have dwelt on it and if I wanted to get even - it would have ruined not only my family's lives but my life, and I had to move forward.”

Six years later Frank would be involved in any moment that shook boxing to its core. As underdog Nigel Benn took on Gerald McClellan, then represented by Don King, it looked as if Benn had secured an important comeback win, stopping McClellan in the tenth having been knocked out the ring himself in the first. 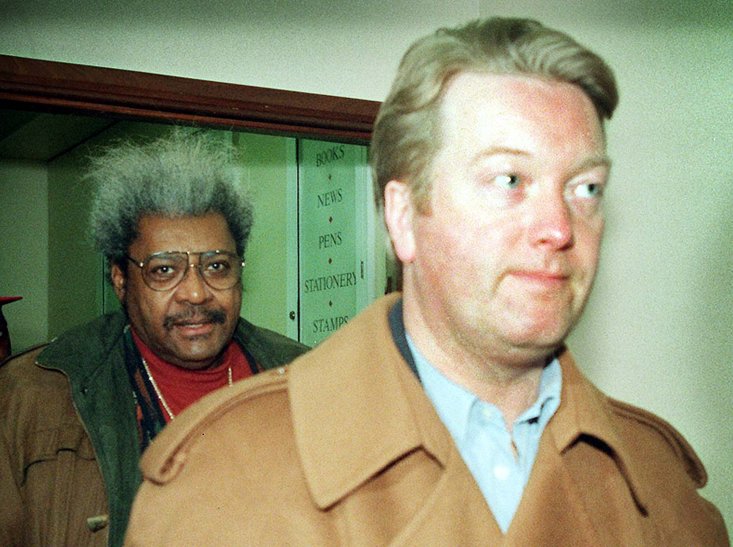 However, in a fight that would go down in boxing history for all the wrong reasons, McClellan collapsed in his corner and would go into a coma for two weeks. As a result of those injuries he is now blind, hearing-imparied and requires the use of a wheelchair.

‘The whole place, no-one sat down, it was like the most brutal, absorbing fight - it had the best and worst of boxing.” Frank said, reflecting upon the fight. “The lengths that fighters go to, what they have to give if they wanna come through, both those fighters gave everything and at the end of the day, one of them nearly gave his life, and certainly gave his way of life.

“It was a defining moment I think, that and the fight I wasn't involved in, the one with Michael Watson and Chris Eubank, but certainly around that time, they were defining moments in the way that boxing changed.

"Because it is a dangerous sport there's no doubt about that," he continued. “And my immediate reaction to it was that I didn't feel too good about it, I spoke with Adrian Whiteson who was then the chief medical officer of the board of control and I said to him - 'It is very hard to justify the sport.'’

“A little while after the board of control wanted all the boxers in the country to have regular MRI scans but no one would fund it, so I funded it. Because they had to have a basis, each boxer had to have an MRI scan, so every year they were checking on it, they had to see what happened to their brain in the course of twelve months. I like to believe that I helped in my way to make boxing better and safer than it was before, along with the British boxing board of control to make it more regulated.”

Having been in the business of boxing for over 40 years, Frank has seen almost everything, but even at the age of 69, that doesn’t mean he is ready to retire just yet. “Well sometimes it depends what side of bed I get out of!” he laughed. “Listen, it has been a crappy year, the last 14 months I've had three operations on my back, a disc replaced in my neck, my back, my shoulder - been in hospital for eight days with Covid-19, didn't feel too good about that. But the two things I kept thinking of, was the family and let's get back to boxing, because I missed it. I don't think there is any chance of me slowing down at the moment.”

Make It Or Die Trying: The Frank Warren Story, the next documentary in the BT Sport Films series, will premiere on BT Sport 1 on Sunday 11th April at 9.30pm