Golf
Features
When Tiger Woods swung himself into the stratosphere
Jack Porter
19:00, 07 Apr 2021

A stage has been erected. There’s an ill-placed armchair on either side of the PGA Tour stand.

A young black man walks up to the podium, head slightly down as he takes his position behind the microphone and in front of a garish Bud Lite beer logo. This man, big bountiful cheeks full of youth and vigour, wears a typically 90s ensemble, a dull black and green striped polo shirt emblazoned with an edged Nike logo. His hair, short back and sides, has been neatly trimmed, but the most eye-catching thing about this man-boy is the dazzling gold chain around his neck, contrasted by the uneven, slightly upturned collar providing a distraction. The soon to be familiar billion-watt smile on the face behind is concealed behind a cheeky, knowing grin.

For this young man of 20 was about to step out of the amateurs and into the pros. Not only is he about to enter a new realm, he’s ready to take golf along with him for the ride. 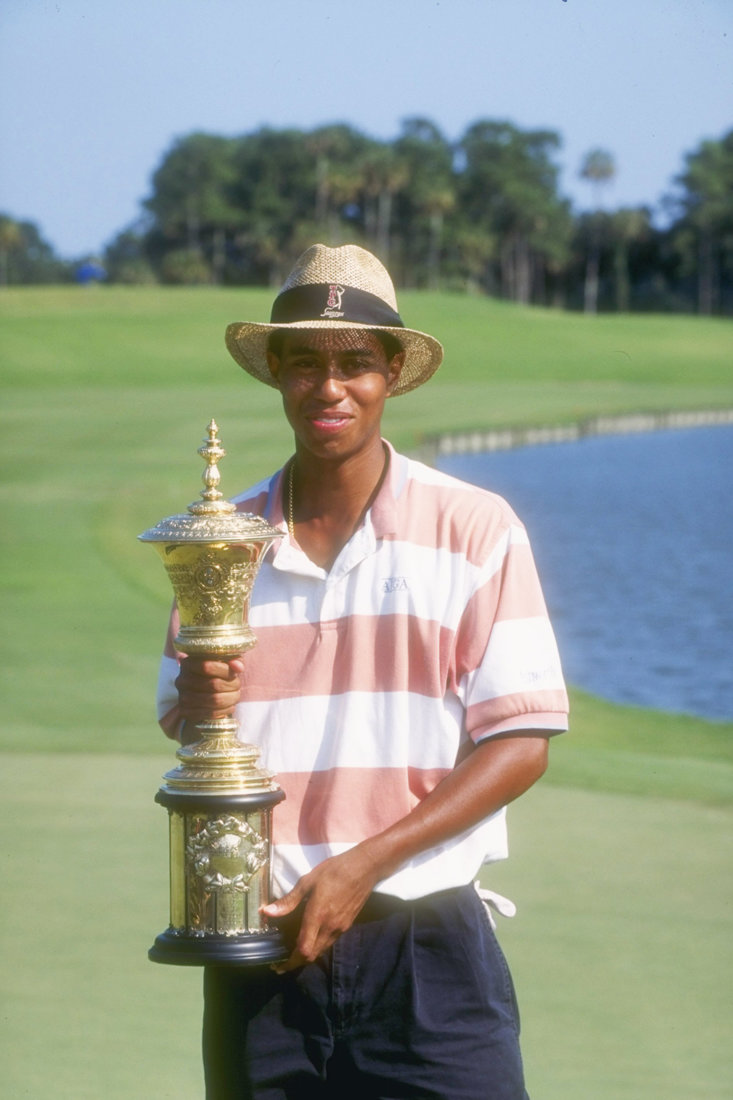 This was a world of Britpop, Bill Clinton, Brosnan’s Bond, Boutros Boutros-Ghali, and Buzz Lightyear.

1996 is ready to say goodbye to August, it’s the eve of the Greater Milwaukee Open and this 20-year-old soon to be global megastar Eldrick Tont "Tiger" Woods is ready to make his professional debut.

The young golfer is about to swing himself and the sport into the stratosphere.

The last full week of August marks the anniversary of the young Woods’ three consecutive victories at the U.S. Amateur Championships, achieved between 1994 and 1996. He was already hitting records before he became the man who went to claim 82 official PGA Tour events, 15 majors, and become the youngest ever achiever of the Career Grand Slam, the only player to have won all four professional major championships in a row. This was the final stage before the cub became Tiger.

“I wanted my final round as an amateur to be in the U.S Amateur Championship, which will be a day I will always remember, and also treasure for the rest of my life,” he told the congregated media and those plethora of lenses at the congregation just off Lake Michigan. With an on-cue quavering voice and wet eyes, he thanked his parents, reaching out to grab his father’s hand, who was now occupying one of the armchairs. He enunciated perfectly, highlighting the correct words, institutions and people. It was a masterclass in ticking boxes. A Stanford University student, he was done with taking lessons. Instead he was ready to provide them.

It was increasingly apparent to all those both in attendance and afar that this was the ready-made package, an almost factory-produced, millennium golf manifest. His ‘Hello World’ was already part of the Nike sell, which had allowed Woods to be one half of the most lucrative relationship in the sports’ history. He hadn’t yet got his tour card and was sitting on $43 million - far eclipsing the endorsement deals of the Number One in the world that year, Greg Norman.

Wood’s Wisconsin tournament itself is respectable, yet unremarkable. At Brown Deer, he shoots -7 for the tournament (67-79-73-68), including his first-ever hole-in-one as a professional on the 14th hole during his final round, to finish tied for 60th and earn $2,544. But the seeds are there for this great oak of golf. Woods competed in Milwaukee just four days after becoming the first - and so far only - person to win a third consecutive U.S. Amateur title.

The final of the 1996 Championship was played at Pumpkin Ridge in Portland, Oregon, with Woods of Stanford, the two-time defending champion, facing Steve Scott, a sophomore from the University of Florida. His opponent later recalled about playing against the young man who would become arguably the greatest golfer of all time, “Two things come to mind,” Scott said, via golf.com “The first is that by 7:15 that morning, the entire first hole was lined with people. They estimated there were 15,000 people out there watching us. The second would be the sound of Tiger’s golf ball coming off the club. It was just as crisp a sound as you could ever hear. I tried my best not to watch him - I didn’t want to get caught up in what he was doing in his golf swing - so I just listened to him all day.” 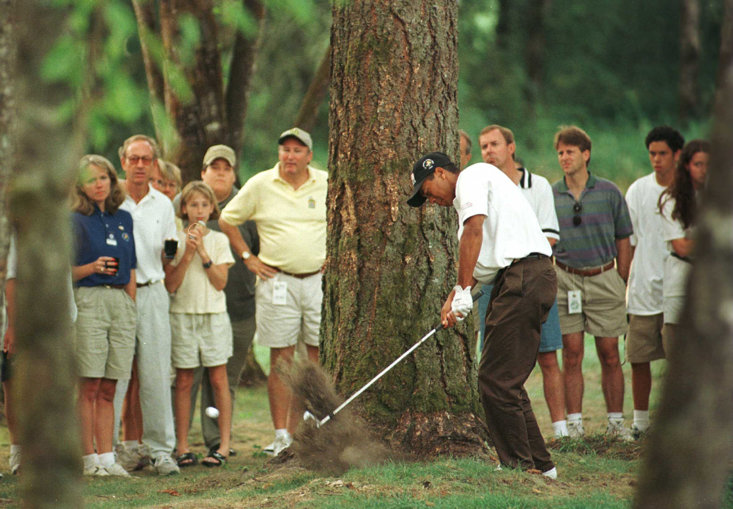 By the year’s end Woods would be named both Sports Illustrated's 1996 Sportsman of the Year and PGA Tour Rookie of the Year.

After completing his speech at Brown Deer, Woods opened up the room to questions from the press. In response to ABC Sports’ Roger Twibell as to what ambitions he had set himself for his PGA Tour career Woods said, “I do have my goals. Obviously to try to make the Tour.

“But anything more specific than that I can’t share with you.

“I don’t share with anyone my goals. That’s just me.”

We wouldn’t have believed it if he had told us.