“I read a staggering statistic the other day and it was that 0.004 percent of sponsorship money ends up in women’s sport.” Lyle & Scott brand director Ben Gunn tells The Sportsman. “Ultimately we need to shine a light on clubs who are bringing something meaningful to the game rather than brands calling the shots for quick fire returns.”

It was for this reason the iconic Golden Eagle fashion name signed a ‘ground-breaking, six-figure partnership’ with Lewes FC back in December, for The Rooks have been one of those teams for quite some time. It was back in 2017 that Lewes became the first football club in the world to pay their men and women players the same.

“Equality was the fundamental part of it,” Gunn explains of Lyle & Scott’s decision to get on board. “It's an amazing story to tell; they are a club actually trying to make positive change.”

While the men’s team have been in the Isthmian League Premier Division since their promotion in 2017, the women have been taking on Liverpool, Leicester City and Sheffield United in the FA Women’s Championship this season. And, as general manager Maggie Murphy explains, the east Sussex club have shown that it was no token gesture and teams really can pay their players the same wage and be successful in doing so.

“There were certainly some detractors that said it wouldn’t work,” she explains. “I think there were people that were worried that, by introducing equality, you were taking something away from the men's team. What was crucial was the men's team were promoted the season we introduced equality. That showed that equality isn't about making one side lose, it’s hopefully about creating one cohesive whole.

“It’s taken almost four years to prove that it's not a gimmick and that it's actually a way of life; a football club can operate and function [this way], and it’s not superficial.

“I also think the big deal wouldn't have come about unless we had that position with the women's team. We're now generating revenue streams that just were not available to the club if it was just a very traditional non-League men's football club.

“We knew we were creating change, we knew there was a culture shift, and we knew that things were getting better and we were doing the right thing. But the fact that, in the middle of the global pandemic, a major sponsor like Lyle & Scott came on board to back us was really validating.”

Lewes’ decision has certainly paid dividends. Not only are they spreading a positive message but they have also been noticed by a like-minded name keen to push the women’s game forward. Lyle & Scott's involvement isn’t about an annual donation while plastering a name on a shirt. The 146-year-old brand wants to make lasting change too.

“Lewes are a beacon in the sporting world,” says Gunn, who is fiercely passionate about highlighting the women’s game. “We really want to invest in British community initiatives, and this is an area that we felt we can generally support and add value to.

“I don't see it as an opportunity to just sponsor Lewes FC but as an opportunity to help them tell their story, to help support their journey but also create content opportunities to actually allow a much wider audience to appreciate the outstanding work they do. Everyone at Lyle & Scott is really excited about Lewes FC, we hugely admire what they've achieved to date and their commitment to equality.”

The brand shared a short film documenting the Lewes story back in January, while the financial backing allowed Lewes to add four ‘top-quality players’ to the women’s team. They currently sit sixth, above Crystal Palace, Blackburn and Charlton, three clubs who have also spent big money in the Premier League era.

The film documents the FA’s ban on women playing football which was introduced in 1921, and was only lifted in 1971. Monday 8 March is International Women’s Day and Lyle & Scott have retold the story to highlight the struggles female players have had to contend with.

Thankfully, in 2021, the sport is thriving thanks to such initiatives. More can still be done by the wider sporting world though, says Murphy, who believes the ban created stereotypes women in football are still dealing with today.

“What I would like in the future is that women don't have to have thick skin,” she says after former England player Karen Carney was subjected to social media abuse earlier this year after sharing an opinion on Leeds United as a pundit. “They can just be exceptionally competent and do their job. That's like the next frontier for me, that we can normalise women's participation in football and in sports so much that they don't need protection.”

It’s a viewpoint which gets agreement from Gunn, who was frustrated to see negative comments on social media recently, with people questioning why women would be paid the same as men. “It's still an ongoing conversation but there's not enough people challenging that.” he says. “It’s still left for the minority, but more and more voices are needed to challenge and to educate.”

For progress to be made even further and for the popularity of the sport to rise, Murphy believes the women’s game needs more visibility. 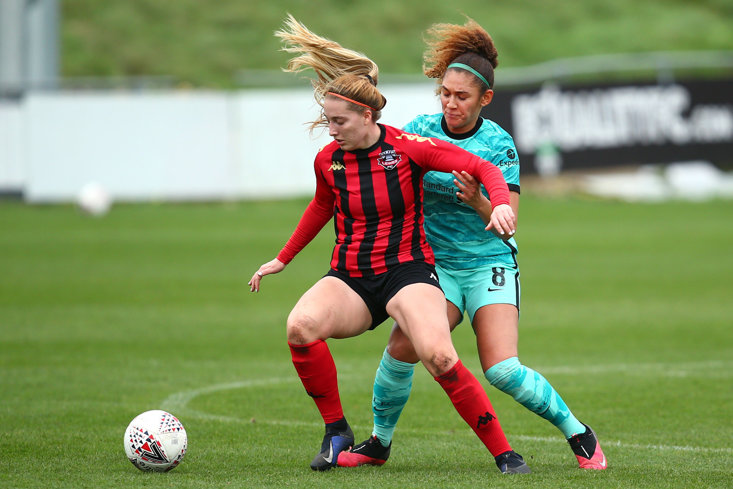 LEWES PLAY IN THE SAME WOMEN'S DIVISION AS LIVERPOOL

“I think until the visibility is increased you're asking people to read a book but you're only giving them access to a couple of chapters,” she says.

“The [2019] World Cup was really important in this country. The fact that it was on free-to-view television added a layer of legitimacy to women's football. It meant people could accidentally come across it and find themselves absorbed in it. When it comes to commercial deals, sponsorship, broadcast, it is a legitimate product worth investing in.

“Lewes FC is in a really great position to show what you can do when you think outside of the box. We need to have those partners, sponsors like Lyle & Scott. They have said ‘yeah, we see what you're doing, we back you and we want to support you.’ That's going to be crucial, but it has to be genuine investment in women's football and not a checkbox exercise.”

So far, Lewes and Lyle & Scott have shown what can be done if commercial brands and the sporting world alike showcase what the women’s game has to offer.