Rugby League
Features
The half-back took the advice of England's John Bateman before signing for the Knights
Kris Voakes
08:00, 24 Mar 2021

Brendan O’Hagan could have taken the easy choice. As Australia was coming out of the other side of Covid-19 last autumn, the UK was showing signs that there could be further lockdowns ahead.

He was progressing well as a half-back at Wests Tigers, learning from rugby league royalty in Benji Marshall, but when the York City Knights came calling with their big ambitions to aim for the Betfred Super League, O’Hagan was quick to make the leap of faith.

“Back in Australia everything was kind of sweet, almost fine really like it is now. When I got here I think I had about four days until we went into a lockdown, so I haven’t really got to experience anything like normality here in York. So I can’t wait for everything to open up so I can see what it’s really like.”

It’s already looking like it was a risk well worth taking. The 22-year-old was Man of the Match on his debut on Friday as the Knights beat Sheffield Eagles 30-6 live on The Sportsman in the first round of the Betfred Challenge Cup. But York have a former Wigan Warriors star to thank for their new hero taking the plunge in north Yorkshire.

“John Bateman was at Canberra in my last year, and I had conversations with him about York,” explains the former Newcastle Knights and Canberra Raiders star. “He had a lot of good things to say about the city of York and stuff, saying how beautiful it is, and I've now understood completely what he means, it’s such a great city.

“And also just the conversations about James Ford, our coach, he had some good things to say about him, so it just made my decision a lot easier, I just felt comfortable about the move having the things that he said to me about coming here.”

O’Hagan had a hand in many of York’s best moments at the Keepmoat Stadium last Friday, prompting Ford to joke that the skilful half-back had played “rubbish” in a bid to keep him off the radar of other clubs. His early form belies his lack of preparation over the last 12 months, with his 2020 season in the Tigers’ reserve ranks having never got started.

“The New South Wales Cup season got cancelled so it was obviously crazy for everyone, but that whole stand-down period when Covid hit, you had to work hard away from the game and try to keep at it as much as you could. I knew I was going to go back at some stage, or I was going to come over here, I just had to put my head down and try to keep training really.

“Obviously life gets in the way, and you don't often get a year off football, so I tried to enjoy it as much as I could, but I just tried to get my head down, train as much as I could and try to come over here in the best shape I could.”

Having trained hard during the down time, Brendan arrived in York to find a club really going places, with a star-studded squad built to succeed in the Betfred Championship and the fantastic new LNER Community Stadium to call home.

“The city is unreal, and obviously the club as well itself, the way [Knights chairman] Jon Flatman’s going with the club, it’s taken so many good steps forward, it’s such a well-run club, it’s just made my transition over here go so much easier.

“The stadium’s unreal, the atmosphere it’s going to bring when we’ve got crowds in there is just going to be unreal. There’s a few cafes, restaurants, the shops around the corner, there’s 10-pin bowling, a cinema, so you can just really make a day out of it. It’s so good for our community to have that. With the tourism York gets, it’s just going to skyrocket I think.

“The city definitely deserves a push for Super League or just even have a good year and it’ll be good to get the fans back in now and get them involved, it’s been a long time for them as well.” 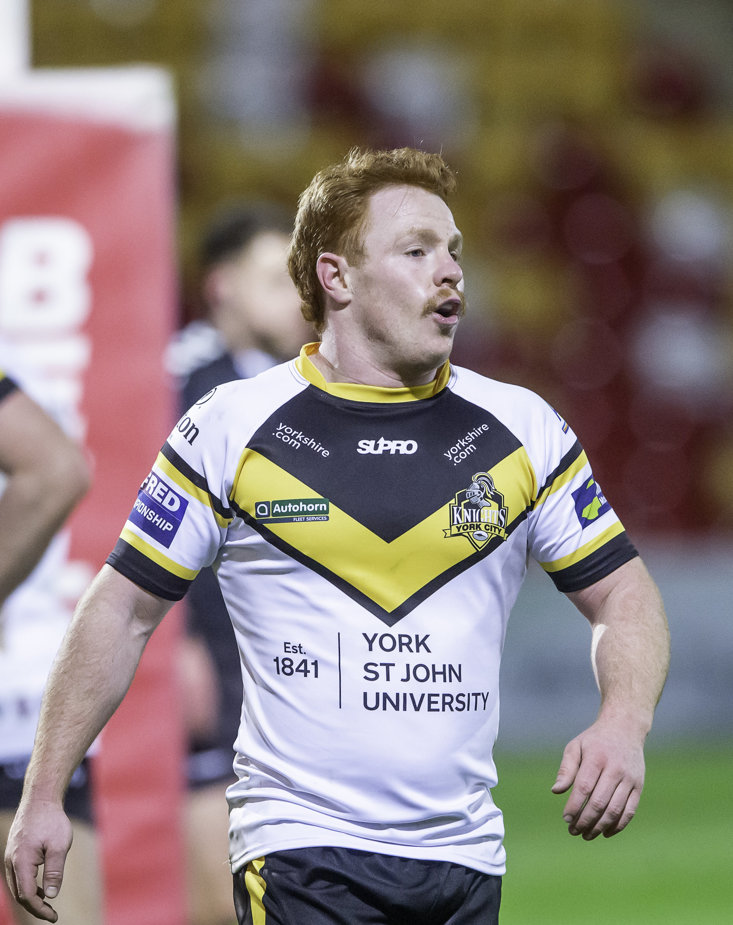 One win might have been enough to take the Knights through to a second-round clash with London Broncos, but it wasn’t sufficient to satisfy James Ford. The coach told The Sportsman after the game that his side were “nearly good” and warned that they must get better over the course of the season. It’s a sentiment O’Hagan agrees with whole-heartedly.

“I think everyone in the side thinks the exact same really, I think there's a lot of things that we need to improve,” he explains. “In the sheds everyone was straight away talking about ways we can improve, so I think the culture is really good.

“We’ve got a lot of leaders in the side that like to talk and we all want to get better as a squad. I think we're all on the same page, and it's a good sign for the club.”

Having already taken a huge leap of faith, moving halfway around the world at the age of 22 during a global pandemic, O’Hagan looks and sounds like the real deal. And having previously worked with the likes of Benji Marshall, Aidan Sezer, Jack Wighton and Blake Austin, this is a guy who has learned from some of the very best halves in the game.

York have a good one on their hands, no matter how “rubbish” his coach wants you to think he is.