One of the most iconic rivalries in Premier League history will resume at the Emirates Stadium on Saturday as Arsenal host Manchester United, even if this fixture is not what it was when both sides were fighting for the title. At that time, the animosity between the opposing camps was very real, with the games between the two sides often flaring up and producing unforgettable moments.

One of those moments came in February 2005 between Roy Keane and Patrick Vieira as the two captains had a fierce shouting match in the Highbury tunnel, an incident which ended with Keane infamous warning his opposite number: “I’ll see you out there.”

Our man Chris Sutton went to meet former United goalkeeper Roy Carroll, who was the man closest to Roy Keane as that confrontation unfolded. And when Sutton asked if he had seen the Irish midfielder that angry before, the former Northern Ireland international had a surprising answer:

“He’s not angry. Trust me. It’s not anger. It's preparing for the game the right way. Vieira was trying to bully our players and Roy Keane stood up for them and that's what it's all about. That's what you need in a captain. Roy Keane won the game that day because what happens in the tunnel you take out onto the pitch and we won the game.” 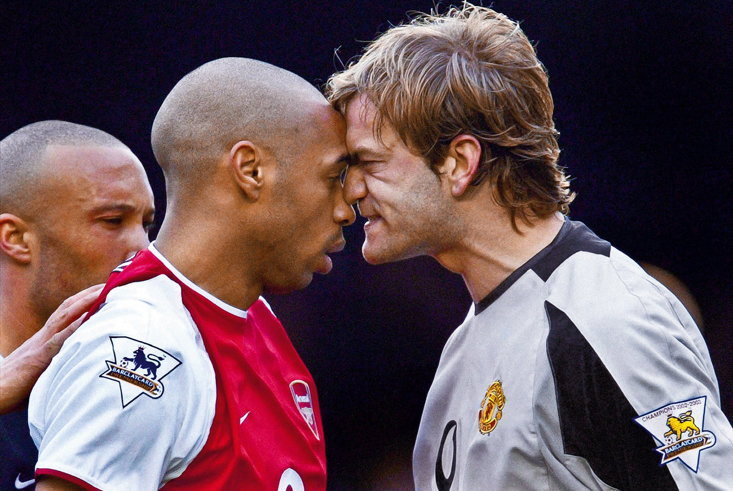 The passionate pair often tried to get the better of one another but Carroll believes it was six of one, half a dozen of the other when it comes to the blame game.

“It wasn’t guilty, it was just both captains wanting to win the game and Roy Keane was our captain and he was looking after his players and as I said, I was trying to calm Roy Keane down at the time and I was saying to myself, ‘I’m 23-years-old here telling Roy Keane to calm down.’”

It was a huge game in 2005, with the Gunners attempting to defend their title against both a resurgent Manchester United and a new threat in Chelsea and the goalkeeper did not need telling how big a game it was for Sir Alex Ferguson’s side.

“Yeah, the build-up for these games against Arsenal, because at the time big rivals Arsenal were fighting for the Premier League title at the time, Arsenal is one of those teams who are very good and have really good players so concentration was higher.

“It was a really serious incident that happened in the tunnel.”

Despite the intense atmosphere and importance of the game, Carroll claims the rivalry between Keane and Vieira was never personal.

Especially when you are playing at Highbury, it is a really tight tunnel walking down and there's a bit of shoving or whatever is happening down the tunnel, it was one of those days, we were ready to go out there and try and win the game.”

This article first appeared in The Sportsman on 29/09/19