Ken Rosewall may just be the greatest tennis player of all time. As Novak Djokovic attempts to defend his Australian Open crown and Roger Federer and Rafael Nadal sit on 20 major wins apiece, that may seem like an odd call to make, but what this man did over three decades is almost incomparable.

Rosewall won four times in Australia and gained the ironic nickname of ‘Muscles’ due to light 67kg build and tiny 5ft 7in frame. Unsurprisingly, he was one of the smallest players on the circuit and would’ve looked miniscule in comparison to the giants of today. But his size never held him back and, in fact, a lot of the time he was able to use it to his advantage.

The old legend goes that Rosewall didn’t get a bad bounce on any surface because of his low centre of gravity, which gave him quick movement around the court and, in turn, allowed his body positioning to always provide the perfect platform for a shot.

Although he burst onto the world scene at the age of 18 with his first Australian Open win, Rosewall's path to success had started from the age of three when he first picked up a tennis racquet. Although naturally left-handed, his father encouraged him to play with his right hand and this, according to Muscles himself, is what made his backhand so deadly. He told the CS Monitor in 1981, “As a right-hander, I was so comfortable and confident hitting my backhand with my arm going away from my body that I just didn't want to give that up.” 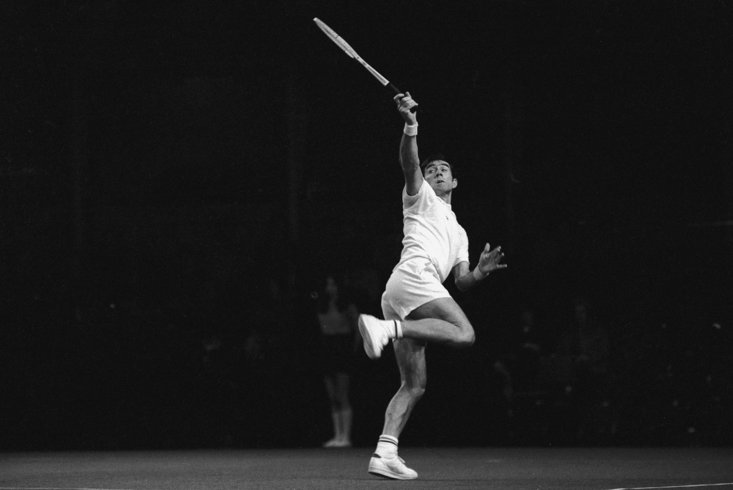 ROSEWALL WAS A LEFTY BUT PLAYED TENNIS RIGHT-HANDED

Aged 18 years and 2 months in 1953, Rosewall became the youngest-ever winner of the Australian Championships, as the Open was then called, a record that still stands today. In an all-Aussie final he beat Mervyn Rose in the final, before going on to win the French Championships in the same year. Muscles had arrived in style, gliding past opponents with his effortless backhand. He didn’t have a strong serve or powerful shots to rely on, but instead just his grace and talent with a racquet.

In fact, one of his rivals at the time, the great Rod Laver, has said of him, “Ken was a different kettle of fish, it was almost like he could go to bed hitting a backhand.” So it proved during the mid 1950s, as that backhand and his brilliant technique led him to another Australian Championships in 1955 against Lew Hoad. Those two would dominate the doubles game as a pairing, but it was Hoad who denied Rosewall a Wimbledon title, beating him in 1956. It was one of four career final losses at SW19 for Muscles, and he remains commonly known as the greatest men’s player to have never won Wimbledon.

We must consider that this was a different era for tennis, when players would often miss majors to focus on the Davis Cup as Rosewall himself did throughout his career with great success. His four Davis Cup triumphs are testament to the ever-changing priorities at that time. 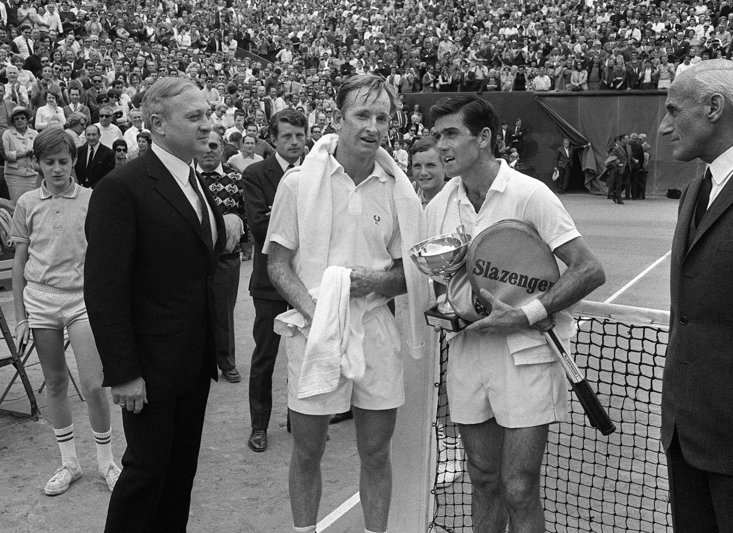 There is also one elephant in the room. During the peak of his career, Muscles wasn’t allowed to enter any of the Grand Slam tournaments or the Davis Cup after deciding to turn professional in 1957 after an offer from the legendary Jack Kramer. For the next 11 years, he played in exhibition matches and tournaments such as the Wembley Championship and the French Pro Championship, winning 12 finals in a row from the moment he turned pro. His level of dominance was remarkable and he surely would’ve carried such form into the 45 Grand Slam tournaments that he missed during this time given the chance.

In 1968, aged 34, the Open Era began and professionals were allowed to compete in major events once more. The big four tournaments were properly established, and modern tennis as we know it began. Muscles came back with a bang, winning the French Open at the first time of asking, even when most players his age were thinking about retirement. 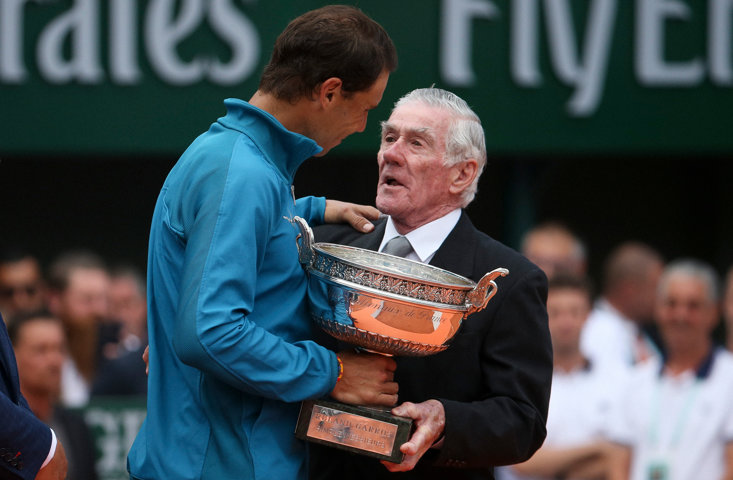 Then, in 1970, he became the oldest-ever US Open champion at the age of 35 and followed that up with back-to-back Australian Open titles in 1971 (without losing a set) and 1972. There was a record 19 years between his first and last Aussie Open successes and he kept playing until the age of 43. Relying on technical skill throughout his career rather than physical traits meant that even at that age, Muscles could still outwit his opponents.

Rosewall has played and won more tennis matches than anyone else in history, with 1665 wins in 2282 matches, and for 25 consecutive years he was ranked in the top 10 of men’s tennis. These are records which stand head and shoulders above the rest.

Only three men have won Grand Slam titles in three different decades. When Nadal and Djokovic joined the club in 2020, Muscles was already waiting at the bar.