Football
Features
As the genius edges closer to cracking another record, we look back to where it all began
Jack Porter
14:00, 04 Dec 2020

It is December 2000. Three men have congregated in the Pompeia del Montjuic tennis club cafeteria. One of the trio, a 53-year-old from Pedralbes, Spain, is being continuously pressured by his two companions to make a decision. Eventually, the man grabs a paper napkin, pulls out his pen, and writes:

“In Barcelona, on December 14, 2000 and in the presence of Messrs. Minguella and Horacio, Carlos Rexach, Technical Secretary of F.C.B. is committed under his responsibility and despite some opinions against signing the player as long as we maintain the agreed amounts.”

Rexach, a FC Barcelona legend as a player continuing his long association with one of the planet’s most powerful and potent institutions, has just become responsible for the single, most important decision in the Blaugrana’s history, perhaps in the history of the beautiful game itself.

Rexach has just added a 4’2” 13-year-old from Rosario, Argentina to the Barca books.

Though there would still be obstacles and hurdles, the results have proven most magnificent. The number 10, elevating himself past a 10/10. But for half a century, one record has remained. Untouched. Seemingly unassailable. With 643 goals in all competitions for Santos, Brazilian football legend Pelé hit an eye-watering benchmark. No one had ever before, or has since, scored as many goals for a single club.

But Messi sits on the precipice. After his stunner against Osasuna on Saturday, when he paid a heartfelt tribute to another great, Diego Maradona, Messi now sits on 641 goals for Barcelona. It is only a matter of time until this incredible record is broken, everybody knows that.

‘The agreed amounts’ referred to on the napkin were to be a two-year course of medical treatments costing upwards of $900 per month, a decision that many on the Barcelona board had concerns about. The cost would be more than any other Barca youth player’s salary at the time. The little Leo Messi had been diagnosed with Growth Hormone Deficiency (GHD) at the age of eleven, which worked his physicality in opposition to his evident natural ability, and had caused the elite clubs of Argentina to reject his potential.

Playing for clubs Grandoli and Newell’s Old Boys in his homeland, the latter at which he scored close to 500 goals in just six years, when Messi was nine years old, he just stopped growing. Leo and his father Jorge crossed the Atlantic to take a chance. 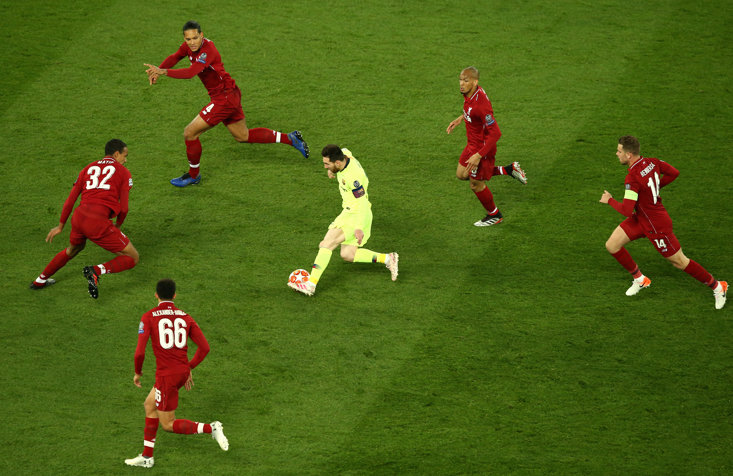 Messi swamped by Liverpool players in the Champions League

Even Rexach had had doubts. However a final trial game, wherein Messi faced off against contemporaries well outside his size and age group, made the eventual ultimatum in that cafeteria in Pompeia del Montjuic easier to answer.

"I got there at five o'clock and I looked and I walked about a little bit, I looked again,” Rexach described in 2018 of the day Messi first dazzled him, "Football is a team game, right? But this kid could play all on his own, he took the ball and beat other players and scored a goal.

"He had abnormal ability. All instinct. He was born to play football.

"So when I got back to the bench I said 'we have to sign him! That kid is from another galaxy'.

"Physically he was very small - a tiny little thing - but when you saw him play, he was something else. The same as he is now." 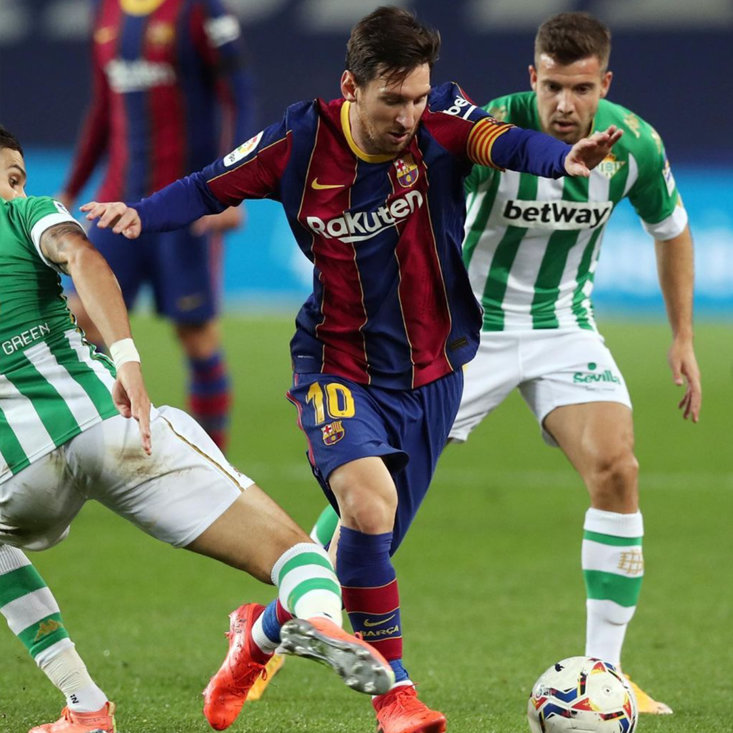 GHD is a disorder caused due to the malfunction of the pituitary gland located at the base of the head, usually responsible for the production of growth hormones which allow children to physically develop properly.

Almost exactly twenty years later, that teenager has become the player many consider the greatest footballer to have ever graced the game. He has followed in the footsteps of greatness, and now towers above the tallest titans. The captain of the team and has achieved every title with Barcelona on a collective and individual level. A ten-time La Liga champion. A quadruple of Champions League trophies. The unsurpassed six Ballon d’Ors.

And in September the Barcelona legend topped Forbes’ richest athletes list and reached $1billion (£760million) in pre-tax earnings. He’s amassed this wealth thanks to a huge salary, starting at £71million-per-year, but that doesn't include bonuses for winning trophies. Followed by fantastic endorsements with the likes of adidas and Budweiser, which included a short film titled ‘They Say’ to inspire fans to never give up on greatness.

“I’m excited to partner with Budweiser to share my journey that was based on a determination to be the best player I can be,” said Messi of his latest collaboration. “Day after day, year after year, it took sacrifice and hard work to reach my dreams. Hopefully fans around the world will find inspiration in my story to commit to their craft and never give up on greatness, no matter how hard the journey.”

Speaking about the partnership, Steve Arkley, Global VP, Budweiser, said: “Lionel Messi is a true icon and role model of his generation and for generations to come. His dedication and commitment to his craft reflect the same self-belief that has led Budweiser to become the King of Beers.

“We look forward to working together as partners to continue delivering on our ambition, reminding football fans worldwide that greatness is a journey that is worth the effort and determination.” 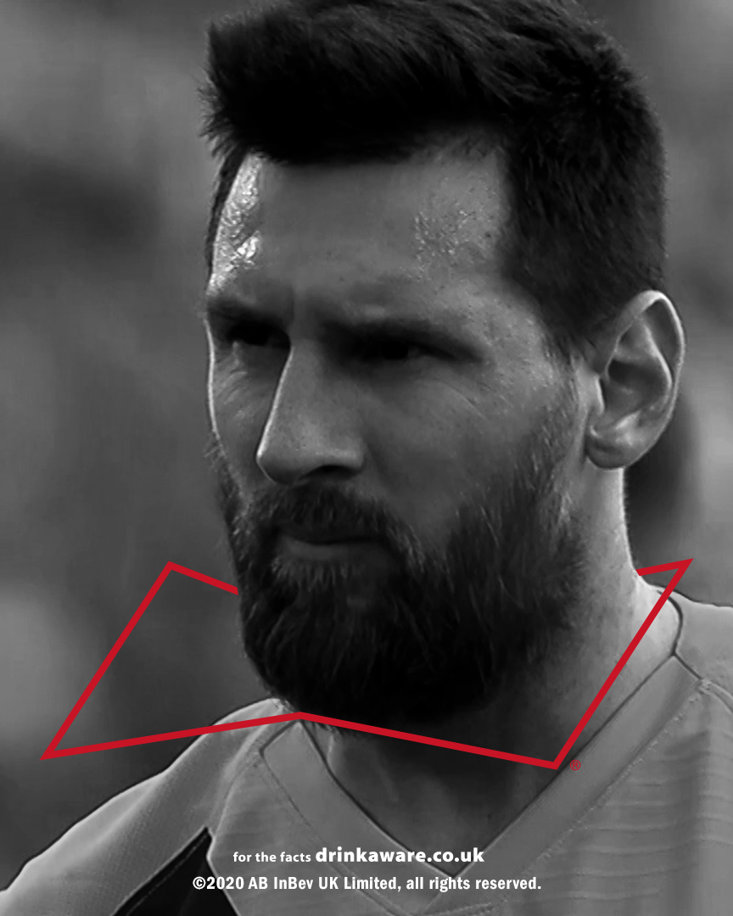 "When people hear Messi's story it seems like a fairy tale,” Rexach later recollected, "Yet to get there he really had to suffer. But this suffering made him stronger.

"It would be very easy for me to say that I knew what he'd become. But no. What I saw was that Messi was a boy that, if nothing happened to him - if he didn't go crazy or decide not to play football anymore or get badly hurt - he would surely become a player of the highest level.

"But the football played by Barcelona has been perfect for him too. Hunger has come together with the desire to eat. And of course, it is natural that this combination over the years has become explosive.

"If you add Messi with Barcelona and Barcelona with Messi, then this is the result."

The story for now goes on. And in case you were interested, that napkin remains tightly locked away in a bomb-proof safe of a bank.