Football
Features
It is 25 years since the memorable tournament got underway
Simon Lillicrap
06:55, 08 Jun 2021

Six years earlier, Stuart Pearce had fatefully missed a crucial spot-kick in the World Cup semi-final against West Germany. In 1996, he stepped forward looking for redemption in the quarter-final shootout against Spain. A packed Wembley took a collective gasp as he strode forward with the ball from the half-way line.

“I'd be lying to you if I said I wasn't a bag of nerves,” Pearce tells The Sportsman. “I think the important thing for me was actually to put myself forward and take a penalty - it was never even a consideration not to offer my services to take a penalty.

“But I've got to say there was a real nervousness in myself as you would expect at that stage of the tournament, but in all honesty I think the crowd were probably more nervous so I had a feeling that the tension within the stadium was quite incredible. The best part of 100,000 people in there that were absolutely willing me to score and not miss - I just felt that as I was walking up and I think the relief when that penalty hit the back of the net was there for all to see, not just for myself but more so the supporters as well.”

The celebration, which saw Pearce scream at the crowd as they roared him on, is still one of England’s most iconic moments. But how did the players and manager Terry Venables decide who would be stepping up to take the spot-kicks?

“Well, we’d done an ad-hoc practice leading into it, but there was no defined structure to who was going to go when,” Pearce revealed. “I thought it was probably prudent to go and see the manager as the game ended, we all came together near the centre circle and I just went up to Terry and said ‘Look, I will take the third penalty.’

“I think it took him a little bit aback if you like, with my history he didn't know whether I'd be volunteering I don't think. But, as luck happens, he went with it and I've got to say on the day we had some fantastic penalties. Some really good solid penalty takers within our ranks that took good penalties, and our goalkeeper we felt was the best in the world at the time. David Seaman was in incredible form, with great confidence, and we had a real confidence that he would keep at least one of their penalties out and that was the case.”

In fact, it was on this day 25 years ago that one of England’s most cherished tournaments of all time got underway. The Three Lions, criticised by many leading into that tournament, started off with a less than satisfactory 1-1 draw with Switzerland before a certain Paul Gascoigne changed the whole dynamic of the competition with a wonder goal against Scotland. 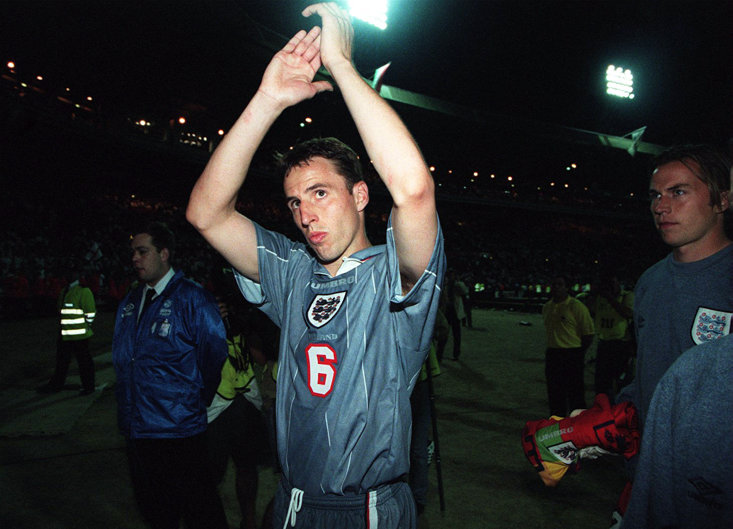 SOUTHGATE'S MISS WAS COSTLY FOR ENGLAND

“The changing point for me in the whole tournament was two, a minute or so apart,” Pearce, a key member of that side, tells us. “Dave Seaman saved a penalty and then Gazza has gone up the other end and scored a fantastic goal, one of the best goals England have ever scored, and it really changed the atmosphere within the stadium, it changed the dynamic of the group, it changed everything in regard to our fortunes as well, so if I was picking one defining moment it would be Gazza's goal - what a goal it was!”

Unfortunately for England and ‘Psycho’, their journey would end in a penalty shootout defeat to Germany at the semi-final stage. Pearce stood up once again and converted his effort, but it was Gareth Southgate who was the fall guy, as his missed spot-kick saw England out of their home tournament.

“He has always been somebody that would put himself forward and take responsibility, that has always been in his nature,” Pearce says about his former teammate and the current England manager.

“We always got on really well from the time we were in the squad together. He was devastated, as we all were as a group, as we felt as though with the momentum on our side and home advantage we had a real opportunity of going all the way in this competition. We also had probably four or five players who were on top form. Paul Ince was, David Seaman definitely, Alan Shearer, Teddy Sheringham was playing brilliantly. We had some real high performers and leadership within the group.

“Gareth was devastated and I like to think somewhere down the line we sat and talked through the evening and sat and had a meal at the hotel. It was probably quite comforting in some ways to have someone like myself when you sit across a table and say ‘I know how you feel’. Most people don't. Make no mistake, I did know how he felt.

“I decided to retire from international football after that tournament, albeit I was talked out of retirement a few months later, but it was in my mind that whenever we went out of that tournament was always going to be my last game for England, and emotionally that was a big thing for me.”

Pearce would play for England until the age of 37, and always gave everything for his country on the pitch. The penalty celebration just summed up how much the fans utterly adored him and Pearce cherished every second that he wore the Three Lions’ shirt.

“The proudest moment of my professional life is captaining England. It is leading England out at Wembley, it is representing England in these major tournaments that have got real fond memories for me. In all honesty, it meant a great deal to me to represent England before I even represented England, if you know what I mean, just to get that opportunity.

“Few people get the opportunity to play for their country. It is the biggest thing I have ever achieved in my life.”