Marcus Rashford certainly knows how to use his profile for the greater good. The Manchester United star, who boasts four million followers on Twitter, took on the government in a campaign for free school of meals earlier this year and even pointed people in the direction of where they could find food deals.

While so many hang on his every word and throw their support behind his various initiatives, he’s also a leader in the fashion stakes having quickly developed a reputation for both stylish and off-beat looks. Here we profile some of his best outfits and partnerships.

Rashford and Burberry joined forces in November to do more good. Fronting his first-ever fashion campaign, the striker partnered with the luxury British fashion brand after they championed his free school meal campaign.

Burberry are aiming to help youth initiatives and support underprivileged kids, and Rashford was happy to get on board, saying, “Burberry is the British brand with strong ties to the North of England, which is really important to me. It is very rare that I partner in a formal capacity, but what Burberry was offering was different. Burberry shared my vision in bettering local communities through investment in youth centres, which play a pivotal role in the childhood of many, especially in under-privileged areas.”

Rashford looked the part in the iconic brand’s tartan print, wearing a padded jacket and cream mac. Other pieces included a sharp blue suit and brown satchel, as well as a pink and red checked jacket. Fashion and football really can make a difference.

The England attacker’s first Nike appearances came ahead of the 2018 World Cup, and more recently he was unveiled as the new face of the sports giant’s underwear range in October.

In his initial link-up with Nike, Rashford donned Virgil Abloh’s cool collection, which included hoodies and a collared shirt and fused the look of a football strip with streetwear edge.

"The basic idea was to be inspired by the game of football and the aesthetic of the clothes,” Abloh said of the pieces. “And to create something that could work in a lifestyle capacity on the street and in a performance capacity on the pitch.”

Two years on, and Rashford himself is shining both on and off the field too.

The 23-year-old so effortlessly pulls off the streetwear look and is often seen wearing baseball caps. He enjoys a DSquared2 cap, having been seen wearing the Parachute Patch effort, the brand’s Born in 64 Baseball hat and also the Be Cool Be Nice cap.

However, while he looks the part, his hat-wearing hasn’t always gone down a storm. After losing the Manchester derby to rivals City last year, Rashford conducted his post-match interview in one of his DSquared caps but Old Trafford legend Ryan Giggs wasn’t impressed.

“He’s a young player, we’ve all done it… an interview after the game, you’re emotional, you’re not happy,” he said. “I don’t know why he’s wearing that cap, but that might be just me – old school, not like the modern footballer now.” There are no restrictions on when to look good, we reckon. 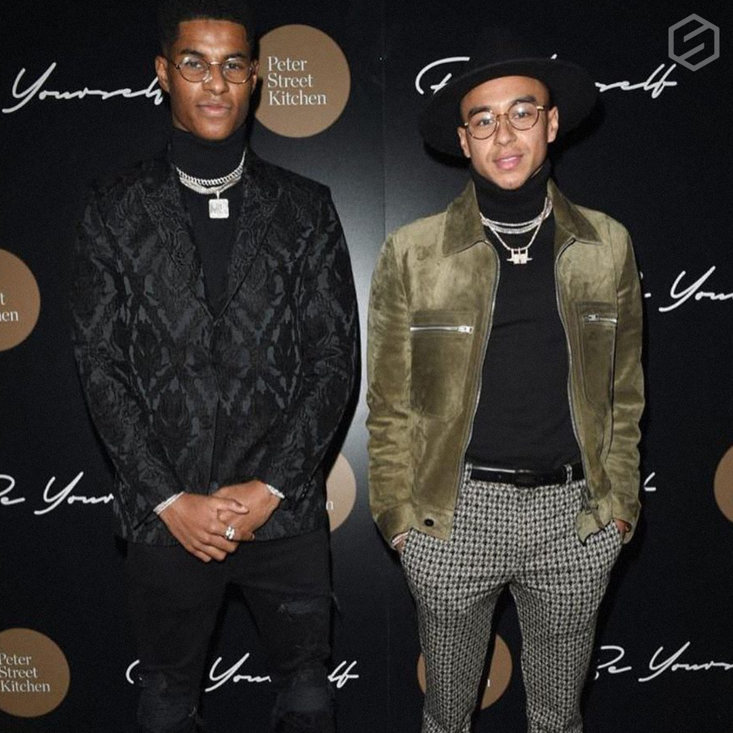 It’s clear to see Jesse Lingard and Rashford have been close pals during their time together as team-mates; pictured side by side at various events in some standout pieces down the years they looked the business in suit jackets when they appeared as pundits for BT Sport for a legends match last year.

While Lingard may soon be on his way out of Old Trafford having made just two appearances this season, the duo are likely to still team up thanks to fashion. When the midfielder launched his own fashion label, JLINGZ, Rashford was on hand to sign merchandise for fans at the unveiling of the ‘Be Yourself’ range.

Rashford has also been pictured in some fashionable leisurewear in the past, opting for a Gucci number when travelling in style on a private jet.

Wearing the brand’s GG web jogging pants and GG web technical jersey jacket, the look will have set the attacker back £1,440, according to The Sun. It’s worth it to look as cool as Rashford though, to be fair.