Football
Features
It took quick thinking for the eighth-tier club to cash in on their game with Spurs
Kris Voakes
14:00, 11 Jan 2021

There was an inevitability about the 5-0 away win on the pitch, but Sunday’s third-round clash between Marine and Tottenham Hotspur still managed to give us a glimpse of the FA Cup’s much talked-about magic, as the eighth-tier home side sold more than 30,000 ‘virtual’ match tickets to raise vital funds. And the FA should now take steps to ensure that other non-league sides get the financial windfall they need from such ties in future.

Faced with the possibility of missing out on gate receipts and merchandise takings in excess of £100,000, Marine took to offering supporters the virtual match tickets at £10 apiece as a way of recouping what they could from a cup run which had also seen their ties against Chester, Colchester United and Havant & Waterlooville all forced behind closed doors due to lockdown restrictions.

The tenner bought fans a raffle ticket, with the winner getting the opportunity to manage Marine in a pre-season friendly. There was also an option to add a £20 donation to the pot over and above the ticket cost.

The 30,697 ‘attendance’ will secure the club’s future for some time to come, and the FA should go about changing their rules when it comes to the distribution of gate receipts to ensure that similar ties in years to come result in a bigger pay-day for non-league teams.

In any normal year, non-league clubs receive a 55 per cent net cut from the turnstiles, with Premier League and EFL sides taking the remaining 45 per cent. But whereas a visit to Old Trafford would bring a share of a 70,000-plus gate, teams who are drawn at home to bigger clubs end up making far less out of the experience. 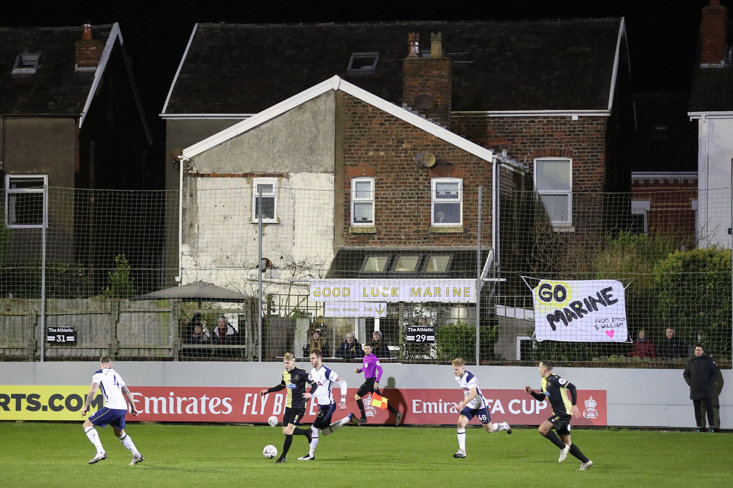 Had there been a crowd in Crosby yesterday, Marine would have made their £100k, but would it have hurt Spurs to give their 45 per cent to the home side? Surely the FA should prioritise the grass-roots clubs in just such a situation?

That’s why there should be provisions put in place within the FA Cup rules, ensuring that for any game which takes place between a non-league team and a side from the Premier League or Championship, the entire gate receipts ought to be offered to the minnows. But for nominal expenses, they should get every single penny.

Are Spurs going to look at their books at the end of this season and rue the lost £100k or so from the visit to Marine without fans? Of course they’re not, they’re going to look at the bigger picture. That’s why countless Spurs staff members, including manager Jose Mourinho, stuck their hands in their pockets to help out.

“I am buying one,” Mourinho told reporters ahead of the game. “If I win [the raffle], I cannot [manage Marine] because we have our pre-season. But the meaning of it makes me say yes to buying.”

At this stage of the competition, the FA Cup is not about Spurs, or Manchester United, or Liverpool. It’s about clubs like Marine, and Chorley. So the financial rewards should reflect that too, especially in a day and age when the bigger clubs get huge pay-days by the week while the grassroots remains a largely forgotten relic of a bygone era.

When crowds are back and cup ties are packed again, the struggling non-league clubs must be the ones who feel the benefit. It must not take clever thinking and a begging bowl to keep football clubs alive when they are going toe-to-toe with millionaires. Give them 100 per cent.