It was a moment that would change the history of both Arsenal and the Premier League, but few knew it at the time.

The date was August 3, 1999 and Arsene Wenger could hardly hide his delight. A fee of £11m had been enough to convince Juventus to part with Thierry Henry, whom Wenger had previously worked with during his time as Monaco boss. Hopes were high for the 22-year-old, although even his manager must not have been able to envisage the incredible impact Henry would go on to have.

"He is a young international striker who will be a great asset to Arsenal Football Club,” Wenger said of his compatriot.

“He has good experience of both club and international football and will considerably strengthen our firepower. Thierry is much more of an extrovert than Nicolas [Anelka] was. He is a team player who will work hard for the whole team.

"He has a good spirit and a good mentality for a young player and he has gained a lot of experience already at international level. He gives you a lot of options. He can play wide or in the centre and makes anything possible when he has the ball.

"Thierry has pace, power and great dribbling. I would like to move him into the centre either as the second striker or the main target man."

That last point would prove key. Prior to moving to Highbury, Henry had struggled to make his mark while being deployed on the flank at Juventus; the youngster managed just three goals in 19 appearances in all competitions during his brief stint in Italy, but Wenger clearly foresaw a very different future for him right from the start. 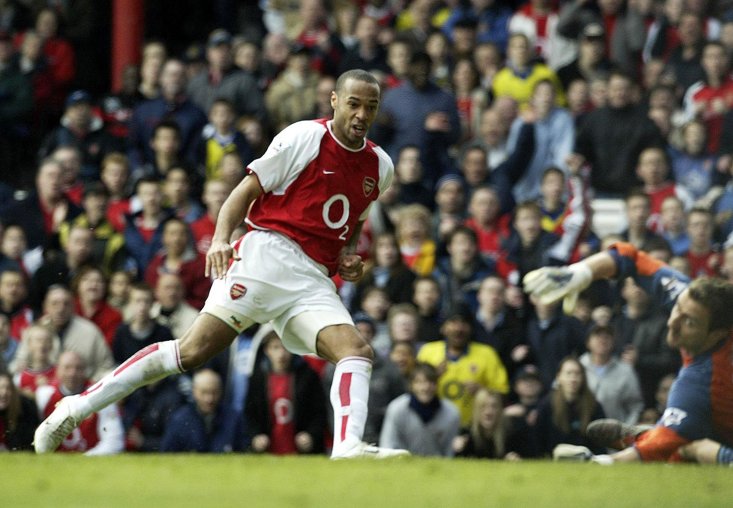 The results were not instantaneous. Henry struggled in his first few months in the Premier League, leading some to prematurely label him a waste of money. A return of two goals in his first 17 appearances was certainly a little underwhelming, but the World Cup winner gradually adapted to his new role and, by the end of his debut season, he had put the ball in the net on 26 occasions in all competitions.

From there, Henry did not look back. Twenty-two more goals followed in 2000/01, while the subsequent season brought 32 strikes as Arsenal claimed a Premier League and FA Cup double. Henry hit exactly the same amount of goals in 2002/03, before hitting his peak in the Invincibles year of 2003/04, when he made the net ripple 39 times across four competitions. By the time he left north London for Barcelona in 2007, Henry had racked up 228 goals to become the club’s all-time record scorer.

To many, he is also Arsenal’s greatest ever player. There was relatively little fanfare when he first arrived 18 years ago today, but Henry’s place in the history books – not to mention in the heart of every Gunners supporter who had the good fortune to see him play – is secured forever.