Boxing
Features
A cruiserweight classic so brutal it made a 23-year-old Evander Holyfield consider his boxing future
Kieran Spratt
08:55, 12 Jul 2021

The 1980s was a transitional period for the world of boxing. The fledgling cruiserweight division, inaugurated by the WBC in 1979, was having teething problems, like an awkward middle child sandwiched between the vastly popular heavyweights and light-heavyweights.

It was also the beginning of the end for the 15-rounder. A 1982 lightweight bout between Ray Mancini and South Korea’s Duk Koo Kim proved to be fatal for the latter and almost immediately the WBC issued a statement that future world title bouts would be reduced to 12 rounds.

There were, of course, still a few 15-round title fights to come in the 1980s, and no fight proved to sum up the blossoming cruiserweight division and the curtain pull on the last of the 15-round fights better than the first meeting between Evander Holyfield and Muhammad Dwight Qawi at The Omni in Atlanta, Georgia on July 12, 1986 (the rematch a year later would in fact be the last 15-round title fight ordered by the WBA). 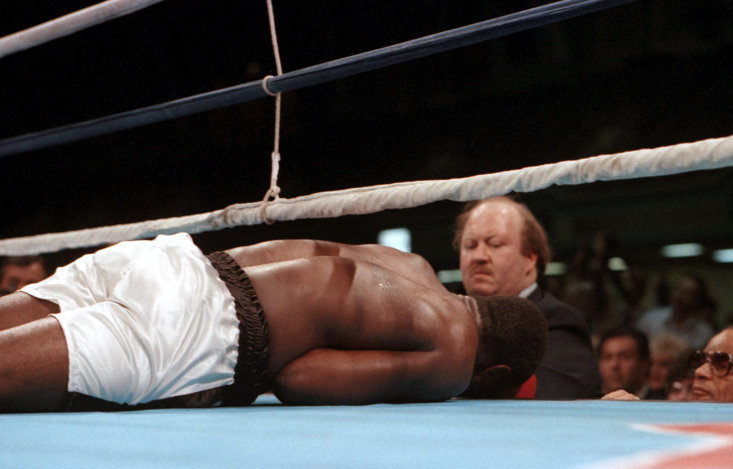 Holyfield and Qawi were at entirely different spectrums of their respective careers when the two put pen to paper on their summer showdown, aptly named ‘Pandemonium.’ Holyfield had only been a professional for less than two years, having won an Olympic bronze for the USA in Los Angeles in ‘84, picking up 12 wins from his first 12 fights - he was a hot prospect, but a clash with Qawi so soon in his career was considered a massive risk. Holyfield hadn’t even gone past eight rounds in his career at this point!

On the other hand, few fighters revelled in the sheer brutality of the sport like Qawi, whose ‘Camden Buzzsaw’ moniker was particularly fitting. At just 5ft 7in, Qawi would often rely on tenacity and ruggedness to wear down his often much bigger foes, eventually chopping them down like a lumberjack would a tree.

Qawi also had to learn the trade of prize fighting the hard way. Growing up on the tough streets of Camden, New Jersey, it wasn’t long before a 19-year-old Qawi landed himself in Rahway State Prison for armed robbery - the same penitentiary that former middleweight champion Rubin ‘The Hurricane’ Carter was, wrongfully, serving two subsequent life sentences.

It was inside the confines of ‘the Big House’ that Qawi learned how to box under the tutelage of fellow inmate and former light-heavyweight contender, James Scott - within three years of his release Qawi had captured the WBC light-heavyweight world title, with no prior amateur experience, and by 1985 had claimed the WBA cruiserweight belt.

Holyfield may have been lacking in professional experience compared to his more grizzled opponent but onlookers would have been forgiven for thinking they’d swapped roles pre-fight, with Holyfield boxing with discipline and keeping the dangerous Garden State-native at bay for the first two rounds. 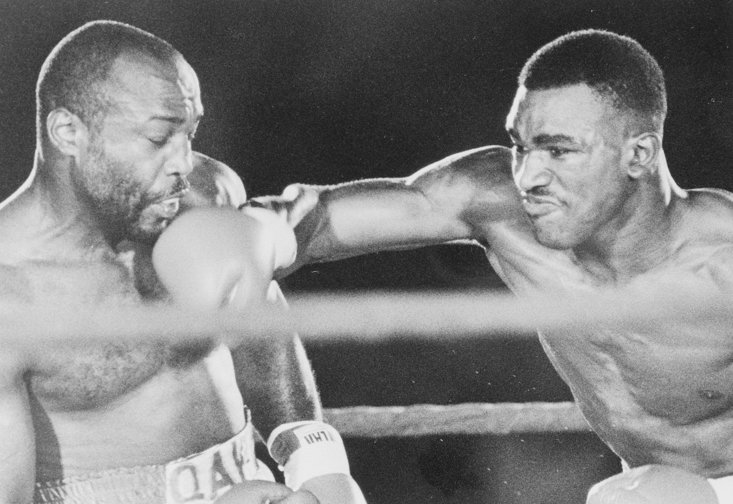 QAWI TAKES ONE ON THE CHIN FROM HOLYFIELD

The fight became more like trench warfare by the time the third stanza had begun. Holyfield could keep Qawi at arm’s length no more, and for every cleaner and more accurate punch thrown, Qawi responded in kind with much nastier, heavier blows. The shots to Holyfield’s torso were particularly rough and would have a knock on effect on the 23-year-old’s fatigue levels as the fight progressed.

Through the middle rounds it looked as if Holyfield’s daring assault for the WBA cruiserweight title in just 12 fights was perhaps a bridge too far at this stage in his career. Holyfield, the better boxer, was still winning rounds but it was clear the body blows had taken their toll. Qawi on the other hand looked as if he’d just turned up and could fight for as long as it took.

By the eighth, the roles had reversed once again. Holyfield delivered an unanswered 12-punch barrage on Qawi, showing that he still had plenty in the tank with seven more rounds to go. Holyfield had ventured into new territory and any questions over his conditioning past the unknown realms of eight rounds, were swiftly put to bed. This Evander kid really meant business.

The thirteenth round between these two men is among the crème de la crème of all-time cruiserweight fights. Holyfield began with a seemingly never-ending cascade of punches, before Qawi responded in kind. Holyfield then snapped Qawi’s head back with a sickening uppercut. Qawi’s response? To drop his hands by his sides and goad Holyfield into coming back for more.

The two laid it on the line for the last two rounds before the bell thankfully sounded, rescuing both fighters from the depths of a bloody war, which neither would ever forget. Holyfield would claim a split decision victory over Qawi but there wasn’t much celebrating on Holyfield’s part - in fact, he was considering quitting the sport. When all was said and done, Holyfield complained of headaches, was admitted to the hospital and had kidney problems due to severe dehydration. He would later claim to have lost 15lbs during the fight alone.

In total, 2,308 punches were thrown across the 15 rounds and the fight was unsurprisingly named by The Ring magazine as the greatest cruiserweight fight of the 1980s and the 46th best fight of all-time.

Holyfield and Qawi only carried titles in the weight class for a combined three years but on that humid night in July nearly 35 years ago, when these two warriors literally put it all on the line, that was the night the cruiserweight division was put on the map.