Football
Features
The constant issues over VAR are spoiling the enjoyment of football
Kris Voakes
14:30, 12 Feb 2021

“You’re a rugby league and cricket fan,” said a colleague. “What do you make of video refereeing?” It was a natural question on the day that it was confirmed that football’s top-flight leagues across Europe would begin using Video Assistant Referees in an attempt to improve officiating on the pitch.

My response was to raise the spectre of unintended consequences that we wouldn’t even begin to be able to fathom until they started to play out. Rugby league had taken a couple of decades to iron out some fairly significant kinks, while cricket had changed demonstrably from its former self since the addition of the DRS model.

In football the knock-on effects of VAR have become of arguably greater concern than the decisions being debated themselves. For every good example of VAR’s benefits, there are countless issues to be addressed about the consequences of its implementation. Those lobbying for video referees talked of a need to reverse ‘glaring errors’ by referees, but what we have right now is a system which is micro-managing decisions rather than interrupting matches only when it is completely necessary.

Would anybody have had a complaint about Patrick Bamford’s goal being given against Crystal Palace when the Leeds United striker was deemed to be an armpit hair offside as he pointed to the space where he wanted Mateusz Klich to play the pass? And when Eric Dier had the misfortune of having the ball hit the back of his arm when he was facing the other way against Newcastle, would that really have had the world in uproar had a penalty not been given?

There is nothing clear and obvious about most of the decisions being made by VAR right now, and more than that it is affecting the game as a whole. For a start, there are longer periods of dead play as a result of referee’s assistants being told to keep their flags down even for rather clear offsides just in case VAR needs to intervene, meaning play can continue for five seconds or more before an inevitable late flag, with the expectation that players throw their bodies on the line even though the ball is effectively dead.

What’s more, the handball law change has completely butchered the game. The law was altered simply so that it would be easier for VAR to draw a line between offences, and anyone who tries to claim otherwise is having you on.

There was nothing wrong with the previous edict stating that offences had to be considered deliberate – or at least that there was plenty of opportunity to react – in order to be penalised, whereas now defenders and strikers alike are being punished simply for having arms rather than for trying to use them against the spirit of the game. 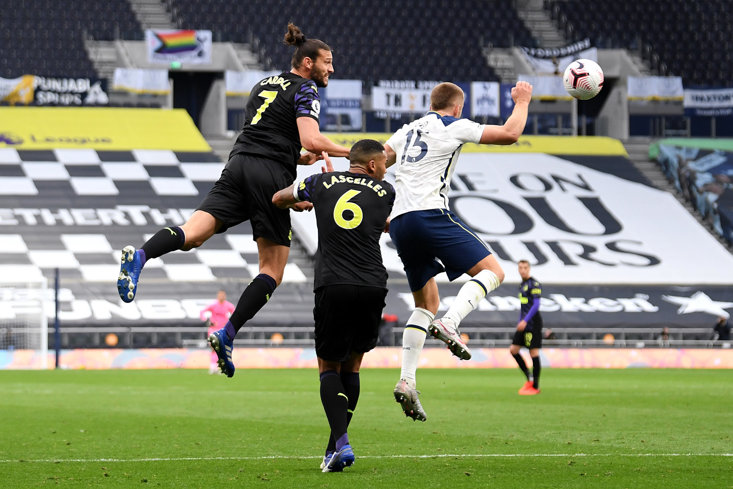 Dier being struck on the arm without looking is not an offence in any imaginable form except under this current law, and were it not for VAR that law would not exist. And yet still there are inconsistencies, as Matty Cash’s recent let-off against Southampton proved when a ball deflected off his thigh and onto his arm. While that also would have been harsh to an extent, at least he could see the ball.

Managers across the land have been left frustrated by VAR decisions, and just this week Bristol City boss Dean Holden was left ruing the decision to award a penalty and a red card after Alfie Mawson was sent off in the FA Cup against Sheffield United for throwing his body on the line and having the ball hit his arm. Stick in the absolute nonsense that was Tomas Soucek's red card against Fulham, and it's time to admit video officiating in football is not working.

Most of those in favour of VAR are now blindly following the official waffle come what may. Where prior to its introduction the party line was that it would rid the game of ‘clear and obvious’ errors, the most damning thing they will say of the system now is that it will ‘take time’ to get it working to an optimum level without destroying other parts of the game. But if there are significant issues still to be dealt with, why would you not take VAR off the table for now and bring it back after effective testing? In the meantime, it is killing many supporters’ enjoyment of the game.

And that’s what it comes down to. Football has always had question marks over refereeing, but it never stopped people falling in love with the sport. Fans came flocking to matches because of the instant thrill of a goal being scored, not because they wanted to see how close to perfect an officiating system could administer a set of laws. What's more exciting? Watching footballers wheel away in jubilant celebration or seeing Martin Atkinson stand in the centre circle with his finger to his ear? Referees were never so bad that this current mess is a preferred way forward, with the enjoyment being sucked out of the game.

There will always be inconsistencies in the way that people interpret video, so there will always be debates over video refereeing decisions. But it was always the same case with on-pitch referees, and at least back then we could celebrate goals immediately without fear of them being chalked off three minutes later.

The genie will never go back in the bottle though, and VAR is here to stay. And if other sports are anything to go by, it will be quite some time before refinements are made which make it a system which is fit for purpose.