What happens if at first you don’t succeed? Dust yourself off and try again.

It took Rod Laver years for his redemption.

The tennis player had embarrassed himself. A year into his career in 1957, following a win, the diminutive Australian tried to jump the net to commiserate and shake hands with his opponent. Instead, like so many amateurs don’t care to admit they have likely done a good handful of times in local courts across the globe, Laver’s leg became entangled, and the champion soon found himself flat on his face.

When he should have been revelling in victory and the adoration of others, his blushed red face was being unfortunately illuminated by his pristine white uniform.

It was almost as if God himself had tripped him up as if to say ‘not yet’. 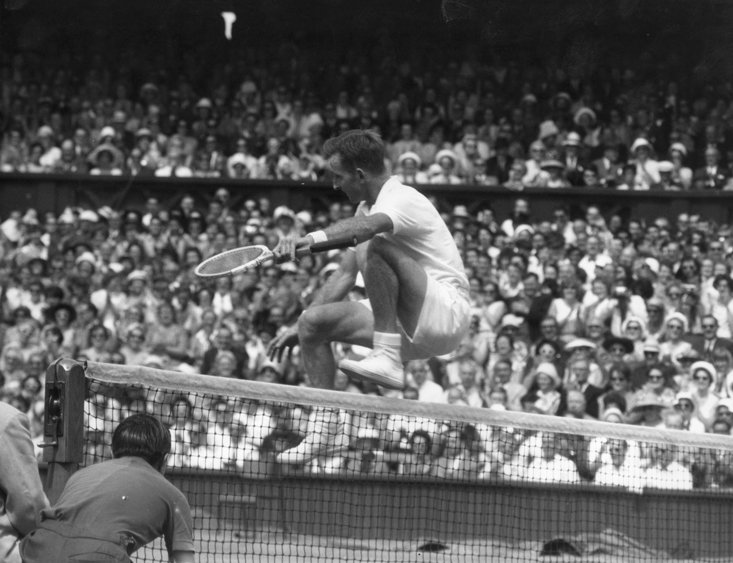 Laver would attempt to jump the net again in 1969, but by then he set a standard for the sport no other male player has ever accomplished since.

The 50s and 60s were chock full of Australian talent on the tennis circuit. There was Roy Emerson, John Newcombe, Neale Fraser, Ashley Cooper, Frank Sedgman - but 5ft, 8inch Rodney George Laver to this day stands tallest, his court successes contributing significantly to Australia becoming one of the three most historically powerful nations in tennis. He’s the man who has set the tone for his countrymen who followed him, from Lleyton Hewitt, Pats Rafter and Cash, and Nick Kyrgios.

Though there is a thick oak of exceptional sporting talent to hail from Down Under, along with Sir Don Bradman and Greg Norman, tennis titan Rod Laver belongs to be regarded as one of the deep roots, immovable from this Australian roster.

Between 1956 and 1977, he captured 20 major titles in singles, doubles, and mixed doubles, furthermore winning eleven of them in just 16 attempts, a record when he retired, and was also a part of five Davis Cup winning teams. Today, he is one of the few men alive to have had to prove himself on both the amateur and professional circuits,  the first player in tennis history to break the $1 million mark in prize money, and the only player to have both a stadium and tennis tournament named after him. 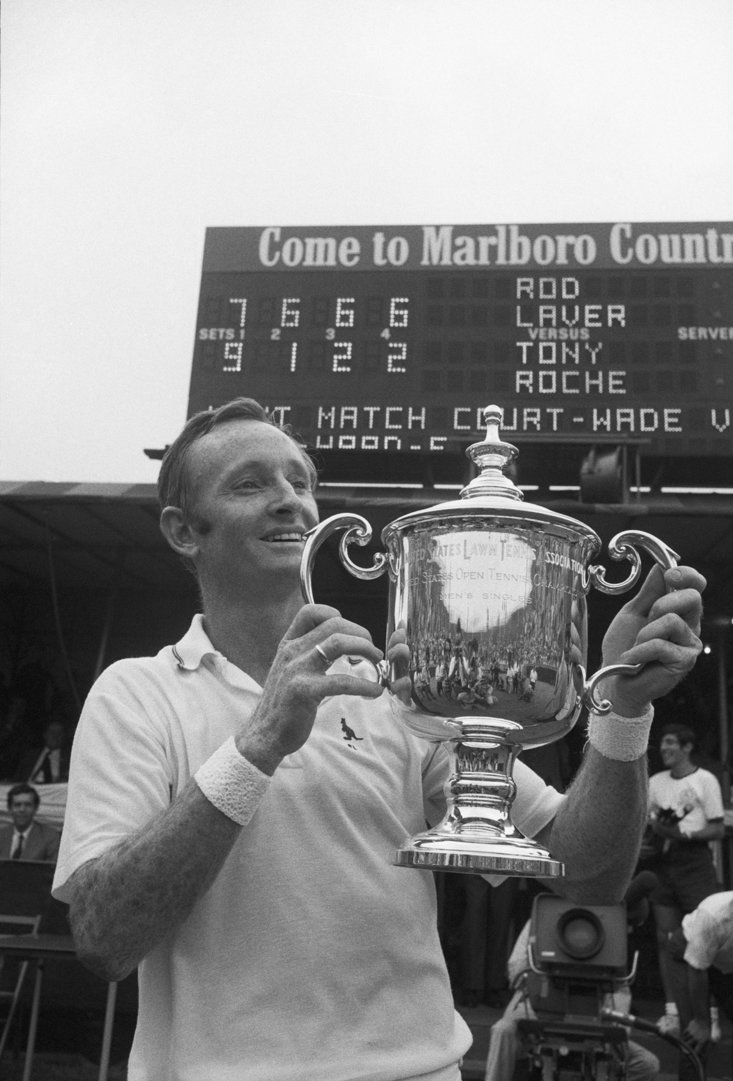 If you want to produce a tennis God, seemingly aim for your heir’s birth-date just slightly after the first week of August. Born on August 9, 1938, in 2018 Rod Laver was voted the second Greatest Men’s Player of the Open Era, with only the ethereal Roger Federer, the man born almost exactly 43 years to the day after, pipping him, though even the supreme Swiss himself has conceded Laver as the best in the history of the game.

Fundamentally, and with an achievement unlikely to ever be supplanted in the record books, Laver remains the only man to win the Grand Slam in a single calendar year twice, once in each of the amateur and in the Open Era. Though becoming renowned for his exceptional, almost peerless ability, his unexceptional appearance as well as a perceived lack of speed earned him the ironic moniker "Rocket" from coaching legend Harry Hopman. “He was the Rocket,” the late Hopman once said, “because he wasn’t.”

At 18, Hopman put Laver on the Davis Cup team and then at the 1960 Australian Championships he broke-out and made himself more visible in the public eye, when he came back from two sets down and saved a match point to beat his countryman Fraser 8-6 in the fifth set, and then followed it up by winning the first of two consecutive, and four overall, Wimbledon titles. 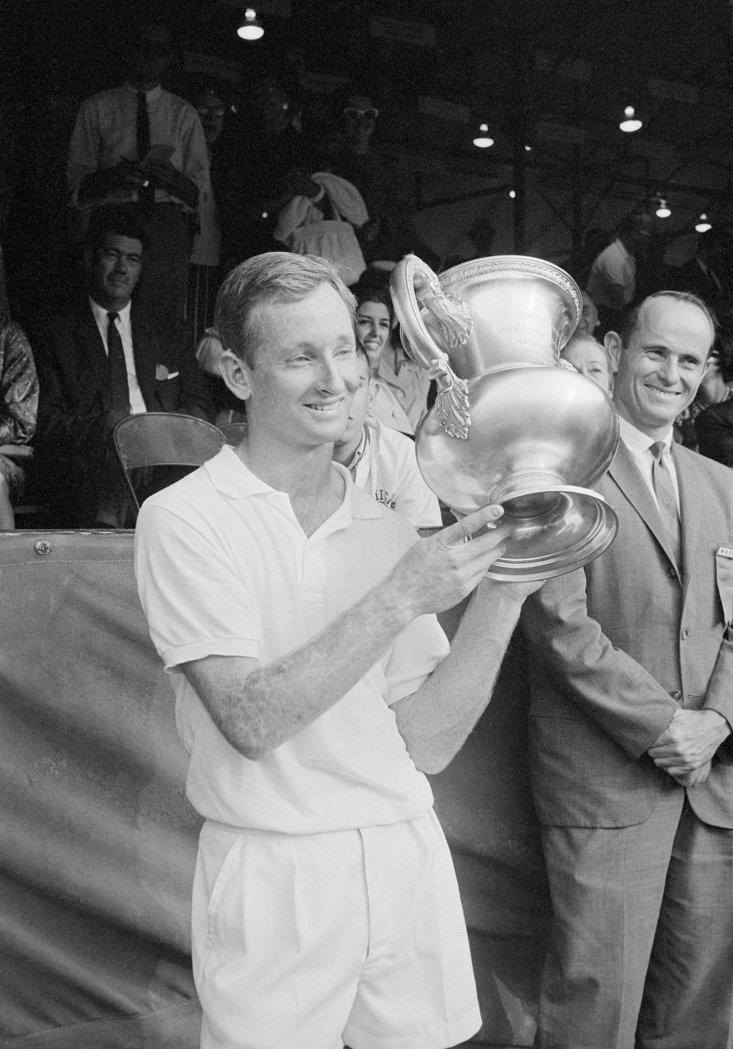 In 1962 he became the first man since Don Budge in 1938 to win the calendar-year Grand Slam, lifting trophies at the Australian, French, British and American Championships.

The Open era that is celebrated today was baptised by Laver.  In 1969, at age 31, at the height of Australian dominance, he beat three of his compatriot contemporaries in the four major finals to win his second calendar-year Grand Slam. Just once, let alone twice would be a feat that no one - not Federer nor Rafael Nadal - have come close to replicating. Novak Djokovic could achieve it with a US Open win in 2021, but that's once. Laver's double might not be touch.

“It’s a great thrill to be standing here having won this last championship,” he humbly declared after completing the final piece of the puzzle with victory over fellow Aussie Tony Roche at Forest Hill for the US Open, “All I can say that I am the luckiest fella in the stadium.” 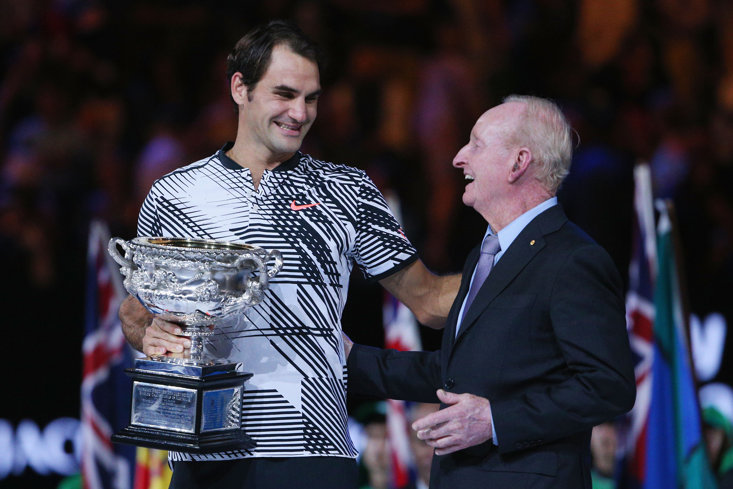 More importantly, he was lucky to now clear the net, hurdling across the court barrier enthusiastically, twelve years after landing flat on his face, to console and show sportsmanship to the defeated Roche. Though he had tried jumping the net again just four years after that comical accident, after beating American Chuck McKinley in the 1961 men's singles final at Wimbledon after a straight sets victory, this special occasion deemed it necessary.

More than half a century since his victory in New York to complete the hallowed set of four for the second time, no man has since made a Calendar Grand Slam.

Rod Laver himself would later reflect, simply, “It was just a thrill to be in this era.”