It was a quirk of fate that brought Wayne Rooney to Manchester United in 2004. Sir Alex Ferguson hadn’t wanted to sign him. Not yet, at least.

“If Newcastle hadn’t come in for him he wouldn’t be here, he’d probably still be at Everton,” explained the legendary manager. “Once we knew Everton were talking to another club we had to do something. We didn’t think he was available.”

Having monitored Rooney’s progress at Everton for four years, United had been planning to make an approach in 2005. But they knew that if Sir Bobby Robson and Newcastle United got their hands on England’s wonderkid, United’s hopes of ever seeing Rooney in red might be done for.

He had shown that summer that he had the temperament for anything. Already a Premier League superstar having blasted his name into the public consciousness with THAT winner for Everton against Arsenal, his four goals at Euro 2004 had proven him to be an international legend in the making too.

The foot injury he’d picked up against Portugal in the European Championship quarter-final wasn’t about to stop the suitors from circling, and United were happy to fork out £27 million for the 18-year-old on that August deadline day regardless of how long they would have to wait for him to make his debut.

As it turned out, it would be a four-week delay until Rooney donned the United shirt for the first time, striding confidently out between Ruud van Nistelrooy and Gary Neville for his bow at Old Trafford against Fenerbahce on 28 September. As the Champions League anthem filled the air of the Theatre of Dreams, the new number eight calmly nodded his head and chewed on his gum. There was a sense that he already fitted perfectly into the surroundings. Ninety minutes later, we were certain of it.

After Ruud van Nistelrooy dropped deep to bring the ball forward, Rooney held back on a run inside his marker before sprinting in behind to take the Dutchman’s pass on his left foot. With the pass and movement being equally perfect, Rooney met the ball at the ideal time and lashed home a left-footed strike to give himself the dream start to life at Manchester United.

Just 11 minutes later he was at it again. Ryan Giggs took Gabriel Heinze’s pass and laid the ball inside to Rooney. Seemingly without even checking, the youngster sensed a defender coming in to close him down so he instinctively let the ball run across him before taking a perfect touch and unleashing a stinging low drive from 25 yards which gave goalkeeper Rustu Recber no chance. 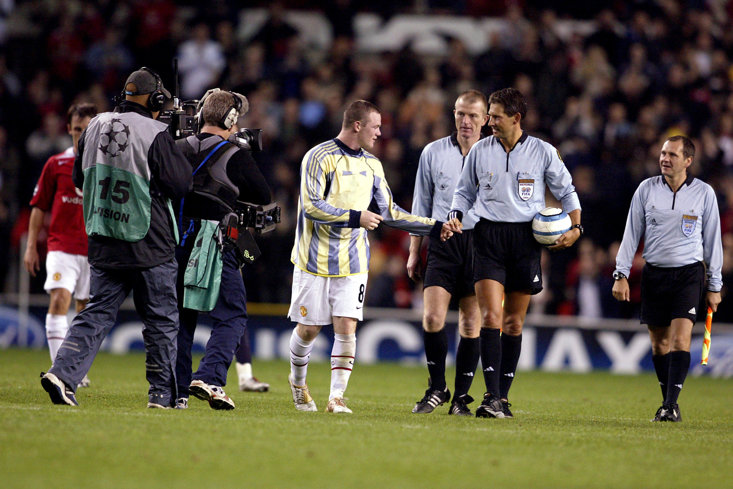 If there was a concern that Rooney wouldn’t have the legs in him to see out the full game, it wasn’t really in evidence from anyone of a United persuasion. He needed only nine minutes of the second half to complete his hat-trick anyway.

As United lined up a free-kick from just outside the area, Rooney ambled over. The script was written. Up he stepped, whipping a measured effort over the wall and beyond the desperate dive of Recber. It was 4-1 to United, but that was almost incidental. Rooney had three. On debut. In the Champions League. After three months out injured. At 18.

Even then, Ferguson didn’t feel the need to curtail the fun. When substitutions were made, it was Giggs who went off. Then Van Nistelrooy and Heinze. Rooney left the pitch only after United had completed a 6-2 rout, swapping shirts with Mehmet Aurelio at full-time, before throwing on his new Fenerbahce loot inside out as he petitioned referee Frank De Bleeckere for the match ball.

There would be 250 more to come, of course, but those first three goals of Rooney’s Manchester United career would never get lost in the shuffle. This was one of the most iconic debuts in English football history.