Granit Xhaka had become the symbol of Arsenal’s unavoidable toxicity this season. His very public foul-mouthed response to the Gunners fans who booed as he slowly left the field in the 2-2 draw against Crystal Palace was the flashpoint of a troubled spell which ended with the inevitable sacking of Unai Emery in November.

After Xhaka’s run-in with the fans, the Swiss midfielder was stripped of the captaincy and left out of five successive matches. Having returned for Emery’s final match in charge, the Europa League defeat to Eintracht Frankfurt, the general feeling around the club was that his days at the Emirates Stadium were numbered.

That opinion looked to be supported when Xhaka was absent from the matchday squad for Mikel Arteta’s first home game in charge against Chelsea. While illness was given as the official explanation, few bought that given all that the 27-year-old has faced in recent times.

The Swiss has long been a target for his own fans’ frustrations, but with the animosity having flared into full-blown, public rage over the past few months culminating in the Crystal Palace episode, Xhaka was reportedly keen on a move to Hertha Berlin as he sought to escape Arsenal.

The entire chapter presented an image of the club Arsenal have become over the past few years, with a clear need to heal not just the team on the pitch, but the overall atmosphere around the Emirates Stadium. 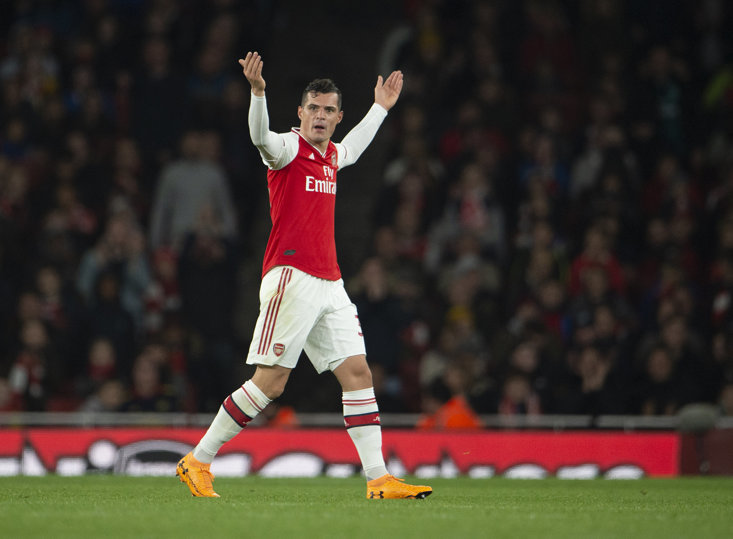 For Arteta’s part, he has attempted to deal with the rift with his inclusion of Xhaka in the 2-0 return-to-form win over Manchester United on New Year’s Day. He also delivered a clear statement regarding his intention to keep the former Borussia Moenchengladbach man in his post-match press conference.

"I had a conversation with him and I wanted to understand his feelings first, the reason why he was thinking here probably wasn’t the right place to continue his career," Arteta said of Xhaka.

"I gave him my opinion, my perspective, and I told him that I was ready to support him from the club perspective. I wanted his team-mates to get his back and help him to change his mind because we need him. I believe that if we were able to do that the fans would respond in a positive way.

“I’ve seen him act every day, how he trains, how he lives his profession and the quality of the player. He could be a really important player for the club.

"From my perspective I don’t want him to leave. I said to the club [to reject offers] and I told him ‘no’. But in life I cannot control what happens."

But is that the right move given how far down the line Xhaka and the Arsenal fans have gone? The truth is that Xhaka was never really good enough to take the north London side to where they want to be. Signed from Gladbach three-and-a-half years ago, Xhaka has been misused and misunderstood during his time in the Premier League, but the point of no return has been passed.

It’s best for all parties concerned that Xhaka leave Arsenal. At 27, the Swiss midfielder can still flourish at the top level should he find a club willing to harness him for what he is rather than malign him for what he isn’t. Meanwhile, the Gunners need midfielders who can control and dictate the pace of matches in the way Arteta will now demand. Despite an early willingness to attempt to heal wounds, Xhaka is not what the Spaniard needs in the longer term.

If Arsenal don’t learn from the sad story of Xhaka’s diminished relationship with the club then they stand little chance of moving forward, regardless of who now stands on the touchline. The culture around the Emirates Stadium, as much as the team on the pitch, is rotten and must be overhauled. Fans have a part to play in that. The sooner Xhaka goes, the sooner they can move on from the boo-boy culture.