On June 14, 1998, Michael Jordan won his final NBA Championship with the Bulls. Six months later, he departed the team altogether. That Game Six turned out to be their last game with them. Having already left them five years earlier for a brief baseball exodus, to paraphrase Donna Summer, this time Chicago knew it was real.

It was 22 years ago. 22 years since MJ last pulled on the blood of the Bulls, in yet another Championship-winning game; the last time to see the transcendent triptych - Jordan, Bulls, ring - for which he, and indeed they, will be eternally synonymous.

To put those years that have fluttered by since in perspective, if you traced the same time span back from that date, you’d be entering a world that still hadn’t heard of Star Wars, the seeds of Apple were only just sprouting, The Supremes were just about together, and Charlie Chaplin was still alive.

How else could Jordan consciously uncouple from the Bulls? The same way the first marriage ended in ‘93 of course, with the clinching of a third consecutive Championship title to reward the franchise with a ‘three-peat’, the sixth time in eight years they had been certifiably declared basketball’s best, those two lost years when His Airness had decided to swap hoops for homers.

When he returned to them in 1995, it wasn’t another encore, it was another Cash at Quentin, Queen at Live Aid. Though they eventually lost in the Eastern Conference semi-finals to the Orlando Magic in the immediate months of his return, three more titles with head coach Phil Jackson came in three successive seasons, taking the scalps of the Seattle SuperSonics and, back-to-back, Karl Malone’s Utah Jazz. 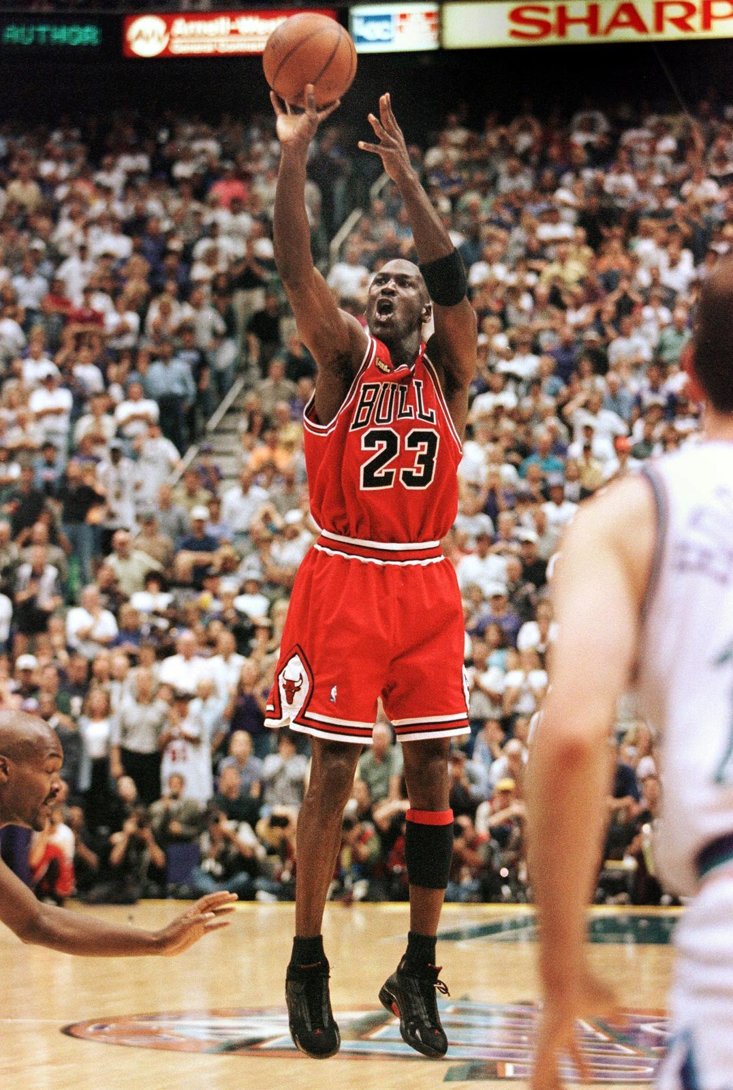 But when Jordan left the game in 1999 - disregarding the short spell with the Washington Wizards in the early 2000s - it wasn’t the rings that truly mattered, it was the overall impact on the sport, on Chicago, America, and indeed the world, that has endured.

In the ten years before his arrival, the Bulls had only made the postseason twice and their history had yet to be graced with a single Championship. Indeed, the last time a Windy City-based outfit had got to go to a Finals was in the last years of the Basketball Association of America (BAA) before its merger with the National Basketball League (NBL) to establish the National Basketball Association (NBA) we all know and love today. In 1947, the now defunct Stags were beaten 4-1 by the Philadelphia Warriors. Chicago didn’t know it at the time but there would now be a four-and-a-half decade wait for another appearance.

Between 1991 and 1998, Jordan, Jackson and the Bulls won an astonishing six NBA titles in eight years, something that hasn’t been replicated in the modern era. You have to go back all the way to Bill Russell, Red Auerbach and the Boston Celtics. In the two decades since his second departure, the closest the Bulls have got to another Championship is when they reached the Eastern Conference Finals in 2011 with MVP Derrick Rose and coach Tom Thibodeaueven, losing 4-1 to the Miami Heat.

As a 21-year-old NCAA champion All-America college basketball star, Jordan became the highest-paid player in Chicago Bulls history when he was the third draft pick in 1984. Within years, he was luring more than 400,000 new fans to Chicago Stadium each season. The venue’s replacement, the United Center, opened in 1994, is nicknamed ‘The House that Jordan Built’. In the early nineties, it was said that the Jordan brand was worth $1 billion to the region's economy. The first "three-peat" alone was said to generate $280 million for the local area. 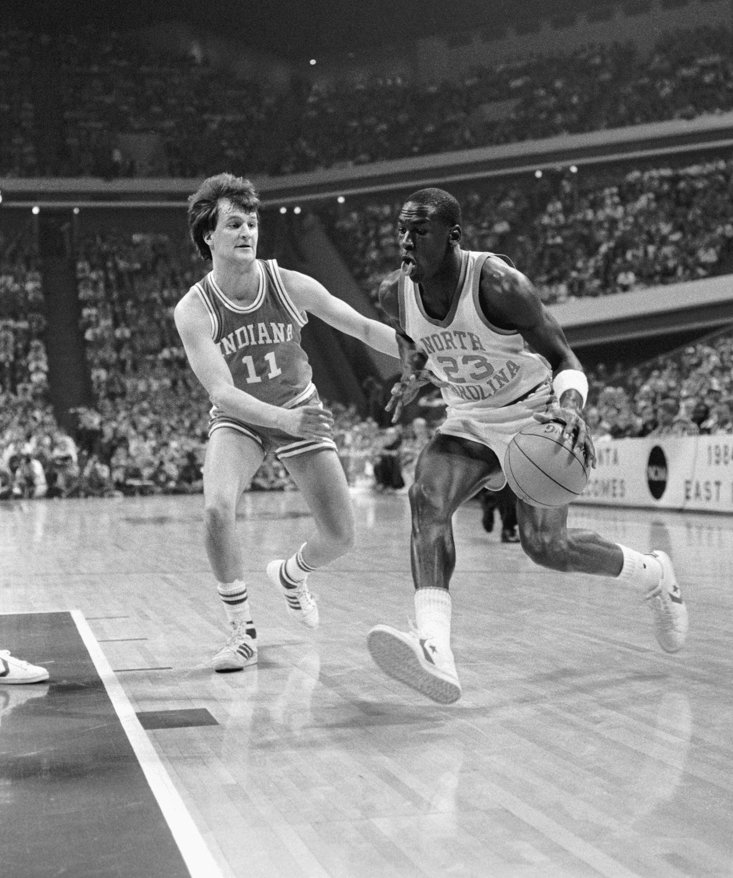 In 1984 the Bulls franchise was valued at $18.7 million. The next year, in which Jordan won Rookie of the Year, it was at $105 million. A Chicago Tribune article, written in the immediate aftermath of that triple Finals success in 1993,  estimated that the sheer power of Jordan directly on the franchise and the city meant the Bulls themselves were worth $1 billion.

Today it is worth $3 billion.

The article calculated that if Bulls fans had themselves raised the original $4.5 million of that first five-year contract handed to the young Jordan, those supporters would have been looking at a more than 22,000% return on their investment less than a decade later.

But Jordan was visible before he had even turned professional and, once he emerged into the NBA, he was literally followed every single step of the way and became a global phenomenon, a cultural juggernaut like none before or indeed after.

Imagine, just imagine, if there had been a career-curtailing college injury, which has derailed too many potential superstars to mention.

Jordan wore Converse kicks while playing for the Tar Heels at the University of North Carolina, wanted to go to Adidas upon going pro, but eventually signed a five-year deal with a base pay of $500,000 per year, with Nike (an amount that was triple any other NBA sneaker deal). In the mid-eighties, Nike was a relative minnow in the market - Adidas was 50% larger by revenue and Converse was the brand of choice for the most prominent NBA stars Magic Johnson, Larry Bird and Julius Erving.

The fact that Jordan’s first shoe with Nike was banned by the NBA because it didn’t meet the league’s colour standards only served to provide unprecedented exposure and get the machine whirring. The first Air Jordan sneaker hit stores the following year and racked up more than $100 million in sales in its first 12 months. 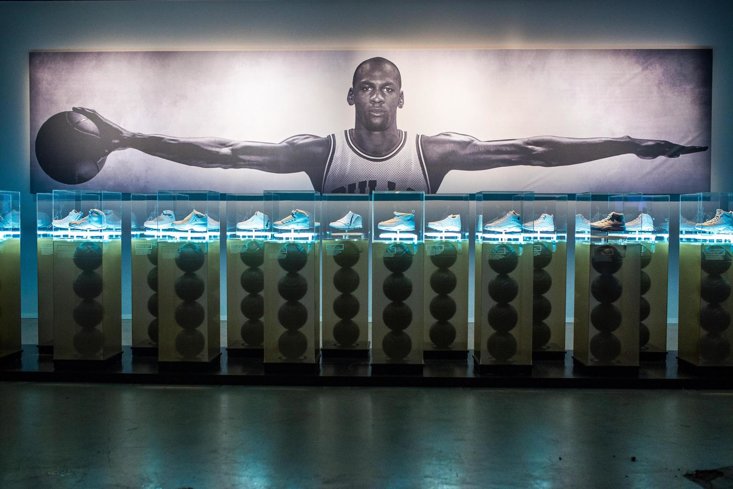 In the 1990s and into the new millennium, Kobe Bryant, LeBron James, Zion Williamson and Luka Doncic, are some of the galacticos who have been added to the unequalled Nike gazebo that had been erected by Jordan. In 2019, Forbes reported that Nike’s share of the performance basketball market, predominantly due to the Jordan Brand, was 86%. It had an even greater share of basketball lifestyle, with a frankly astounding 96%. 77% of NBA players wore Nike or Jordan shoes during the 2019-20 season, with the top nine models all made by Nike. Jordan himself earned an estimated $130 million from Nike as a result, four times as much as LeBron James, the highest-paid active player.

As of 2020, it has been estimated that the near four-decade partnership with Nike has earned Michael Jordan $1.3 billion.

Nike’s Jordan brand is worth more than $10 billion.

Jordan had scored 45 points in the entire match. The perfect player had literally crafted the perfect ending to the perfect story.

Michael Jordan was a freak, an anomaly, but fundamentally, irreversibly he changed what it was to be an athlete, completely blurring the lines between sport and culture forever. There certainly have been heirs to His Airness, but the throne remains occupied.

And of course, arguably most importantly, had there been no MJ, we might be talking about Shaquille O’Neal to have been the one Bugs Bunny sucked into that golf hole.