The number 23 shirt was primed and ready. The move that would see goalkeeper Richard Wright join Arsenal was all set to be announced and the club photographer had already informed the newspaper journalists that if they were interested, they should gather at the club’s training ground, London Colney, for an unveiling.

The reaction was muted, to say the least. An empty room with about seven journalists were present to see the Ipswich Town goalkeeper, who would be second choice at the club, talk to the press. There was an audible gasp among those present as manager Arsene Wenger walked out, with co-owner David Dein and a new signing.

But this wasn’t Richard Wright. This was Sol Campbell. Tottenham Hotspur’s Sol Campbell. This was, and still is, the most controversial Premier League transfer of all time and there is no close second. What Dein had managed to pull off was a secretive heist of their rivals’ figurehead, a player who had spent 13 years at White Hart Line since joining as a youth player.

It took secret meetings late at night, hushed tones and some rapid paperwork to make sure this one came off without even the faintest of hints to the press that this may be happening. In the modern world of social media and Fabrizio Romano’s relentless ‘here we go’ - this sort of transfer is unlikely to ever happen again, but twenty years ago, anything was possible.

What Campbell represented for both halves of north London was something drastically different. For Spurs, he was their talismanic captain, a no-nonsense defender who had risen through the ranks of their club to become one of the top defenders in the league. It was a hugely significant moment for the landscape of this rivalry that he decided, when out of contract at White Hart Lane, to sign behind their back for Arsene Wenger’s Gunners.

He was sick of not winning things and confident that a player of his quality should be competing at the top of the division. Spurs had finished ten places behind their rivals in his final season at the club and Campbell wasn’t about to watch the rest of his career evaporate without any significant silverware. Arsenal were the perfect option for him, but not for the fans. 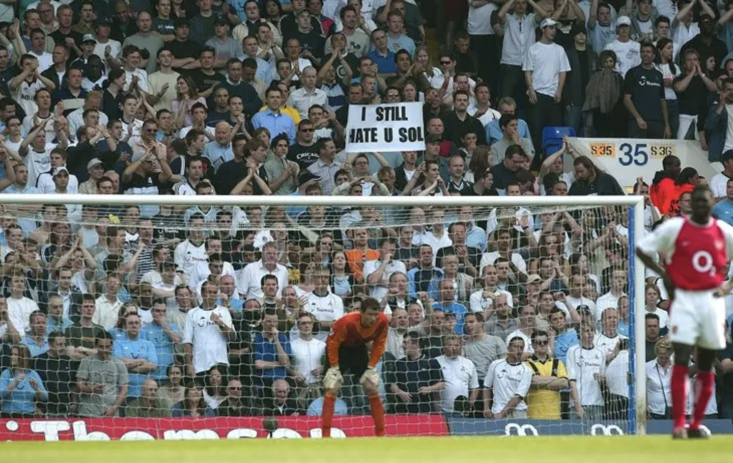 Tottenham’s loyal supporters were adamant that Arsenal were a club on the decline as Manchester United had pipped them to the title for three years on the trot. In the epic battle between these two giants, Sir Alex Ferguson had gained the upper hand and Wenger needed to react. He did so in emphatic fashion and went out to make a statement signing that proved his club wasn’t falling short.

It worked a treat. Campbell and Wenger would together win two of the next three Premier League titles and the defender was a key part of one of the greatest teams in history, the Invincibles. He won the league at White Hart Lane in the red of Arsenal, a moment in time that will not be forgotten by either set of fans.

His first return to his old stomping ground provided perhaps the most hostile atmosphere the Premier League has ever seen. Spurs fans had balloons printed that read Judas, signs printed that carried the traitors name and he was horrendously abused every single time he touched the ball. Gus Poyet scored a late equaliser as the game ended in a 1-1 draw, but the game will only be remembered for the treatment Campbell received.

Despite the abuse, the defender turned manager has never regretted his decision. When asked why he left Spurs for Arsenal he simply replied: "I wanted to win things,” and win things he certainly did. His first spell with Wenger yielded two Premier League titles, three FA Cups, one Community Shield and a Champions League runners-up medal. In that same time frame Tottenham won absolutely nothing.

Campbell was a huge hit at Arsenal, loved even more due to the fact he had turned his back on Spurs. There’s no doubt that this is the most controversial English transfer since 1992, and only added to a rich tapestry that makes up this football rivalry which resumes this weekend. But spare a thought for Richard Wright, who the press would see as he joined the club for £2m that summer. He left the club after just one season and his greatest Arsenal story is one he wasn’t even present for.