Football
Features
After another raft of controversies, we ask where VAR is going wrong
Elliott Bretland
11:56, 23 Oct 2019

A quarter of the way into the Premier League season, VAR continues to dominate the headlines.

Last weekend alone there was debate at Leicester v Burnley, confusion in the stands as Tottenham drew with Watford, and multiple controversies as fierce rivals Manchester United and Liverpool battled it out at Old Trafford. Inconsistencies continue and conjecture rumbles on.

So, where does the Premier League go from here?

The Sportsman got the verdicts of a former manager, ex-referee and a fan on whether they believe VAR is working.

It isn’t working and I’m disappointed as I’ve always supported the use of technology. They are passing on the responsibility of decisions directly to VAR. Another massive weakness is they are not using the pitchside monitors.

The major shortfall is they are advocating responsibility of the major decisions to the guy in the VAR room. That guy, on many occasions, is a Premier League advising colleague.

It’s like ‘Do I want to tell the guy at Old Trafford that he’s got to rule that goal out as there was a foul in the build-up?’ And therein lies another problem.

This isn’t arrogance, it’s confidence, but as referees we believe every decision we make is accurate. You’re out there, confident as hell and someone is whispering in  your ear: ‘Look mate, I think you’ve got it wrong.’ That can have a negative effect.

It seems the referees are happy to do their own thing and say: ‘Well actually, it’s not me that’s at fault, it’s VAR.’ I think there’s a potential blame game going on. They’re mechanical, no personality.

They’re happy to act like sheep. When I was the boss I’d sit in a room with Howard Webb, Mark Clattenburg, Paul Durkin, Mike Dean… they are not shrinking violets. They would tell you straight: ‘This is not right.’

I don’t think our referees, apart from Michael Oliver and Anthony Taylor, are as fit as in the past - standards have dropped, which leads to errors. We’re looking for VAR to be a prop to help the referee when he is caught out.

Somebody needs to sit down and re-examine how they’re operating. When a Premier League referee is put in a comfortable seat in a warm room and doesn’t have to run, can we be certain that he’s got the same levels of awareness and anticipation to apply the law and not rush? The guy now switches the television off and goes home - he’s not accountable. 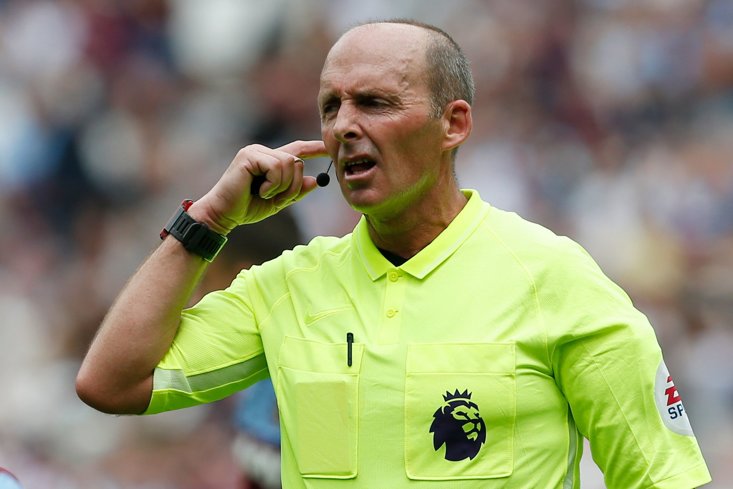 I’ve taken referees off the list. They weren’t bad, but they were not in form. It’s no different to a manager who says: ‘You’re not picked at the weekend because you’re not putting the ball in the net.’

The biggest change needed is the guy at the top. Ultimately, the boss carries the can. Mike Riley, he’s allowing the standards of officiating to drop - not my words but people in the street, supporters and former colleagues.

I’ve been watching the Rugby World Cup and sit in awe. Nigel Owens and Wayne Barnes, it’s the respect they earn and they’re both brilliant communicators. Our guys are capable of that.

I watched Mike Dean referee Sheffield United v Arsenal - he had a terrific match because he’s his own man. He deals with the controllables, has his own style and delivers. It can be done.

You’ve got Michael Oliver, reputedly our number one, and what did he do at the weekend? He did two games of VAR. I think he is terrific. Don’t spoil him, let him do his own thing, but keep him out every week! He’s our number nine that’s putting the ball in the back of the net, he’s our Harry Kane. Just get him in, don’t have him sitting in a room looking at a TV screen.

It’s like any new technology, this season was always going to be a testing bed for it.

I think the fact that there is no audience participation is a major oversight by the Premier League. VAR could be a tool for more fan excitement, instead it detracts from the game. They really need to up the ante in how they’re going to introduce fan participation.

The Premier League is the biggest-funded sporting organisation in the world, they should be able to make this something special.

The people in charge need to make it accessible and understandable. I think the fans at the stadium are in the dark, they’re not hearing what the referee’s talking to the VAR team about. The TV audience has more participation, seeing the replays.

The one drawback to that is that Manchester United and Liverpool do not have screens, which should be a major requirement for any Premier League side. How they’ve gone this long without screens, clubs of their size, I don’t understand.

It’s fantastic in rugby, the players see the screen and can’t really argue. Yet footballers are arguing because they can't see what’s going on.

We need to look at rewriting the rules to make it plain to everybody. When you see a toe nail making an offside decision, that’s ridiculous.

There’s got to be clear distance between any part of the body, that would be black and white. It would err on the side of the forward and probably generate more goals.

Everyone is confused. If it’s simple, everybody understands - that’s the problem, they’re making it complicated.

You’ve got to remember there was a massive clamour to get the decision right. Obviously the goal-line technology has been a massive boost - it’s a simple thing and nobody will argue with that - we see it and it’s right.

VAR is in its infancy and covers a wider range than a ball over a line or not. We need to give it time and learn rapidly.

It’s new to everybody. Referees have gone through their career without this technology being used and they’re having to deal with this on top of everything else. 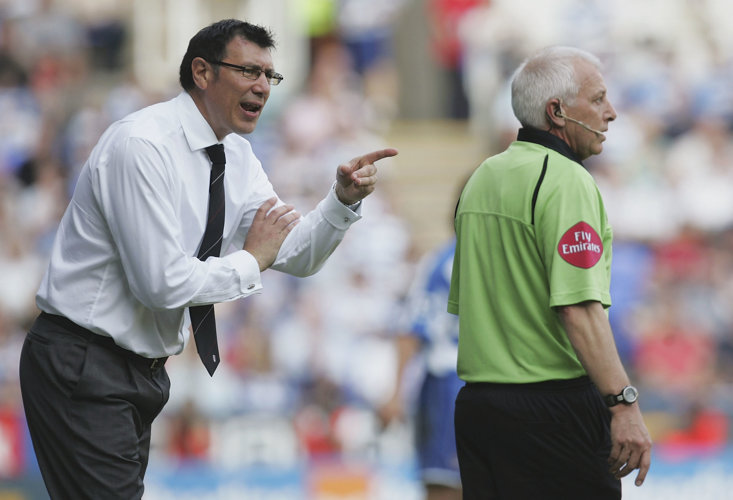 Overruling the referee is something they need to perhaps get a grasp of. Nobody wants to do it to their mates - they’re all mates the referees doing VAR, so there is a problem with that to a certain extent. They don’t want to do it in case later on there’s a similar situation. There’s a lot of human elements involved.

When I was manager of Fulham in 2007, we were allowed monitors in the dugout but they didn’t have monitors for the referee.

David Healy scored a goal in a scramble and we had the camera angle of the ball being over the line by about two feet. It wasn’t given. The fourth official couldn’t turn around to the dugout as they weren’t allowed to.

The following season, they took monitors out. The irony isn’t lost on managers.

Managers cope, that’s what we do. We’ll whinge when we get the chance but at the end of the day, we move on and do the best we can. Managers will get used to it. We’re a hardy breed and we’ll survive.

While the video system has cleared up doubt to a certain degree, there is still a huge grey area among decisions.

There is absolutely no doubt that VAR has killed the atmosphere at stadiums. The ecstasy of celebrating a goal has been replaced by caution among supporters who are reluctant to get carried away until there is certainty of the goal being awarded.

There is a place for VAR in the game but it has a long way to go before it can be considered to be a valuable addition. The constant interruptions are proving to be too long and are affecting the flow of the game.

It is absolutely staggering that referees have not been using the pitch-side monitors to assist with their decision-making so far this season.

Mike Riley needs to start directing his officials to use the pitch-side monitors and make decisions for themselves rather than relying on those who are at Stockley Park. 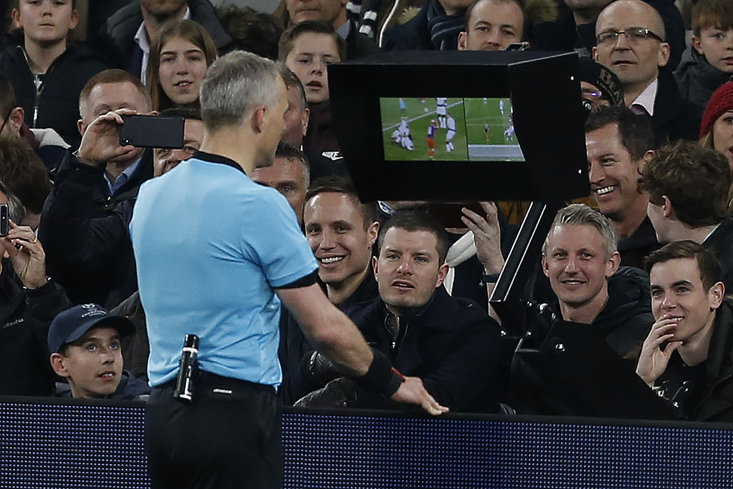 The time it takes for a goal to be reviewed and subsequently awarded is met with a light-hearted cheer, rather than the ‘limbs and scenes’ we love to see in the stands.

The passion is being sucked out of the game and changes need to be made, fast.

Watford can feel hard done by not to have been awarded a penalty, had they been successful in the VAR decision at 2-0, the game could have been beyond Spurs.

Looking at it from a Spurs perspective, we have been on the receiving end of decisions too. The whole system is flawed, with no consistency applied from match to match.