In order to get on his good side, we’d first like to wish the gung-ho German goalkeeping great Oliver Kahn a very, very happy birthday, as he prepares to blow out 52 kahn-dles.

It’s been 13 quick years since professional football last got to see Kahn raging between the sticks, the superlative shot-stopper who’d readily attack both opposition players and teammates when he deemed necessary like an incensed Leonidas, unafraid to use his limbs in manners usually unbefitting a player of his position. It wasn’t uncommon to see Kahn ‘get up in the grill’ or provide a truly Bavarian bellow in the face of a hapless someone - ‘friend’ or enemy - who happened to be unfortunate enough to be the target of his ire.

Oliver Kahn was born in Karlsruhe, Germany, on 15 June 1969, of German and Latvian heritage (his father, Rolf, was born in Liepāja, Latvia, in 1943). At the age of six, Kahn began playing for his local side Karlsruher SC, a team that both his father and older brother also played for professionally. He made his Bundesliga debut in a 4-0 defeat at Köln in November 1987, but in seven subsequent years with Karlsruher, Khan made 128 Bundesliga appearances and reached the semi-finals of the UEFA Cup. He had earned himself a move to Bayern München in 1994 where he remained for the remainder of his career and achieved almost incomparable success.

A thrice-crowned World Goalkeeper of the Year, Kahn won the Golden Ball at the 2002 World Cup as the man deemed ‘Best Player’ of the tournament, the first - and so far only - time the accolade has been awarded to a goalkeeper, having captained Germany to the final. 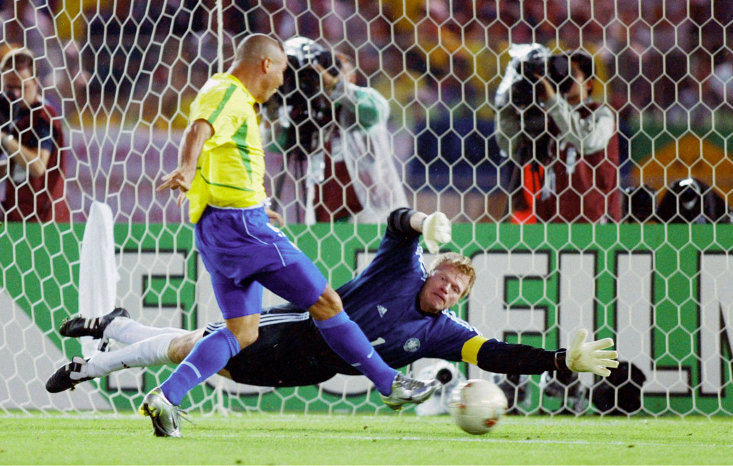 Kahn at the 2002 World Cup, joint-hosted by Japan and South Korea

Domestically, he twice claimed the record for longest period without conceding a goal in the Bundesliga, the first across a mammoth 736 minutes of action. It was a record that stood for three years before he himself bettered it, upon wracking up 801 minutes without seeing a ball go past him in 2002/03.

In a total of 557 Bundesliga appearances (429 of them for Bayern Munich), he managed to keep 205 clean sheets, or about one every 2.7 games across 21 years of playing. He lifted the Meisterschale as Bundesliga champion eight times, one behind record-holder Franck Ribéry who managed nine, also with the Bavarians, between 2008 and 2019. Kahn also claimed six DFB Pokals and after retiring in 2008 (on the back of another Bundesliga triumph) Kahn was offered a job as sporting director at Schalke 04 in 2009.

However, instead he opted to put his brains instead of his brawn to the test, gaining a coaching license in 2010 and a Master of Business Administration degree in 2012. He has supported various projects, such as the Munich street-football league 'Bunt kickt gut' and the Justin Rockola Association which aims to protect young people from various vices, and, somewhat eye-brow raisingly when one remembers his on-field persona, violence.

Quite the impressive CV. One thing that was ultimately missing from that resume was a goal.

That wasn’t, however, from lack of trying.

The 2000/2001 season will be remembered as one of Bayern Munich’s most successful, and no doubt formative to their pre-eminence in Germany in their first fifth of the 21st Century. Coached by Ottmar Hitzfeld, the campaign saw Bayern win a historic double, achieving a first Champions League title - their first European Cup victory for more than a quarter of a century and eradicating a portion of the heartbreak suffered against Manchester United in Barcelona two years earlier -  to go alongside a third consecutive Bundesliga title. 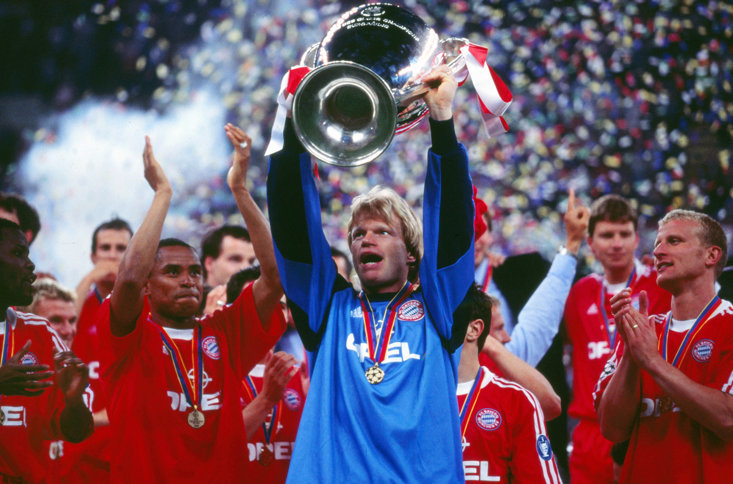 However, due to the certain antics of Kahn, it wasn’t the only reason it proved to be memorable.

March 3, 2001, the Ostseestadion, 90minutes on the clock. Bayern found themselves trailing 3-2 to Hansa Rostock. After a 1-0 win at Munich Olympic Stadium earlier on in the season, Hansa were on the verge of completing a league double. More importantly, Munich were locked in a tight championship tug-of-war with Schalke.

Bayern were awarded a corner in the dying minutes of the game, a last chance to get something from the game. The blonde mane of Kahn appeared and the goalkeeper launched himself into the air. His lack of intention to hit it with any of his body apart from his hands was immediately clear, arms outstretched as a perfect punch was instigated, the ball sailed past his opposite number Martin Pieckenhagen and struck the back of the net

3-3? Shared points? Another point in the title race? Unfortunately not.

Dr. Marcus Merk brandished the red and Oliver Kahn was sent for an early shower, with a distinct lack of protest from the man himself. 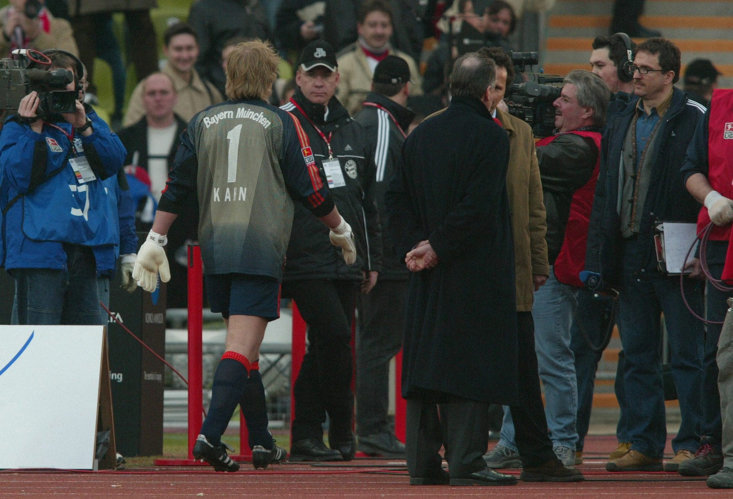 Ultimately, Kahn and Bayern had the last laugh (one imagines a deep Deutsch guffaw), by retaining the league title for the third year, by just a single point ahead of Schalke, and Kahn was anointed Best European Goalkeeper and the UEFA Club Football Awards Best Goalkeeper for the third of four straight years.

Oh, and what was Kahn’s thought on his goal that never was?

“I thought goalkeepers are allowed to use hands in the penalty box...” he said.