Brighton secured three points against Tottenham Hotspur and bagged a clean sheet along the way. Reigning champions Manchester City were condemned to their second defeat of the season, Manchester United collapsed at St. James’ Park and Everton have been plunged into the relegation zone.

An earthquake struck in Gameweek 8, full of shocks and surprises.

Liverpool just about secured victory against Leicester to go eight points clear at the top of the Premier League table.

However, it was a low-scoring weekend for many managers with Sadio Mané the only big hitter in FPL to record any attacking returns thanks to a goal and an assist.

Brighton’s Aaron Connolly hit the headlines after marking his first Premier League start with his first top-flight goals, collecting the Man of the Match award for good measure against Spurs.

The 19-year-old became the first Irish teenager to score a Premier League brace since Robbie Keane for Coventry in August 1999.

At £4.5m, Connolly appears a better option than the Red Devils’ Mason Greenwood, with both strikers in a similar price bracket.

The Republic of Ireland under-21 international participated for 79 minutes of the game against Mauricio Pochettino’s side, whereas Greenwood has only played 87 minutes of Premier League football all season and has so far failed to record any attacking returns.

If the Seagulls’ forward can reproduce the form he demonstrated against Spurs then it’s a no-brainer.

If you have a free transfer to deploy coming out of international break then it could be worth considering, especially looking at Brighton’s upcoming fixtures, with their next three opponents displaying a Fixture Difficulty Rating of 2. 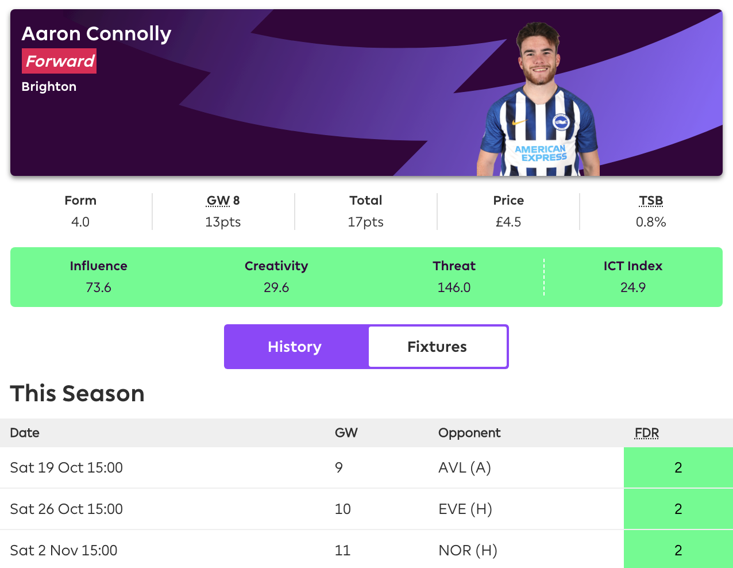 While Teemu Pukki drew a blank for a third consecutive week, Aston Villa’s Wesley Moraes made a case for himself after scoring twice and providing an assist against Norwich.

Since scoring his first Premier League goal against Everton in Gameweek 3, Wesley has now tallied four goals and an assist in six appearances.

At £6.0m, the Brazilian youngster would save you a valuable £1.1m over Pukki.

The Canaries forward has already dropped £0.1m and you will want to be quick to offload the Finnish international before he decreases again, especially considering he is already the most sold player this round.

Despite losing to league leaders Liverpool, Leicester City held out until the 95th minute before conceding a penalty converted by James Milner

On a positive note, James Maddison stepped up to deliver his second goal of the season and has now compiled 17 points in his last two games.

Since joining the Foxes, Brendan Rodgers has been a sensation. The 2015/16 champions have already faced four of the ‘Top Six’ this season and sit in a comfortable fourth place in the table with a nice run of fixtures coming up.

Over the next nine gameweeks, Leicester face eight teams who carry a Fixture Difficulty Ranking of 2 and, based on Maddison’s current form, the Englishman looks a great hit at £7.1m.