In South America, away games are a daunting prospect. Long journeys, hostile crowds, bad pitches and inclement weather can all take their toll on the visiting side. Yet one away-day factor is still more feared and more damaging than any other: altitude.

On Tuesday, Lionel Messi and his Argentina teammates managed to pick up a 2-1 in La Paz against Bolivia. Those not cognizant of the details might think it a less than noteworthy result, but throw in the fact that the stadium is 3,640m above sea level, and the magnitude of the challenge starts to hit home.

In 2009, when Diego Maradona was their manager, Argentina lost 6-1 away in La Paz. In 2013, Messi was seen throwing up on the pitch in the same city. “It’s terrible playing here,” he said after the final whistle.

Whilst La Paz is the highest away trip on the World Cup qualifying circuit, the one that all other nations dread, things can be even worse for club teams in the Copa Libertadores, the continent’s Champions League. In February this year, São Paulo had to travel to Andean town Juliaca to take on Peruvian champions Binacional in a stadium that sits at 3,824m. The Brazilians started well, taking a 1-0 lead. But as the effects of altitude intensified in the second period, Binacional were able to turn the game.

Dr. Luis Fernando Barros, a São Paulo physiologist, explains a bit more why it is so difficult to play in such conditions, “People say, ‘There is less oxygen’. That’s not exactly the case. The partial pressure of oxygen is lower because the atmospheric pressure is lower. So, the amount of oxygen available ends up being smaller. Players are already working at the limit of their efforts in a game. If you reduce the support oxygen provides to the muscles – your fuel – by 30%, it is harmful to all your physiological functions.”

The main physical symptoms are lack of breath, reduced endurance and headaches. Then there are other effects that Barros refers to as “psycho-neuro-motor disturbances”. Decision making, he explains, “is certainly negatively affected. Although it is hard to quantify, it’s a big impact.” Some players are more affected than others and it is unpredictable who will suffer the most. Sometimes the same player can even have different reactions on different trips to the same place.

A 2007 study by Oxford University’s Patrick McSharry provided a numerical breakdown of the altitude effect. After analysing 1,460 football matches in 10 countries, McSharry concluded that, “Each additional 1000m of altitude difference increases the goal difference by about half of a goal. The probability of the home team winning for two teams from the same altitude is 0.537, whereas this rises to 0.825 for a home team with an altitude difference of 3,695 m (such as Bolivia v Brazil)”. 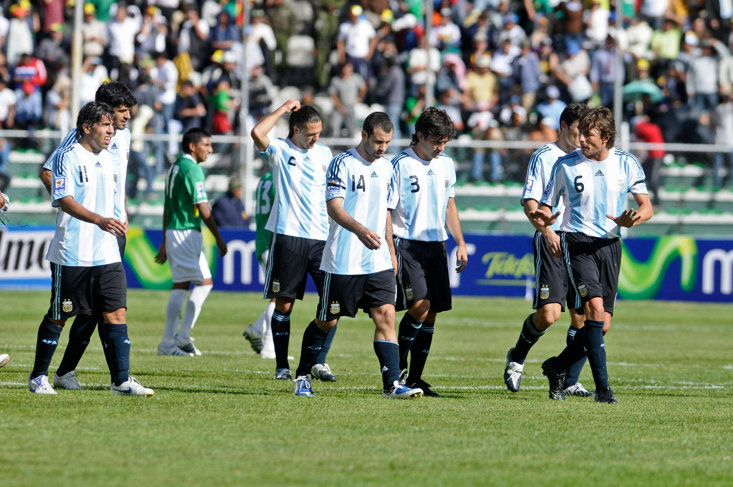 People who live at altitude have an advantage because their bodies respond to the conditions by producing more red blood cells. As a result, more oxygen is transported to their muscles and brains. But for someone who lives at sea level, it could take almost a month to adapt to the altitude of somewhere like Juliaca.

The best way to deal with the issue, apparently, is actually leaving things late. As Barros tells us, teams have taken to arriving in high-altitude destinations, “as close as possible to the kick-off time”. The reasoning is that, “The effects are cumulative and build up as time goes by. Six to eight hours after arrival, the body’s reactions are exacerbated. The closer you arrive to the time of kick-off, the lesser the effect will be.”

This plan is not without risk, as the Argentine club Atlético Tucumán found out in 2017. Their flight to Quito in Ecuador was delayed on the day of a game and they missed kick-off by almost an hour. For them not to lose by walkover, Atlético’s team bus had to be escorted to the Estadio Olímpico Atahualpa by police, rattling through the city’s streets at 100 miles per hour.

As well as spending as little time as possible in the rarefied atmosphere, additional measures must be taken. Firstly, a new meal plan must be devised as the digestive process is disrupted at altitude. Players eat small meals at regular intervals, with lots of carbs, which are easier to digest. Secondly, Barros says, “the athletes must hydrate well, because the relative humidity of the air is lower. You lose more fluids, so you have the added effect of dehydration.”

Barros raises an important question. “To what point are these games at altitude fair? I’ve been in situations where a player has got into the changing room in a really bad way, or even hasn’t been able to play. As a doctor, these situations worry me. We need to be sure that we’re not putting players’ health at risk.”

Fifa has considered this point and in 2007 even got as far as banning games from taking place more than 2,500m above sea level. But the political pressure from the countries that benefit from playing at altitude was great enough that they reversed the decision.

For the time being, trips to high-altitude venues are just another test football will continue to put its players through.