It’s almost here. After the biggest upset in years, we are rapidly approaching perhaps the most pivotal fight in the career of one of Britain's great heavyweights.

Anthony Joshua and Andy Ruiz Jr. get back in the ring on December 7th for another world heavyweight title fight in Diriyah, Saudi Arabia. But how did we get to this point? After all, the pair weren’t even meant to be fighting each other in the first place.

Joshua had a fight with Jarrell Miller all tied up for June this year, but just six weeks before the bout the American was refused a licence after failing a doping test.

With Joshua’s team scrambling around for a new opponent for the date at Madison Square Garden, forward stepped Ruiz, who had beaten Alexander Dimitrenko only a few weeks earlier.

The taller, leaner AJ was expected to make short work of the Mexican-American, but what developed was one of the greatest shocks in heavyweight history.

The hastily-arranged contest turned out to be a fight full of firsts.

In an incredible third round, Ruiz was knocked down for the first time in his career when Joshua caught him with a wicked combo of right uppercut and left jab. But the super-sub underdog immediately rose to his feet and sent the champ flying to the floor on two separate occasions before the bell rang on a momentous round of heavyweight boxing.

AJ never regained his composure after that though, and when Ruiz went for the kill in round seven, Joshua hit the floor twice more, leading the referee to stop the fight and crown Ruiz the first heavyweight champion of Mexican heritage in boxing history.

After the first defeat of Joshua’s professional career, promoter Eddie Hearn was quick to declare that he would be initiating the rematch clause in the fight contract.

“After meetings with AJ, [his trainer] Rob McCracken and the management team in New York, we have today triggered the contracted rematch clause with Andy Ruiz Jr,” said Hearn.

And Joshua has been talking up his chances of immediately regaining his belts.

“Look out for the end of the year, and what’s next,” said the 30-year-old. “It’s an upset, it’s unexpected. I was the favourite. One shot hit me on the top of the dome and rattled me a bit. I tried to stay in there a few more rounds but the better man won.

“I don’t underestimate anyone. He’s a decent puncher, a decent fighter. He was the better man. I’ll tidy up, brush off the cobwebs and go again.

And that has led us to here… In Diriyah on Saturday, December 7th the pair go at it again. AJ gets his chance for immediate redemption against the man who proved he is mortal. 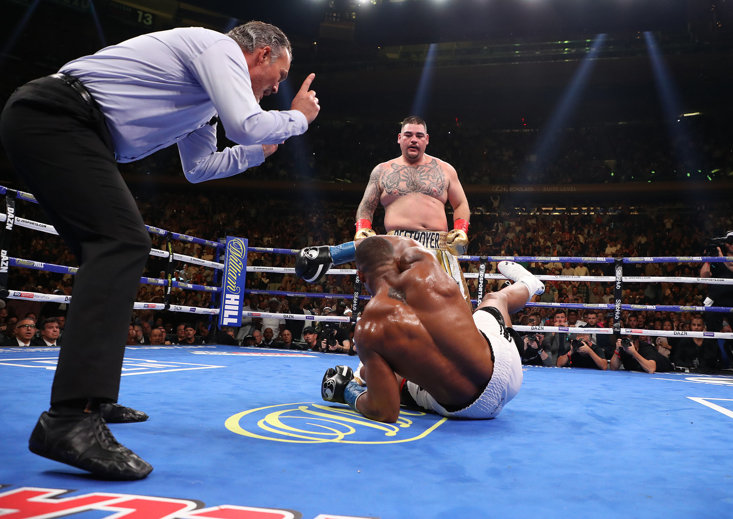