Hawaii is a lost paradise. Ted Deerhurst was drawn there as a dreamer. It was his Mecca, the ultimate challenge. There are big and fabulous waves all around the world but Hawaii was always the focus.

Ted needed to live there. And he ended up dying there.

He was Edward George William Omar Coventry, Britain’s first ever pro surfer and he was in many ways the surfing ideal. An outsider amongst outsiders, he never broke into the world top 100, but his passion for the sport, and this world, was unequal. His struggle wasn’t necessary, but it was one almost chosen. As the son of George Coventry, 11th Earl of Coventry, Ted had been styled Viscount Deerhurst since birth. As such, he acquired the nickname of "Lord Ted" in surfing circles. It was a background that was simultaneously privileged and a burden.

Ted tried to construct a life of his own, independent from his history, taking him away from the pomp and circumstance of the British aristocracy to the freedom-loving community in the islands in the middle of the Pacific, where he fought to make a name for himself in a society that embraces the bohème. But Ted wasn’t just attracted to surfing, he was also attractive to surfing: as the Lord on the Board, he was the eccentric on the circuit. 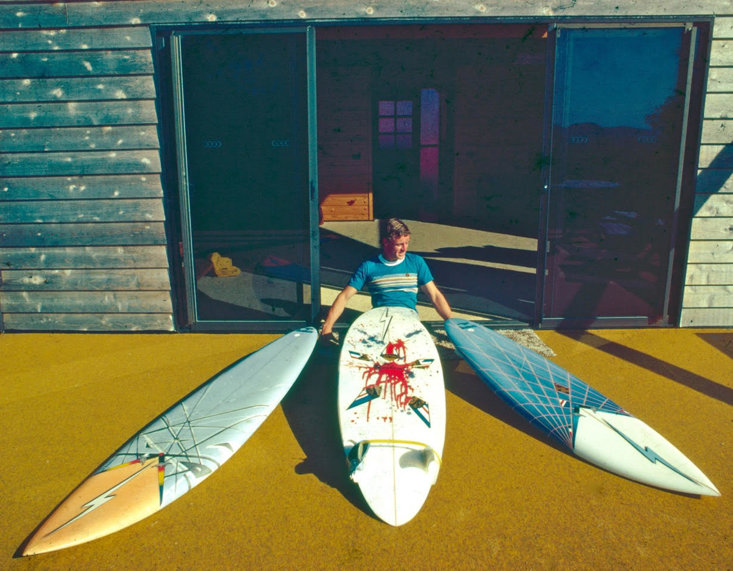 Celebrated journalist and academic Dr Andy Martin, the man who had the first ever surfing column in a major newspaper in the UK and personally wrote Ted’s obituary in 1997, has researched first-hand the life and death of his old friend, now published in his book ‘Surf, Sweat and Tears’. It is a journey that has taken Andy into the seedy underbelly of Hawaii, to uncover an almost quarter-century mystery that has existed since Ted’s death in Honolulu aged just 40.

“Surfers are themselves marginal. But Ted was marginal with respect to surfers,” Andy tells The Sportsman, “In some ways he was the most quintessential surfer you could ever imagine.”

Forgoing the support of the family that would have restricted his lifestyle, Ted pursued barrels and the big waves, by sleeping in a beaten-up old car, was pretty much broke, and paid the bills by taking odd jobs, making a living as a waiter, or pumping gas.

“He was completely on the run,” says Andy, “He had fallen out with his family, been veritably disowned. His dad even once tried to kidnap him back from Santa Monica when he was sixteen.” 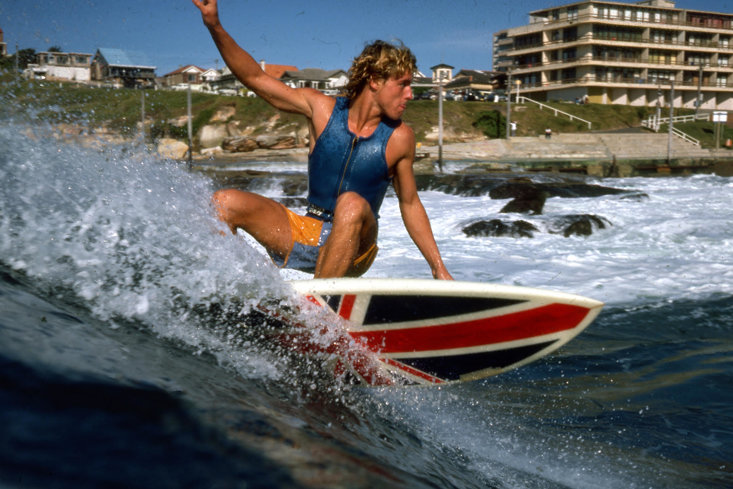 The high point of Ted’s surfing career was reaching the semi-finals of the Smirnoff at Big Sunset Beach in 1978. But even though he never hit the top 100 in the professional rankings, he was, in many ways, the most persistent and committed performer on the world circuit.

“He was definitely not a top 10 guy but he was probably a top 100 guy, and he was marked down through subjectivity,” Andy claims, “It was felt that the kid from Brazil needed more of a leg up that Viscount Deerhurst did, even though Ted was more or less as broke.

“When he hit that height he was very young and he was just starting out. It could have been the beginning of great things. But unfortunately it was his high point, one that for the next twenty years he would never reach again. He did surf a great wave off Padang-Padang in Bali, Indonesia. It was Ted’s perfect wave. 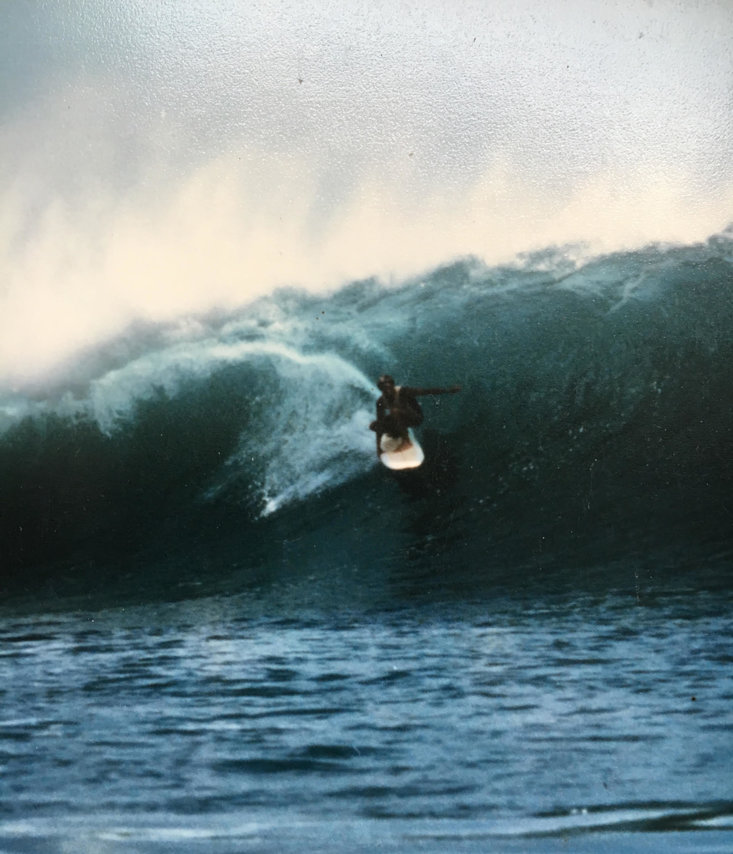 Ted became an adept of big-wave conditions and once described surfing a 20-foot wave at Waimea Bay as being like "jumping off a three-storey house - and then having the house chase you down the street". He lived at different times in Australia, California, and finally on the North Shore of Hawaii, where he eventually met his untimely demise in pursuit of that secondary desire: the perfect woman.

“I told him he was looking at a world of pain,” says Andy, “One night, I was in Cambridge, about 3am, and I got a phone call from Hawaii. It was Ted shouting: “I’ve found her!’”

Andy would meet her just once, this woman, Lola, an exotic dancer in a nightclub in Honolulu. Ted had met her in the same location and had fallen in love, right there, right then.

“The only time I did meet her she was completely naked,” Andy says, “However, there was a triangle. Ted, Lola. And there was her boyfriend Pitbull. Pitbull was a very bad man.”

On October 4, 1997, Lord Ted was found dead in the bathtub of his Hawaiian condo. He was just 40. Officially, the coroner reported heart failure brought on by an epileptic fit as the cause. Shortly before his death Ted had been visited by two suited security men on the North Shore. They had approached him with sickeningly unusual politeness. One smiled. One remained silent. But their message was clear - stay away from Lola if you value your life and your limbs. 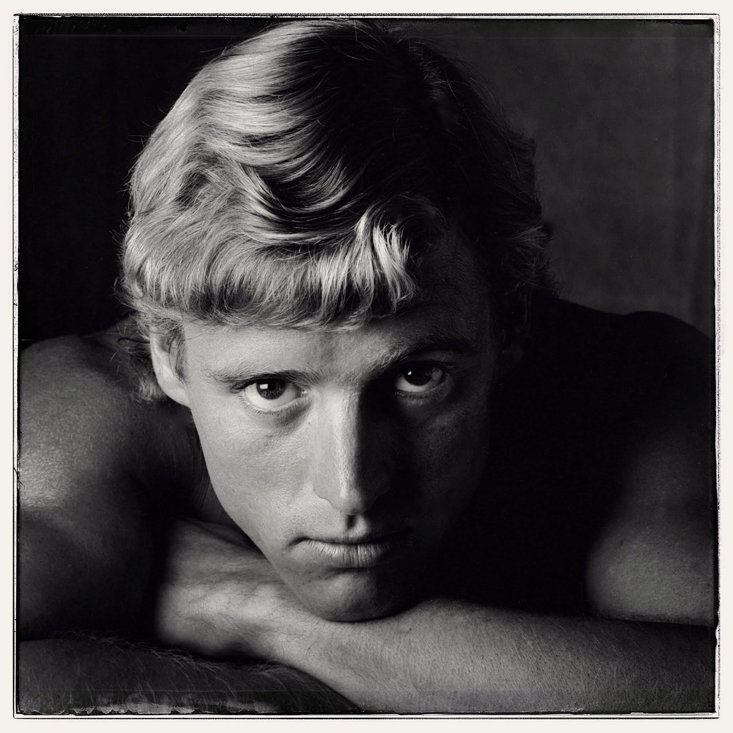 Soon after, Ted was found dead. He had never reached the record heights in surfing he had so desired, but instead carved out a wholly individual life and story that had defied his birthright. He had, as well, at least reconciled with his father before he died.

“He’s a weird one-off,” Andy proclaims, “There’s no story like it. But at the same time he was a universal kind of guy. Everyone has a bit of the dreamer and the loser in them. He's a modern Don Quixote, fighting against windmills, pursuing the journey, the quest. And that makes him a very sympathetic figure.”

So where should Lord Ted Deerhurst be placed in the pantheon of surfing greats? Where is his chapter in this ongoing exhilarating narrative of the most liberating sport?

“With Ted, in his mind he was a great surfer,” states Andy, “A legend, but the aspiring, would-be surfer. And that’s who I, and who we, can relate to.

“I feel that he deserves some kind of testament not to be forgotten.”