You would think, as a journalist, that performing an interview with a Formula One driver at the end of a race would be a relatively easy task. Just ask the catch all questions of “How was that for you?” and let the driver wax lyrical about their success or the injustices of a race.

However, sometimes it doesn’t go quite that smoothly, and as a journalist you have to think on your feet. As the F1 season careers towards its final four races I thought I would share some of those moments in the paddock when things definitely don’t go to plan.

This weekend Lance Stroll, the Canadian Racing Point driver had a tough run of it. He collided with Esteban Ocon’s Renault on the opening lap, had to come in and change his front wing, and then could only really battle around the back of the field, while his teammate nearly got a podium.

He also sent his mechanic flying as he entered the pit lane with cold tyres and overshot his pit box by a few inches. (He was a little bruised but fine after the race.) Not the ideal weekend. So, when he came to the media pen to be interviewed after the race by F1 reporter Lawrence Barretto, to say he was less than communicative would be an understatement.

In 23 seconds of TV gold (I say that with a full sense of sarcasm) Lawrence managed to ask him four questions which all were met with answers that lasted no more than two seconds: “I don’t know,” “Very frustrating,” “Cold brakes *****,” “No”. It was the sort of interview you dread because you have to have the reflexes of a coiled cobra. Usually you have a few moments to listen to the answer and decide what to ask next. Four one-word answers in a row is a nightmare and certainly keeps you on your toes. 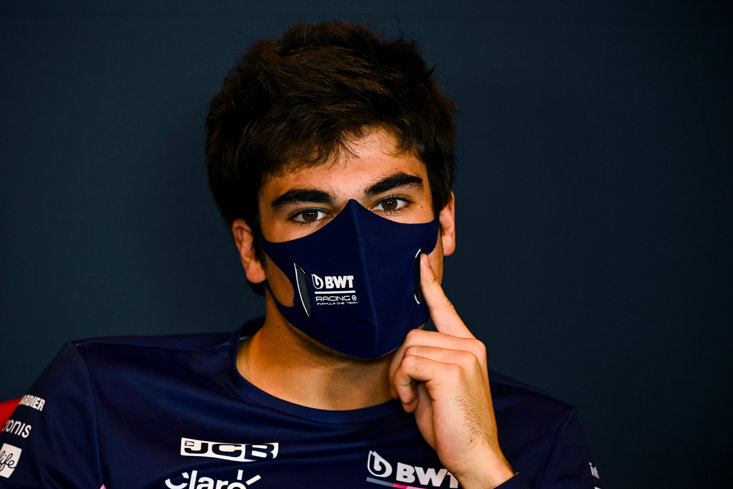 LANCE STROLL WAS IN A LESS THAN TALKATIVE MOOD ON SUNDAY

It got me thinking of some of the other interviews that I have done in the paddock which have been great hits or absolute misses.

I remember in Malaysia in 2013 when Fernando Alonso crashed out of the race after duelling with Sebastian Vettel. As a journalist in the paddock, as soon as a big name crashes out you hot foot it to their garage to wait for them to come out the back door so that you can interview them.

Obviously, the paddock is full of journalists from around the world so there about 70 people gathered around the back of the garage door waiting for Alonso to come out. Eventually there was movement behind the door, and the Spaniard approached. He was furious.

Less than pleased about crashing out, he slammed the door open, keeping his helmet on so that he didn’t have to talk to the press. However, in crashing through the exit, the door smashed into my mic hand and left me with blood dripping down my arm. It was only a small cut and I’m sure Fernando didn’t mean to injure anyone, but in the heat of the moment I have seen many an unpleasant incident, including a pregnant reporter being knocked off her feet in the melee of trying to get that all-important interview. It’s a pretty cut-throat environment at times.

My worst-ever interview was on the grid at Monaco when I mistook Chris Hemsworth for Liam Hemsworth – twice. Forgivable at the beginning of the interview when he kindly corrected me and said, “I think you’re thinking of my brother”. Not so easy to forgive when at the end of the interview when you try to dig yourself out of the hole by thanking him profusely and still call him Liam and not Chris…Oooops. 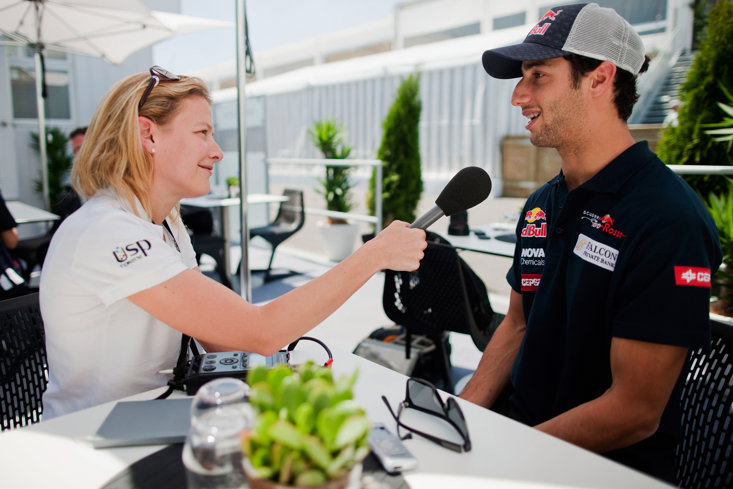 JENNIE GETS THE LOWDOWN FROM DANIEL RICCIARDO

On the flip side there have been many occasions when it’s gone better than expected. I had the good fortune to interview Lewis Hamilton just after he had won the world title in 2014. It was a very relaxed affair as we sat around a table in a small hospitality unit at the track in Sao Paulo, Brazil.

We spoke for a good 15 minutes (that much time with someone in F1 is quite rare) and chatted about success and failure and his new life with Mercedes, but then the conversation turned to when he was a child. It was a very different Lewis – far more vulnerable and real. He took me back to a time when the family were struggling for cash and his father was working several jobs each day to keep their dream of Lewis racing alive.

He spoke of Pot Noodles in the back of a van, and the times when the pair of them would spend hours tinkering with a second-hand go-kart. It was a revelation and at the end of our allotted time I pressed stop on my digital recorder and Lewis looked and me and said, “Is that it, is that saved now?” He then went on to say, “Can we delete it? I think I said too much.”

Of course I didn’t delete it, and it is still, to this day, one of the best interviews I have done with Lewis because he just got into a zone where he was talking from his soul and not from a pre-planned script.

There is definitely an art to interviewing someone but the most important thing to remember is to listen to the answers they are giving you. Oh, and to get their name right!