Sports
Features
The artwork is one of the most upvoted posts ever on reddit!
Simon Lillicrap
14:00, 30 Nov 2020

With just a handful of pencils, a $5 sheet of paper and a whole lot of talent, Keegan Hall blew up the internet. Totaling 211,000 upvotes, his insanely detailed pencil drawing of Michael Jordan in full flight, which was posted on reddit, became one of the most upvoted in the website’s history, shared everywhere online and viewed by millions worldwide. The second we saw there was no question, we just had to sit down with the man behind the incredible work of art.

“I originally posted that Michael Jordan drawing on reddit and didn’t think much of it as there's so many posts on there I thought it would get lost,” he tells The Sportsman.  “I remember waking up the next day and it had totally blown up. My reddit inbox was completely destroyed with thousands of replies, I couldn't even look at it. From there, just watching it skip around the world from different countries on social media, I get tagged in all these posts in all different languages, it was just crazy, something beyond what I'd ever seen.”

This amazing image took over 250 painstaking hours to create, each minute detail carved in with everyday HB mechanical pencils after the American artist decided to draw every individual face in the crowd, rather than blur the background as was initially planned.

“After I got a quarter of the way through it I had an epiphany of, well if I’m going to do this I just need to do it and I had to go for it.” he explains. “If you watch the timelapse video, in the upper right corner I draw it blurry and go back. You can see when I made the decision to go back and draw individually that is what extended the drawing significantly.” 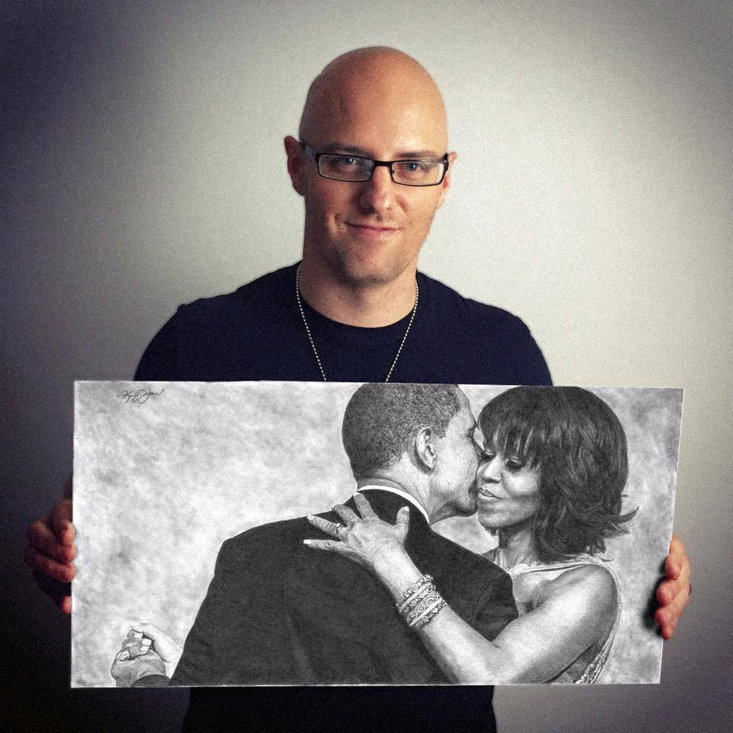 The detailing on the court floor in particular is exceptional, but the original image is taken by Andrew Burnstein from the 1986/87 All Star Game, in which MJ starred. However, inspired to draw the piece by Netflix’s Last Dance and his childhood love for basketball, has added his own amazing twist to the piece.

“I mixed in a bunch of my own images, I replaced a few different people in the crowd throughout, the most obvious one is the lower right hand corner of the screen, at the scores table there is a picture of me. I did a self portrait which I do in a lot of my drawings, I’ll hide myself in the drawing somewhere so I'm there. There are a few other hidden faces [Howard White, Tinker Hatfield, Phil Knight and Larry Miller], it has been fun to watch people find other people in the crowd, it is a mini scavenger hunt to get people more engaged in the work, it’s really cool.”

Hall has come a long way since giving up on art after leaving the University of Washington. Despite completing his degree, he forged a career in sales with basketball side Seattle Sonics having been told his art wasn’t good enough and that it wasn’t a career. How wrong the critics were. Unfortunately for Keegan, it took a moment of tragedy to reignite his love for art. His mum, the biggest supporter of his work, sadly passed away unexpectedly in 2014. 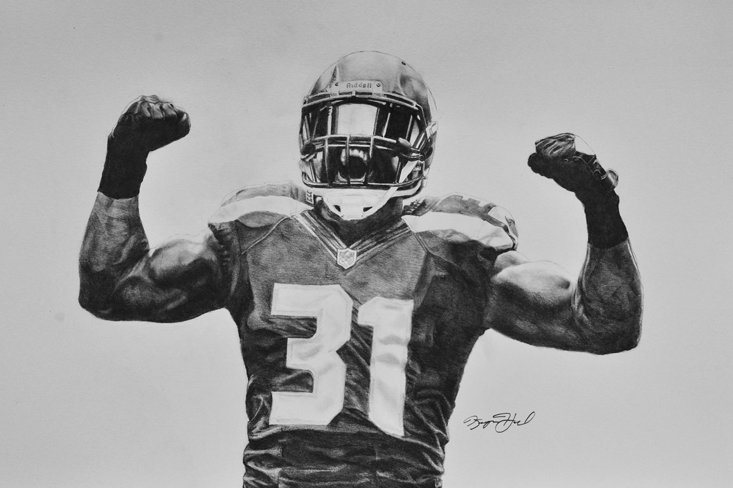 “She was my biggest fan. She was the catalyst that got me back into drawing again. After my mum had passed, I remember driving down the road one day thinking about her and how big of a part of my childhood art was and how much time we spent together with my artwork. That was really the thing that got in my mind and motivated me to sit down and draw something. “Something I hadn’t done in almost ten years, I had done no artwork, nothing for ten years and here I was sitting down to do my first drawing and ironically it was of Michael Jordan. So it is funny how things have come full circle.”

That first drawing of MJ was praised by friends and family online before another friend commissioned him to draw a picture of Seahawk Kam Chancellor, giving him 100 dollars for his first paid piece of work. Chancellor began sharing Keegan’s updates of the picture and from then, things snowballed. With such talent, working alongside global megastars like Russell Wilson didn’t faze him, and, it turns out, sometimes you should meet your heroes. 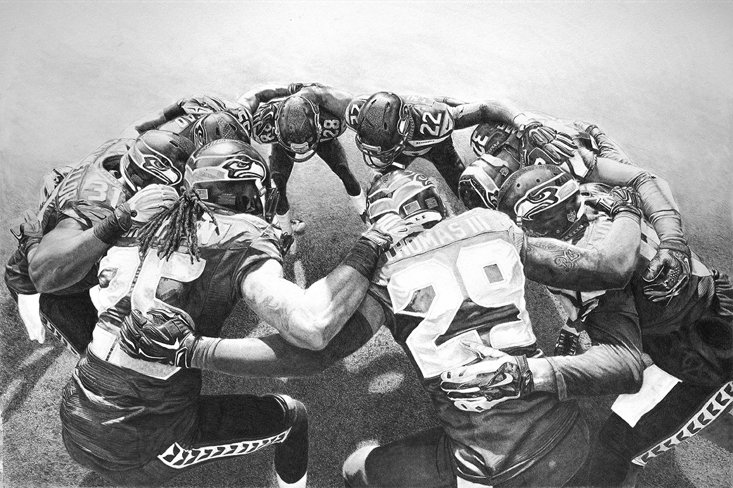 Keegan drew inspiration from his hometown club, the Seattle Seahawks

“The first campaign I did was a pretty big deal for me because not only was I working with one of the biggest sports stars in the world, but Russel actually wanted to do a Facebook live stream.” he explains to The Sportsman. “So that was a bit nerve wracking but he was just so awesome and really down to earth and made everyone feel comfortable. We sat and talked for about an hour and signed prints and touched on loads of different areas from our childhood to our success to sports and it was a really cool conversation and I’ve got to meet at a variety of events and different places and every time i see him he is that genuine person. A lot of people think there is no way he can be like that but he really is.”

More eyeballs saw his work than ever before giving him the opportunity to raise money for charity, something incredibly close to his heart having been raised in a poor neighbourhood. He teamed up with Richard Sherman of the Seattle Seahawks to release 200 prints of an image, each selling for $200. In a matter of hours the prints were sold out and the duo had raised $40k for children in the local area.

“It was really really cool to see the impact that not only art in general can have but my art in particular in giving back to others. It was the first time that I realised there is something to this and this could be a pretty valuable way for me to give back and help a lot of other people. It was how the Keegan 200 Charity campaign was born.” 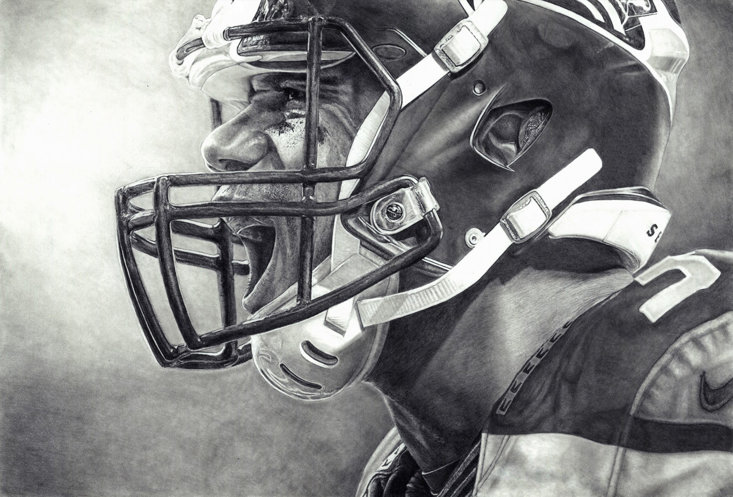 Russell Wilson, who Keegan then got to meet!

Now, his charity work has raised over $440,000 for all kinds of great causes, from helping children living in poverty buy school supplies to cancer research. And he shows no signs of stopping anytime soon. “I didn't have a goal per say but hitting major milestones is cool, past 500k is going to be amazing and now try to get to a million after that is such a big number particularly coming from where I come from in such a small town. To donate $500k or a million the numbers are so big it sounds impossible, it still sounds impossible when I say that so it is something I am really proud of.”