Boxing
Features
The rhetoric about boxing's demise is as old and tired as it is false
Kieran Spratt
06:56, 09 Nov 2019

"It has no future... pugilism will not last."

Given how many times the sport has “died” over the last century and a bit, boxing must have more lives than Grigori Rasputin in Tsarist Russia.

“The people and the press are against it and in a year or two all there will be left of it will be an occasional encounter in a barn for a thousand dollars a side,” Corbett lamented as the 19th century drew to a close.

“These accidents have done it, for they were accidents. It is not possible to hit a man with your fist and kill him. It is the contact with the floor that is fatal.”

Hindsight, of course, is a beautiful thing - we know boxing survived the Victorian era but 124 years ago the sport’s future looked even bleaker than the smog enveloping London at the time.

Fast-forward to 2019 and boxing is, according to some, stumbling around the ring, punch-drunk and in desperate need for someone to throw in the towel. The prospect of this weekend’s fight between YouTube sensations KSI and Logan Paul in Los Angeles has had many trotting out the tired old line that the end is nigh. But is it, really?

Yes, it’s far from perfect. There’s an obscene number of governing bodies and belts confusing matters, and the very real issue surrounding doping has also been slowly hurting boxing for decades now, but fight fans needn’t sound the alarms just yet - history has proven this wonderful sport will survive.

It survived way back in 1895 when pockets of society condemned ‘Gentleman’ Jim and boxing’s bloody brutality (an issue that lingers to this day), it survived again in the post-Joe Louis era of the 1940s, when one of its most popular champions retired and the heavyweight title was bandied around by a number of less-endearing champions.

There’s no question that boxing has seen a sharp decline since the latter half of the previous century - for a long time boxing was one of the world’s premier sports and, in the USA, it edged out baseball and horse-racing as the nation’s favourite pastime.

This weekend, Youtube sensations KSI and Logan Paul go head-to-head in a rematch of their 2018 bout, although as professionals this time around.

Unsurprisingly, the fight between these two social media stars has drawn the ire of some within boxing’s hardcore faithful and, once again, that same old conversation on boxing’s supposedly limited shelf life coming to an end is creeping in again.

Does the introduction of two men to prizefighting, who traditionally wouldn’t step anywhere near a boxing ring, spell the end of professional pugilism? No, of course not, otherwise the sport would have died the night Muhammad Ali took on a Japanese wrestler in 1976 or when ‘Big’ George Foreman fought five hapless souls in one hour a year prior - sideshow attractions have been part and parcel of boxing throughout its history, the only difference this time is the majority of its core fans don’t know who the competitors are. 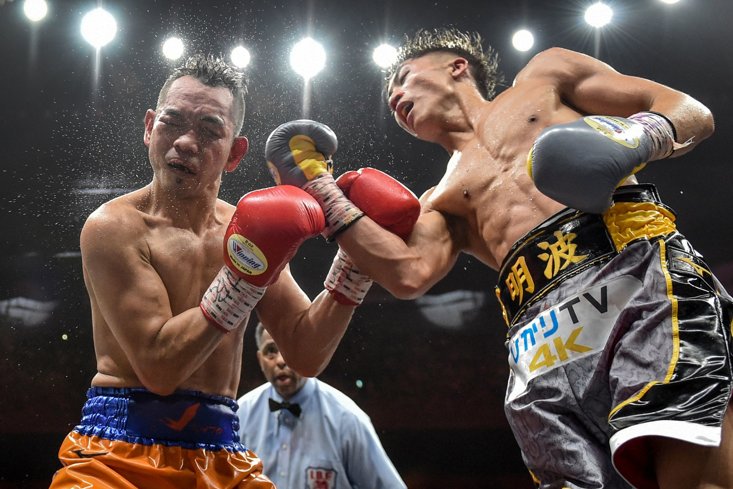 Some have scoffed at the numbers this millenial melee will produce but the stats don’t lie - a whopping 2 million tuned into the first fight online and that figure can only be expected to rise in the rematch.

The fight is also introducing boxing to a new generation of millions - hate it or love it, you can’t deny the power it holds over the next wave of fight fans.

You can’t even argue the fight has no place in professional boxing given the number of great boxing brains within each of the YouTubers’ camps. Former world champion Jeff Mayweather, uncle of a certain Floyd Mayweather, sits in KSI’s corner alongside legendary cutman ‘Stitch’ Duran, while Paul can enjoy the experience of former heavyweight champion Shannon Briggs and legendary trainer Milton LaCroix, who has over 20 years of coaching experience and trained no less than 50 Golden Gloves champions.

That’s not to say these YouTube fights will one day reign supreme over traditional boxing. The mega-fights might be few and far between these days thanks to the aforementioned fractured governing bodies, but when two of boxing’s bonafide giants step inside the ring the numbers are still huge.

Tyson Fury’s valiant draw with American heavyweight Deontay Wilder drew in 4.4m PPV buys globally earlier this year. It’s not all about the numbers though, as even outside of boxing’s A-listers, the sport can still capture the imagination like no other. Just this week, the spectacle on offer between Japan’s Naoya Inoue and Filipino veteran Nonito Donaire at bantamweight level was nothing short of thrilling.

Boxing has its flaws. It did in 1895 and it almost certainly will in 2095, but the sport will always have a place in the hearts of hundreds of millions of us from all corners of the globe. The idea of getting knocked down and getting back up resonates with all of us in our day-to-day lives, and no sport can mirror that as perfectly as this one.

So don’t let the naysayers getting worked up over this weekend’s blockbuster fight tell you otherwise - boxing is as alive as ever.

More
football
From The Ox To Dele Alli, Meet The Photographer Trusted By Football's...
Matt Gordon enjoys PlayStation with Liverpool’s Trent Alexander-Arnold, holidays with rising football [ ... ]
football
Robbie Fowler By Numbers: From L8 to Liverpool Legend
A ferocious storm straight from the heavens hit west London on Wednesday 22 September 1993. Craven Cottage [ ... ]
football
The Crazy, Continent-Crossing, Love Affair...Welcome To The...
5,031 miles. That's the exact distance that separates Aston in Birmingham from the Ghanain village [ ... ]
sports
From Kelly Slater To Serena Williams, The Athletes Stepping...
“We are facing a man-made disaster on a global scale.” Not our words but those of Sir David [ ... ]
football
Fenerbahce's Light Out Of The Dark: When Turkish Women Ruled...
Hearing the cry of ‘Women and children first!’ could understandably take you to that freezing [ ... ]
boxing
Finding Mike - All The Details So Far On Jamie Foxx's Tyson...
Mike Tyson is one of the most explosive and enigmatic sportsmen of all-time. His life has been one of [ ... ]
football
A Wonder Of The Footballing World: Celebrating The San Siro
The position as a modern-day Antipater would be unenviable if one was tasked with nailing down the Seven [ ... ]
boxing
Ken Norton, The Former US Marine Who Used A Self-Help Book To...
Not a soul in attendance, even in his adopted hometown, believed Ken Norton had a chance of beating [ ... ]
football
11 Points And Down In March: Derby County's Nightmare Premier...
It is the 39th minute at Pride Park in front of a roaring 33,000 strong crowd, the majority of whom [ ... ]
motorsport
184MPH On A Push Bike... Meet The Fastest Cyclist In The World
The scorching Bonneville Salt Flats of Utah. As far as the eye can see, the view is only a two-tone [ ... ]
football
Thanks Gaffer - The 19th Century Moniker Modern Footballers...
If you watched ‘The English Game’ on Netflix recently, the countless differences between [ ... ]
football
We’ll Raise Your 27-0 And Give You 31-0, The Biggest Hammerings...
Winning provides happiness. Losing provides wisdom. In football, it takes two sides to create history, [ ... ]
football
Joaquin, We Salute You - Real Betis Royalty Who’s Reigned For...
Eight years. That’s the average length of a professional footballer’s career. Average. Joaquin [ ... ]
football
From The Work Of Art To The Throwback, The Season's Best New...
Leeds United were the first. That’s right, the Elland Road club who are back in the Premier League [ ... ]
tennis
From Stockport Rebel To Hollywood Favourite, How Fred Perry...
“I’m a great believer in trying to look the part. It’s a fetish with me.” For [ ... ]
football
Germany Vs Bayern? Brazil Vs Exeter? These Are The Best Club...
The club versus country row has increased this century, with the soaring popularity of the Premier League [ ... ]
football
Bill Shankly - The Teenage Miner, Midfield Star And Managerial...
Bill Shankly wasn’t only a great football manager, you know. He was one hell of a player too. [ ... ]
tennis
Why John McEnroe Epitomises The Best In Tennis And How It Can...
It’s nearing the end of the long, hot summer. The year is 1984. You’ve got your Member’s [ ... ]
football
Toffees, Trophies And T90s: Rooney’s Football Journey Through...
Wayne Rooney’s right foot was explosive, like a traction engine as Alan Partridge would put it, [ ... ]
tennis
Remembering Little Mo, The Grand Slam Winning 'Killer In Pigtails'
No other player has arguably had such a profound effect on tennis, in such a tragically short space [ ... ]
cricket
It Pays To Be Patient: The Sportsman’s Ode To 140 Years Of Test...
Can you imagine trying to sell Test cricket to the public in 2020, if it was a new invention? Given [ ... ]
boxing
First Glimpse Of Greatness: When Ali Fought Fear With A Parachute...
As he sat there on bended knees in the middle of the aisle, the beads of sweat rolling down his forehead [ ... ]
boxing
The Newport Rocky: The Best British Boxer You’ve Never Heard...
Before David Haye and Tony Bellew, there was David ‘Bomber’ Pearce. A British cruiserweight [ ... ]
us-sports
Vince Lombardi: NFL Legend, Pursuer Of Perfection, Champion...
His name adorns American football’s ultimate prize thanks to his outstanding record as a coach [ ... ]
tennis
Serena Williams Doesn't Need The Grand Slam Record - She's Already...
There is no benefit in asking when it will end, just be glad that it’s happened. And still happening. [ ... ]
football
The Most Successful 'Failure' Ever? Reflecting On Bale's Time...
You’re worth £90million. At home - or rather in your stunning, sunny Spanish villa, hundreds [ ... ]
boxing
Rocky Marciano - The Epitome Of The American Dream And An Age...
With the Great Depression and Second World War firmly in its rear-view mirror, the 1950s saw the United [ ... ]
boxing
Groves, Ali And A Life Inside Boxing: The Sportsman Interviews...
Irish boxing coach Paddy Fitzpatrick is the man you want in your corner. And not just in the ring. He’s [ ... ]
boxing
The Contender: The Reality TV Show With Stallone That Promised...
As the world entered the new Millennium, the sport of boxing and the world of reality TV were at polar [ ... ]
football
Bela Guttmann And The European Curse That Could Last A Century...
In the wide, wild world of football, whilst the tag ‘greatest of all time’ is continuously, [ ... ]