Football
Features
'For some people, the football club has been as much of a part of their life as any family member'
Chloe Beresford
13:04, 09 Sep 2019

Those who attend football in the lower leagues, in particular, understand what goes on during the 90 minutes is by no means the entirety of the experience. It’s about routine. Everyone has their own, but a Saturday home match usually means the same thing repeated 38 times, as their club fulfils its home fixtures.

The morning is all about anticipation, killing time before noon means it’s time for lunch or to set off to a local pub as the atmosphere builds. As others stick to their matchday rituals, you see the same people on the way, call in at the same local shop, or stop at the same programme seller every single week.

Waiting for team news, the discussion centres around the manager’s choices, with either disappointment or delight. You might think his choice to bench the usual striker is a bad one, but your mate is adamant it’ll put him in his place to spend a week out of the starting lineup.

Everyone who walks through the turnstiles is there for the same reason - to see their team win. Yet it is the sense of community that binds these people together. They come from all backgrounds. Some are wealthy, some are not, some are young, some are not, children, parents, grandparents.

They are not the same, yet they cheer together, laugh together, and sometimes cry together, through good times and bad, they are there for each other. To experience both joy and pain in a group setting helps to find our common humanity and negates the divisions that usually separate us.

We ditch our natural cynicism when we hug a random stranger after a goal in the 90th minute, and it feels good. The joy comes from belonging to something that is bigger than ourselves as individuals.

This is why there was an outpouring of sympathy from the wider football community as Bury FC were expelled from the EFL on August 27. At that moment, their entire fanbase had lost what was sacred to them, as well as everything that came with it - their connection to the community, their routines and even their friends.

Bury Football Club
@buryfcofficial
⚪️🔵 Everyone at #buryfc are overwhelmed with the support shown for us up and down the country, from the Premier League all the way down the pyramid, thank you to all the #footballfamily #thislovewilllastforever 💙 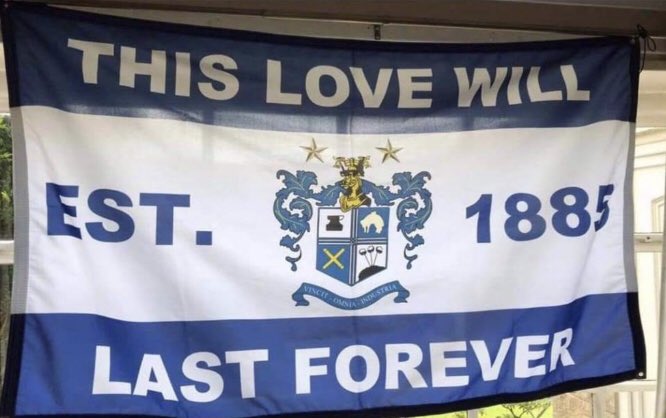 Many had lost their jobs, and local businesses will have to cope without the much-needed extra revenue that’s generated when Bury play at home. Those within the club may have worked in football, but none benefited from the astronomical sums of money that exist at the very top level of the game.

For many, the feeling of loss when the deadline passed without anyone to save the club resembled the grief experienced upon the sudden death of a loved one, disbelief, emptiness and shock.

Indeed, the thought of memories shared at Gigg Lane with relatives who’ve since passed must’ve brought back that sense of agony at their departing, as the tradition of attending matches would no longer continue.

“My grandma and my mum were both Bury fans, and the former had just come back from a holiday in Torquay, so it was decided that it would be fitting if the first time I attended a Bury match was against them. It was on a Tuesday night, a few weeks before the end of the season,” Shakers fan Peter Taylor told The Sportsman. “It was a 1-1 draw, infact I didn’t actually witness a win until the following campaign, but from the start there was just something almost imperceptible that made going seem like home - quite a comforting feeling that I still remember a quarter of a century on.”

For some people, the football club has been as much of a part of their life as any family member, attending the matches since before they even went to school.

“I first went to a Bury game when I was three-years-old, with my dad,” supporter Jamie Hoyle recalls.

“I haven’t looked back since. It’s definitely a family and community thing for me. What happens on the pitch is, of course, important, but I’m a Bury fan because it’s part of my heritage. I’m proud of our history, and proud of our town, I wouldn’t have it any other way.

"On Saturday, August 31, the Shakers were supposed to host Doncaster Rovers at Gigg Lane, however there was no team left to support. “It was absolutely devastating,” continued Jamie. “I went to the ground on Wednesday morning ahead of some media appearances, and I just wept.

“Bury has been such a huge part of my life for as long as I can remember, I haven’t known a time where I haven’t had a Bury game to go to, or look forward to. To lose that is heart-breaking, not just for me but for our community as a whole. Football is about so much more than 90 minutes on a Saturday, and I fear for our town now that has been taken away.”

For this Northern team, there’s no light at the end of the tunnel, with no decision on whether they can be resurrected. However, their supporters will keep working to ensure there’s at least something to cheer, for themselves and for future generations.

“I’m going to keep fighting for some sort of football club in Bury, be it re-entry to League Two next season or nestled in the North West Counties,”insisted Jamie, who has made a short film  on YouTube about what Bury FC means for the area.

“This town needs a football club, it’s a powerful thing to have thousands of people from all walks of life congregate together on a Saturday afternoon, and for Bury to lose that forever would be unthinkable. We owe it to ourselves and to our town to keep working towards that goal.”

x
Suggested Searches:
Manchester United
Liverpool
Manchester City
Marcus Rashford
Premier League
More
football
Future England Manager Wiegman Shows What To Expect From Her...
Sarina Wiegman will have been whetting the appetite of England fans as her Netherlands side have scored [ ... ]
boxing
Outside the Ropes: Jamie Quinn, The Journeyman Fighter Winning...
In former times, a journeyman was a worker who had finished learning a trade [ ... ]
rugby
Where Does The British And Irish Lions Tour Rank Amongst The...
The British and Irish Lions play the first of their three test matches against South Africa today, with [ ... ]
football
On This Day: Luis Figo Joins Real Madrid In The Most Controversial...
In the midst of the summer transfer window 2021, we rewind the clock 21 years, look back at the [ ... ]
sports
Olympic Opening Ceremony At Tokyo 2020 Was A Reflection Of Japan's...
The Japanese opening ceremony was not what we've come to expect from opening ceremonies. The eerily [ ... ]
sports
Who Are Team GB's Flag-Bearers For The Olympics Opening Ceremony?...
The Olympic Games are going to look a little different this year, and Team GB are starting as they mean [ ... ]
sports
Muhammad Ali, James Bond And A Jetpack: The Best Ever Olympic...
Across all sport, few events, if any, inspires unity and collectivism in the same way the [ ... ]
boxing
Last Round, Folks: When Boxing’s Invisible Champion Was Blitzed...
History has not been kind to Floyd Patterson. Countless world champions have drifted through the annals [ ... ]
cycling
The Music Man And The Machine: When Wiggins And Froome Went...
Brits, find a better sporting highlight reel than that of 2012. We dare you.  Simply put, it was [ ... ]
golf
McIlroy’s Open Victory: When Neither Garcia, Fowler Nor Fowl...
“The Open is the one that we all want, the one that we all strive for and to be able to hold his [ ... ]
motorsport
F1's Grey Area Exposed Once Again As Hamilton & Mercedes Take...
As Lewis Hamilton paraded around Silverstone waving the British flag, after winning his home Grand Prix [ ... ]
sports
Make War, Not Love - The Times The Sport Stars Lost It
The case was announced on July 9, 1975: The State of Minnesota vs. David S. Forbes. It became the first [ ... ]
rugby-league
Rugby League Eyes ''Best World Cup Ever Seen'' After 2021 Event...
The Rugby League World Cup this week got the go-ahead to take place as planned in 2021, and with less [ ... ]
football
The Best British Player Ever? It's Time To Put Some Respect...
Happy birthday to Gareth Bale. At 32, the Welshman can boast a career that others can only dream of. [ ... ]
golf
Bryson DeChambeau's ''8-Year-Old'' Tantrum Has Nothing On Di...
Sports people are role models, so goes the consensus, but things don’t always play out that way [ ... ]
football
An Inside Look At England's Euro 2020 Campaign From The Kitmen...
England has a squad packed full of young stars. This summer, led by national treasure Gareth Southgate, [ ... ]
motorsport
The Birth Of Silverstone Thanks To A Race Between A Prince,...
April 14, 2019, China, and the third race of the season at the Shanghai International Circuit. Lewis [ ... ]
boxing
Pandemonium In Atlanta: The Last Great 15 Round Title Fight
The 1980s was a transitional period for the world of boxing. The fledgling cruiserweight division, inaugurated [ ... ]
football
From Jules Rimet To The FA Cup, The Sporting Trophies That Went...
When the World Cup trophy was stolen in London on 20 March 1966, it threatened to plunge the most famous [ ... ]
football
Stuart Pearce Lauds Pivotal England Star Raheem Sterling Ahead...
Ahead of Euro 2020, not many people had Raheem Sterling starting for England. The Manchester City man [ ... ]
football
Mancini v Southgate - The Tactical Battles Which Could Decide...
Could England become European champions on Sunday night? They have shown so far in Euro 2020 that they [ ... ]
tennis
The Day A Flawless Fred Perry Stormed Wimbledon To Win A £25...
“Packed Centre Court sees strenuous struggles for Championships!’ screamed the Pathé [ ... ]
boxing
From Knocking Out A Horse To Missing Gold Medals: Five Of Boxing's...
Boxing has had its fair share of folklore since the introduction of the Queensberry Rules, the generally [ ... ]
us-sports
The Luckiest Man On Earth: When Lou Gehrig Bid A Fond Farewell...
In the Friends episode, The One Where Old Yeller Dies, the character Phoebe Buffay (Lisa Kudrow) watches [ ... ]
football
Portugal, Fernando Santos And An Identity Crisis - What Next...
Portugal’s disappointing last-16 exit at Euro 2020 has not given rise to an angry mob calling [ ... ]
football
Underwhelming Netherlands Were Destined To Fail Under Serial...
It took just a few seconds for Netherlands’ Euro 2020 campaign to go from excellent to exasperating [ ... ]
football
Pocket Playmaker Marco Verratti Is Still Italy's Most Important...
Marco Verratti might be the best Italian footballer never to have played in Serie A. Having made his [ ... ]
football
Lewandowski Gets Goals, Sousa Shows Style, But Poland Follow...
With the exception of Euro 2016, the Polish national team follows a pattern. Five years ago in France [ ... ]
cycling
10 Tour De France Facts You (Probably) Didn't Know That Will...
Life is a numbers game. We’re not talking Henry Hill and Goodfellas here, the mob-run racket that [ ... ]
tennis
History Makers, Record Breakers And Pimms: Why Wimbledon Is...
After a year away, Wimbledon, arguably the most anticipated Grand Slam and hottest ticket on the [ ... ]