Prior to Manchester City’s 8-0 victory over Watford on Saturday, Oleksandr Zinchenko had started every game under Pep Guardiola this season.

At £5.6 million, Zinchenko offered a cheaper route into City’s back-line. However, the 22-year-old was completely dropped from the team sheet in GW6 against the Hornets as Benjamin Mendy made his first league start since April.

More than  100,000 managers have since transferred the Ukranian international out of their teams and could potentially drop in value ahead of Gameweek 7.

Otamendi has stepped up for Guardiola following the withdrawals of Aymeric Laporte and John Stones due to injury and the Argentine appears City’s cheapest starting option in defence.

On the other hand, it feels as though Chelsea’s Tomori has slightly slipped under the radar and the 21-year-old offers a starting role in a ‘Top Six’ defence at just £4.5m, providing a huge saving.

Despite losing 2-1 against league leaders Liverpool, the Blues won the second half 1-0, implying a gradual improvement in the young side.

Each of Chelsea’s next six opponents obtain a fixture difficulty rating of two - BHA (H), SOU (A), NEW (H), BUR (A), WAT (A) CRY (H) - and whilst selected by just 1.1% of teams, Tomori makes a great value differential in Frank Lampard’s side. 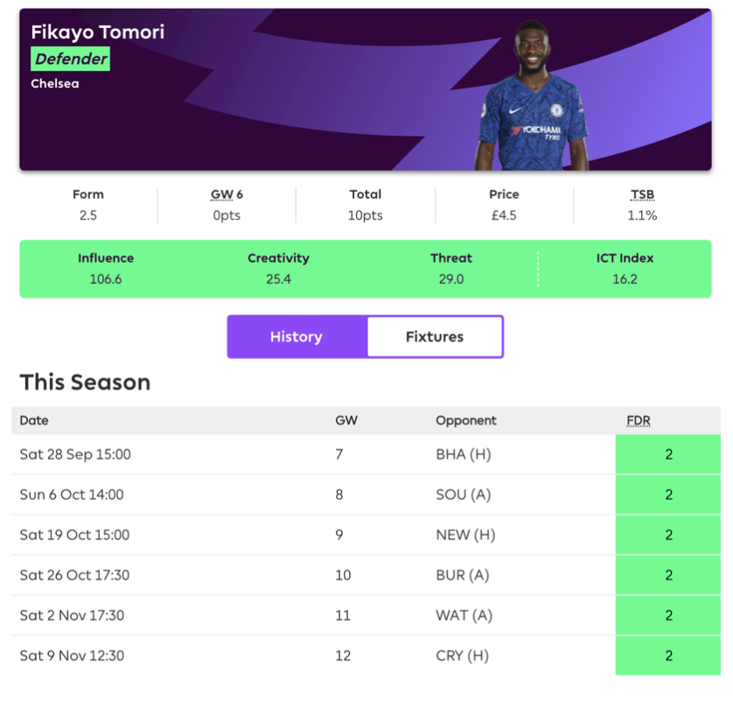 Also, John Lundstram has now recorded two double-figure tallies this season and rockets up the ranks as the top-scoring defender in FPL.

Lundstram was unearthed at the start of pre-season playing in a central midfield role under Chris Wilder, suggesting the reasoning behind his success, pushed further upfield.

The Englishman has risen to £4.3m since the start of the campaign and looks a good alternative for those looking to save those precious funds for big hitters elsewhere.

On the topic of defenders, despite a slow start to life in the 2019/20 Premier League season, Liverpool’s Andrew Robertson has started to pick up his form.

Within the first three gameweeks, the Scottish full-back recorded three blanks, but he has now cemented 19 FPL points in his last three appearances for the Reds.

Team-mate Trent Alexander-Arnold has tallied 20 points in his previous three matches but is £0.2m more expensive than Robertson. If you’re looking to save money in that department, it’s always an option.

After producing a further goal and two assists, The Ginger Pele now sits as the second-top points scorer across all players in FPL and the Belgium playmaker doesn’t look like he’s slowing down any time soon.

When other heavy hitters like Pierre-Emerick Aubameyang at Arsenal are consistently producing the goods, that £2.0m difference could be all the difference elsewhere.

And finally, we have Roberto Firmino.

Firmino is arguably Liverpool’s most influential player in their exquisite attacking front-three and costs a whole £3.0m less than Mohamed Salah.

Having mustered up three goals and four assists in the Premier League this season, the Brazilian has acquired more points than Sadio Mané and sits just six points behind The Egyptian King.

We can’t afford all the Premier League big guns so these valuable funds can be extracted and reinvested in other departments to strengthen our squads.