Here’s a question. What links the Kray twins, Colin Farrell, Vinnie Jones and Take That? It just happens to be - and not a lot of people know this, wink, wink - a tiny corner of Bethnal Green, that’s home to the world famous Repton Boxing Club, the oldest fighting gym in the UK.

First set up way back in 1884, the historic club is housed in a former Victorian bath house deep in London’s East End. While Ronnie and Reggie fought here as young men in the Fifties, its iconic old-school setting led Guy Ritchie to film scenes for Lock, Stock and Two Smoking Barrels, featuring former Wimbledon hard-man Jones, back in 1998. And Ritchie was back from more when he filmed part of high octane gangster flick, The Gentlemen, starring Irish actor Farrell and US star Matthew McConaughey, in the club last year.

And it’s not just Hollywood (or more specifically Guy Ritchie) who’s come knocking. A young Gary Barlow and Robbie Williams danced aimlessly in Repton’s boxing ring with the rest of Take That for the video to the band’s first top-10 hit, ‘It Only Takes a Minute’, in 1992. Check it out online, it only takes a minute...

But having hosted plenty of star names, Repton have nurtured many of their own too, producing hundreds of boxing champions including world Jr Middleweight champion Maurice Hope, welterweight world champion John H. Stracey, Commonwealth Light-welterweight Darren Barker and their own legendary coach Tony Burns. Classic pictures of all the successes adorn the walls which seep with 140 years of history. 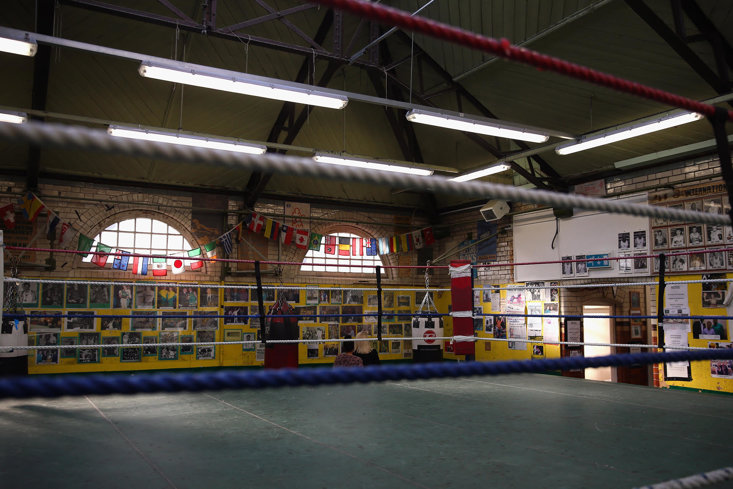 Inside the famous Repton Boxing Club gym in Bethnal Green

West End lad Dave Robinson, who jokes he's an immigrant in the East of the capitol, is the club’s chairman having been part of the set-up here for nearly half a century. “Bethnal Green was a smoggy place,” he tells The Sportsman of the area he first moved to in 1963, his strong cockney accent adding to the sense this place belongs to a famous corner of London. “It’s a traditional old area, very working class.”

Curiously, the boxing club was actually founded by Repton Boarding School in Derbyshire, 160 miles away. With privileged backgrounds, members of the school visited the poorest parts of the capital in the early 1880s to help, and taught the young men of the time how to box.

“They were disgusted at how people were having to live round here,” Robinson tells us. “They set up Repton and also the Oxford House, for young kids who had nowhere to live. There was lots of petty crime on Brick Lane, prostitution, pickpocketing and it was a deprived area, so the charity came down from Derbyshire and organised the club with the local police and that’s what kicked it all off.” 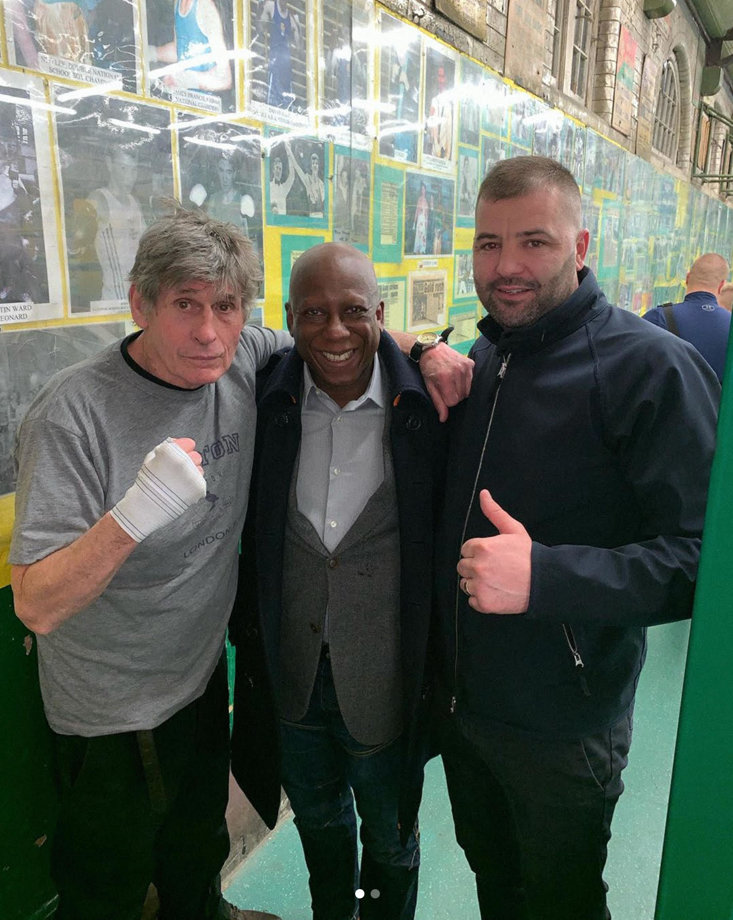 Notorious gangland criminals Ronnie and Reggie Kray both turned professional at the club and both had strong boxing pedigree. While Robinson didn’t meet the pair, he heard all of the stories from those who shared the same circles.

“They were fair fighters and went pro but they went down the wrong road very early,” he reveals. “Ronnie was completely crackers and people knew that early on. Reggie could have been a good fighter and businessman but he was dominated very much by Ronnie.

“They had an older brother, Charlie, but Ronnie dominated the family. If he wanted anything done, that was it. As I understand, he was a quite evil bastard. Once he made his mind up on someone, you knew, 24 hours on, they’d be attacked with a machete, a sword or gun.”

Chilling, though even now, at the local Blind Beggar pub synonymous with the duo, memorabilia is sold to raise money for the boxing club. Only recently, Robinson donated to charity a headguard belonging to one of the brothers. 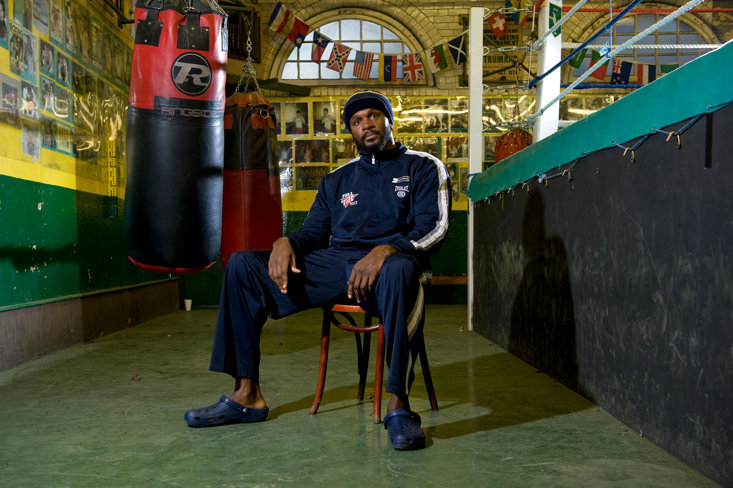 Audley Harrison back where it all started

Another money-maker for the club is the use of the gym as a setting for film, television and music videos though Robinson and Co. have to be extremely coy and keep any information under wraps.

“The request normally comes via an agency,” he explains. “They don’t tell you who but they say a group of people are coming down. So I, or one of my committee colleagues, meet them and they’re very, very secretive; then on the day they say, ‘Look, we don’t want anyone around, we just need someone to look after this, that and the other’.

“Then I find out that it is Take That or whoever, but I’m sworn to secrecy… Olly Murs was down here recently but since March we’ve had noone down here. No film or pop stars, it’s been a ghost town because of what’s been going on.”

Repton Boxing Club is a vital part of the community especially during such a difficult time. For the young boys and girls in the area who attend, Robinson has built the club up on respect.

“When we get a new lad, I say, ‘Listen, at all times, you respect me, the trainers, I expect you to respect everybody; if you don’t you’re out the door.’ I give them the message very quickly.”

If they don’t heed the advice they’re gone, as a young Audley Harrison, Olympic and Commonwealth champion, found out the hard way.

“Audley first came for a couple of nights,” Robinson explains. “He gave it the big I am and Tony [Burns] said ‘I don’t need you, you can piss off. Turn up when you want to be respectful.’ So he went away for about six weeks, then came back and was a lot more respectful. Apart from the extra boxing skills, he learned some manners as well!” 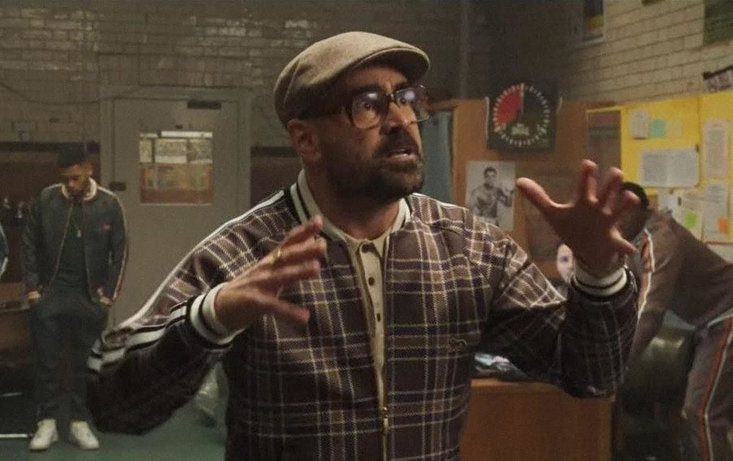 Colin Farrell in 'The Gentlemen' filmed at Repton Boxing Club

The phrase ‘No Guts, No Glory’ is plastered everywhere in the gym, coined by Robinson himself after some of his well-fancied fighters ‘let him down’ and wilted in Liverpool 30 years ago. “I gave them a tremendous rollocking,” he says. The club is all about principles, discipline and determination.

And this inspirational corner of London’s East End is known across the globe. It’s been featured on billboards in New York City when club representatives went over for a charity fundraiser, funded by none other than Paul McCartney (yes that Paul McCartney!) and has adorned posters as far afield as Lagos for a boxing event in Nigeria. Everyone knows of the Repton, says Robinson.

“If I go on holiday and put my Repton t-shirt on, within 20 minutes someone is tapping me on the shoulder, and they could be 20 or 90 years of age,” he laughs.