With three weeks to go until the final event at the World Cup Slopestyle tournament in the Czech Republic, Covid-19 hit, and in turn, safety precautions meant that ski resorts in Europe were shut down faster than - well, a World Cup-winning snowboarder on a slope. No podium, no applause, no snow - nothing.

"It’s quite surreal," explains Katie, "that I’ve won a World Cup without being at the actual event. I got the call yesterday to say that I’d won based on being 400 points clear of my closest competitor. I’m over the moon, it’s the best feeling in the world, but it is a bit weird that it’s so..."

"Yeah. We haven’t had time to celebrate yet. We’ll probably all go out for dinner."

You can’t - we’re all supposed to stay at home on lockdown now so you’ll have to get your mum to make a special tea.

"That’s very true, I hadn’t thought of that."

What about the prize? Isn’t it a massive crystal globe? Will they have to send you vouchers instead?

"I hope not! Apparently it’s being sent to me," she says. "And then the FSI will arrange a proper presentation at some point."

Let’s hope for her sake they’re not sending it via the same - nameless- company that delivered to mine last week, they’ll just chuck it over the fence and it’ll be smashed to smithereens. So did she go big on celebrations after her 2017 Big Air World Cup in Moscow?

"Um, not really. We went for a team dinner but were on an early flight home the next morning so we couldn’t go too mad."

You must have had a glass of champagne on the plane, at least?

D'oh! Weird World Cup-winning situations aside, we hear a lot about ‘inspirational’ athletes but Katie would probably win the world title for that, too. At the age of three she went on a skiing trip with her family. While most kids would have been face down in the snow having a tantrum, Katie strapped on a set of skis.

Having got the hang of two boards, she decided to have a go at snowboarding (her parents are both keen snowboarders themselves) and - literally - found her feet immediately. Apparently snowboards for five-year-olds aren’t that easy to come by but she got one, and the rest is history.

"I didn’t just do snowboarding," says Katie, "I also started doing gymnastics, so I’ve spent my whole life throwing myself around the place."

Did being a gymnast give her an edge over her competitors?

"Absolutely. Gymnastics is all about balance, spatial awareness and strength, so I definitely benefited from that and I still incorporate gymnastics into my training."

At the age of 15, Katie was the first female snowboarder to land a double backflip on a snowboard. A year later, she landed a backside double cork 1080 – that’s an impressive two full flips and one full spin, for the uninitiated. If you look it up on YouTube it’s a bit like when a drunk person falls down the stairs.

"It’s a bit more complicated than that,’ she laughs, "but that double backflip land was one of the most incredible moments of my life. Being a freestyle snowboarder I’ve been able to add new tricks to my routine throughout the years, so I’m always looking for more creative ways to jump." 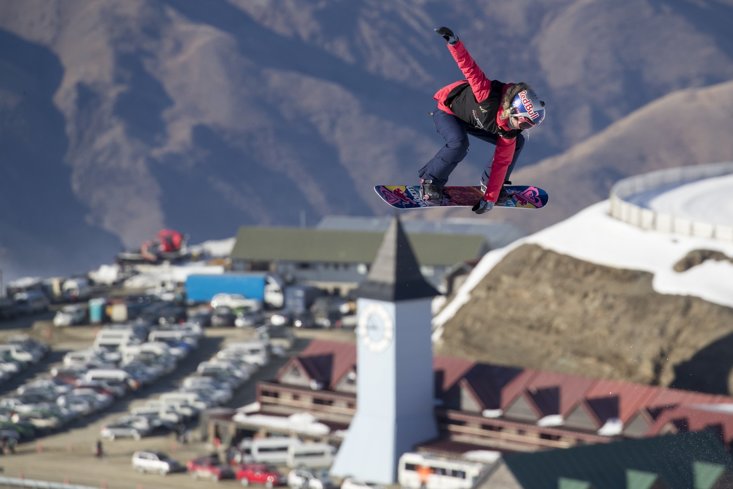 Gymastics is also about grit, motivation and mental strength, something Katie needed in spades when she sustained a devastating injury in training on the eve of the 2018 Olympics in South Korea. Fresh from her Moscow win, Katie was in top form and had high hopes for a medal with Team GB.

"That injury was so awful," she says, quietly. "I’ve had other injuries (Katie has also broken her back, both wrists and left shoulder, and had double knee surgery) but as soon as I hit the ground I knew it was bad. I’ve never experienced pain like it."

Her heel had broken in two. After emergency surgery in Seoul she was out for 18 months following a series of setbacks and complications, seven operations and a year of rehabilitation.

"I was on crutches for the first few months, and sometimes in a wheelchair. I needed surgery to get rid of the build-up of dead skin, which meant taking skin grafts from my hip. I was pushing myself at every stage in the gym with physio, trying to build up my physical strength, but the pain wasn’t getting any better because the pins in my heel were sticking out and rubbing my Achilles. Mentally it took everything out of me and I’m not going to lie, there were times that I thought my career was over."

How did you get through it?

"My family was amazing, and I had so much support from my teammates, my sponsor and the public. I just had to find the strength to focus on getting back to where I was when it happened, to visualise where I wanted to be and just cling to that. As soon as I got in the gym and was able to start training of some sort again, my motivation was really strong.

"We use trampolines and crash mats when we're learning new tricks, then it’s airbags on the slope until we’re ready to jump for real. It meant going back to basics so I could remember how to flip upside down."

Katie, who's a Red Bull ambassador, pushed herself to the absolute limit, coming back to the World Cup circuit last August and clinching silver – an incredible achievement. Now her focus is on the 2022 Winter Olympics in the French Alps, with the small matter of Covid-19 putting paid to training plans for the foreseeable future.

"It’s a really scary time for everyone," says Katie. "Nobody knows what’s going to happen so we just have to be patient and hope it won’t be too long before we can train again."

Never mind toilet roll, let’s hope the shelves in her local supermarket still have some champagne on them.