The club versus country row has increased this century, with the soaring popularity of the Premier League dwarfing international football. The English top-flight is the most-watched sports league in the world, beamed into 643 million homes in 212 territories to generate a potential TV audience of a whopping 4.7billion. To put that in context, two years ago, 3.6billion people watched the 2018 World Cup.

Home club success versus international triumph therefore remains a relentless debate, but while friendly arguments on the topic today tend to take place in pubs (or Zoom calls, if we are being completely honest) there was a time when things were settled the proper way - on the pitch. Could Charlton ever beat France? Did Exeter have the minerals to take on Brazil? There was only one way to find out. Here are some of the incredible fixtures from yesteryear, between your regular clubs and the biggest football nations on the planet.

One of the most bizarre results and match-ups you will see - Charlton Athletic, a modest club from south-east London, once beat Les Bleus. 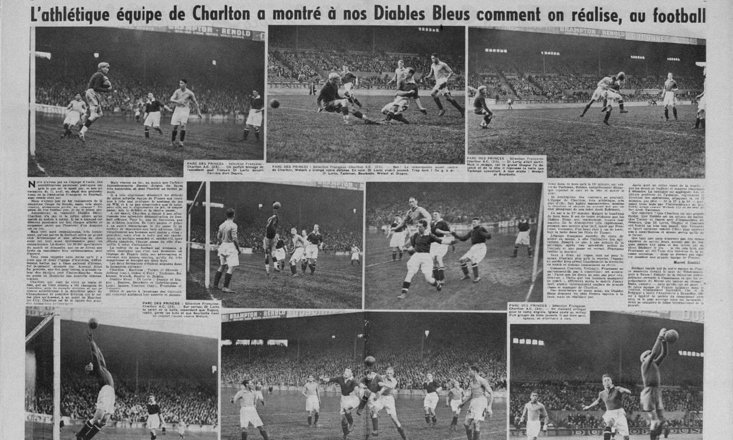 The Addicks took on the French in March 1937, on the way to finishing second in the First Division (just two years after sealing promotion from the third division), because rising political tensions across Europe meant France’s game against Italy was called off at just 48 hours notice following protests. It was Charlton who filled in and to this day, nobody is quite sure why.

Paris-Soir, though, the country’s most popular newspaper at the time, were excited at the prospect of such an unusual fixture, claiming English sides boasted “superior technique and remarkable team spirit” and insisted that “right now Charlton are the most attractive team in England”.

It proved correct, with the Londoners, who had beaten Huddersfield Town only a day before, matching the sophisticated style of the Azzurri with a dominant victory at Parc des Princes in the French capital.

Astonishingly, Brazil’s first-ever match wasn’t against fierce rivals Argentina, or Colombia, Uruguay, Paraguay… no, it was against Exeter City in 1914, currently playing in England’s fourth division 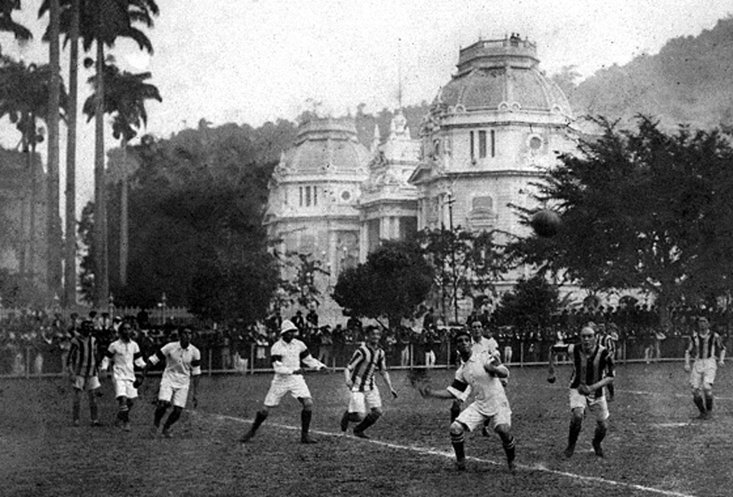 The Grecians, only 13 years old at this point, had been selected after the English FA received an invitation to send a club over to South America. After playing eight friendlies in Argentina, they stayed on for another game against a nation who would go on to become the greatest, most-storied international side of all-time. Brazil were made up of players from Sao Paulo and Rio De Janeiro, a process known as Selecao, which remains the nickname of the team to this day.

The history books are sketchy on this one regarding the official score line - some report the Brazilians won 2-0 courtesy of goals from Oswaldo Gomes and Osman, while others state it was a 3-3 draw. According to TheseFootballTimes.com, the game nearly didn’t happen after the Exeter team were arrested after taking a dip in the sea where bathing was banned! Luckily, they avoided being sent home.

After a Three Lions friendly in Turkey back in 1987, the Observer sportswriter Frank McGhee, who lived in the Buckinghamshire town of Aylesbury, suggested to England boss Bobby Robson that a warm-up against his local team would aid his side’s preparation for Euro '88. Eventually, rather amazingly, Robson agreed. And so Gary Lineker, at this point used to sunnier surroundings now he was a Barcelona striker, and the rest of the England squad turned out at tiny Buckingham Road in front of a record crowd of 6,031 as residents flocked to see the national team in action in their own backyard.

Aylesbury, who had won promotion from the Beazer Home League into the Conference, had been in red-hot form but of course they were no match for the might of England, who comfortably beat them 7-0 after Robson sent a full-strength squad. Liverpool’s Peter Beardsley grabbed four of the goals and stayed on the pitch 20 minutes after the final whistle to sign autographs. Lineker, Trevor Steven and Dave Watson scored the others.

However, the warm-up didn’t do the trick, as the Three Lions finished bottom of Group 2, losing all three of their games against the Soviet Union, the Netherlands and rivals the Republic of Ireland.

Bayern Munich, Germany’s biggest and most successful football club needed supreme opponents for the opening of the Allianz Arena in May 2005, so who better than the national team? 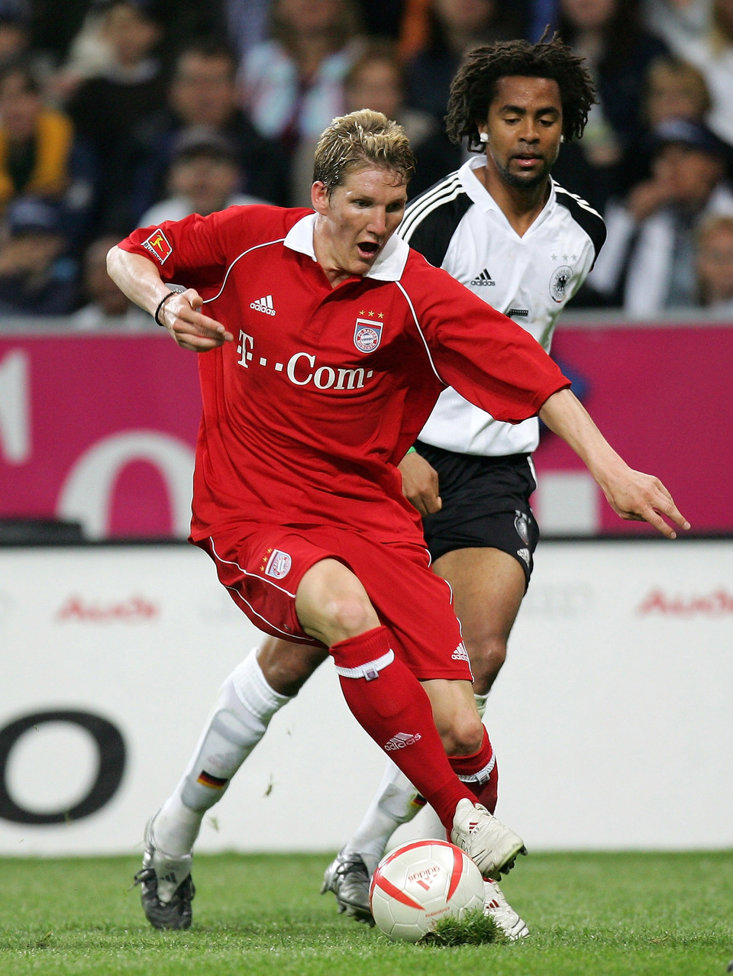 A capacity 66,000 crowd packed into the Bavarians’ new home following their departure from the famous Olympiastadion and witnessed five Germans playing for the hosts, including winger Sebastian Diesler, who wrote his name into the history books with the first-ever goal at the stadium, as Bayern won 4-2.

Such is Bayern’s dominance in the Bundesliga, and rivals’ disdain for their success, supporters all over will have been keen to see the country’s stars come together to beat the powerhouses, but had no such luck.

"We gave Bayern a nice opening gift," national coach Jurgen Klinsmann said. "We never like losing but will not lose sleep over this defeat." Nice.

Germany and Bayern legend Franz Beckenbauer added, "It is the first time the stadium has had 66,000 fans inside and the atmosphere was incredible. I have seen almost all stadia in the world, but this is the best.”

It was a full switch of allegiances for ninety minutes back in 1999, when Barcelona hosted Brazil to mark their centenary celebrations.

Ronaldo (the original R9 Ronaldo) returned to the Nou Camp, two years after leaving for Inter, and scored for Brazil. Barcelona frontman Rivaldo fired home a typically powerful left-footed strike for his country against his current club team (crazy). Luis Enrique and Philip Cocu, the current Derby County manager, netted for the hosts. 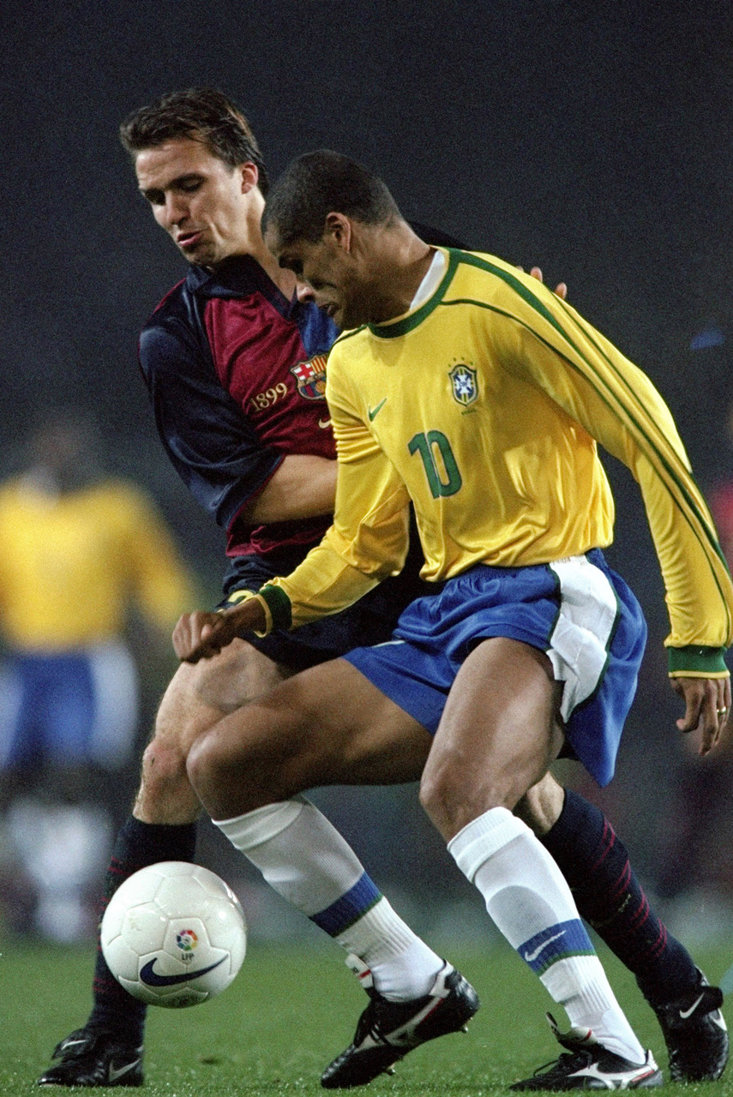 Sonny Anderson, meanwhile, played for the Catalans against the nation of his birth before going on to win his six international caps.

This was a stunning match-up but a full decade before Barca’s domination of Tiki-Taka. While this one ended in a 2-2 draw, we would have loved to have seen Lionel Messi, Xavi, Andres Iniesta take on the five-time World Cup winners. What a humdinger of a tie that would have been.