“If you sat down and tried to write the most dramatic two seasons ever, you wouldn’t even dream of Spygate or a global pandemic. But it actually happened, and I’m grateful we were there to capture it.”

From Marcelo Bielsa and his team’s covert surveillance of Derby County’s training sessions to Covid-19 halting all football, before Leeds United finally returned to the big time after a long, arduous 16 years away, it’s an understatement to say it’s been an eventful two seasons at Elland Road. It had to be seen to be believed and has been, in great detail, thanks to the brilliant Amazon documentary, ‘Take Us Home: Leeds United’.

This is a story about the people who make a football club. It’s more than the action which takes place on a Saturday afternoon. And we’ve been talking to two people who made this enthralling series happen.

When Anouk Mertens and Stevie Rowe, of NEO Studios, embarked on filming after the idea for a club documentary was floated by Leeds owner Andrea Radrizzani, they couldn’t have known what to expect. But they’re empathic about the impact their documentary has had.

“Dirty Leeds is gone,” Anouk laughs during an exclusive chat with The Sportsman days before the club recorded their second win of this new season. “Going from Dirty Leeds to almost Premier League darlings, how do you do that?”

Well the answer, in hindsight, is simple. Give a behind-the-scenes look at one of the most dynamic teams in the Championship, representing one of the most storied clubs in English football, with the most passionate of fans, oh and throw in one of the world’s most enigmatic managers. As a result many people now see Leeds in a new light.

The club’s iconic manager, Marcelo Bielsa, has played a massive role in turning the fortunes of the club around. And so naturally, he plays a huge part in the documentary. So how was he to work with?

“Bielsa was the biggest challenge,” recalls head of production Stevie Rowe, “he was very resistant to allowing cameras anywhere and he still is to a degree, but even he got used to the same crew being there. It’s a Big Brother mentality, the cameras are there for so long you end up ignoring them anyway.

“Bielsa is a very mythical character and if anything this documentary highlights that. Things were always on his terms; our crew would have a list of questions and we’d probably get to ask the first one and that was it because it was then a 45-minute monologue from Marcelo. The best stuff was when we were behind him on his shoulder and he was amongst the players, seeing him in his natural environment is where we captured the best of him.”

And what about the players?

“It was all about building trust, and by using the same crew over and over again it doesn’t take long for them to be part of the furniture,” continues Rowe. “We got to a point quite quickly where the players were approaching the crew to suggest shooting different things and going to their houses. A few of them became friends along the way which was very helpful.”

“As things progressed they were comfortable being themselves,” adds managing director Anouk Mertens. “They aren’t actors who need to be characters in a series, their thing is to play football. We tried to portray them as honestly as possible.”

One actor who was involved, however, was the legendary Russell Crowe, and it wasn’t difficult to secure him for the role of narrator. It turns out the Gladiator star is a huge Leeds United fan.

“We needed a supporter to tell the story, not just any Hollywood name as it wouldn't work, Leeds fans would never allow that. It had to be a supporter, a proper fan,” insists Mertens.

“The easy part was getting him on board, the harder part was working around other projects and movies he was working on. He’s been very supportive of the project, we sent him the new Leeds kit as a thank you!”

The popularity of football documentaries has soared in recent years with fly-on-the-wall films following Manchester City, Tottenham and Sunderland providing extremely insightful, gripping viewing. So what’s the secret to their success?

“Documentaries have taken sport to a new audience,” believes Rowe. “A lot of them now focus on the fans and the backstory, and less about what’s happening on the field and that appeals to non-sports fans. And streaming platforms have spent a lot of money, which means you have super-high production levels that have pushed the genre on. But ultimately, it always comes down to storytelling.”

In this case, ‘Take Us Home’ is the story of struggle, the loss of annual glamour clashes with Manchester United, Liverpool and Arsenal for the less glitzy trips to Yeovil, Port Vale and Oldham, and, ultimately, the ecstasy of returning to the promised land.

“A whole generation of kids have never known Leeds in the Premier League but are still passionate Leeds fans,” Rowe tells us.

“It’s a wonderful one-club city, and everyone in that city lives and breathes Leeds United and for us that was a very big part of the story-telling. Other sports documentaries sometimes don’t focus on the fans as much, but for us the supporters had to be part of the story. This is the story of the pain these fans have been through for 16 years.

“Everybody’s got an opinion on Leeds United, they’re loved and hated equally across the country but everyone has an interest. It would have been a missed opportunity not to tell it.” 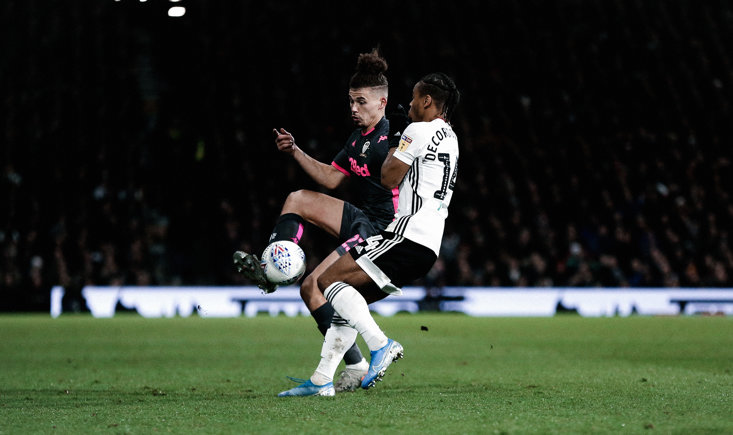 It was an opportunity nearly taken away when the Covid-19 pandemic threw major doubts over Leeds’ season and potential promotion, let alone the documentary.

“There was a six to eight-week period where we didn’t know what was going to happen,” admits Rowe. “That was the biggest challenge as there was a real concern about the club going forward because nobody knew when football would be played again.”

Thankfully football resumed and Leeds made history, with Take Us Home a brilliant reminder of one of the greatest campaigns in the club’s rich narrative.

“It’s a great legacy piece for the fans,” Mertens says proudly, while Rowe adds, “We’d like to think we’ve made a difference in how Leeds is perceived as a club from a fan’s point of view as well. A lot of the people who I know who have watched it aren’t Leeds fans but found themselves willing Leeds on.”

And that’s the power of this documentary...Dirty Leeds is gone.