Football
Features
The little Argentine has achieved an incredible amount over the course of his Barca career
Conor Keane
13:22, 06 Aug 2021

After an incredible 672 goals in 778 appearances for his beloved Barcelona, Lionel Messi is now a free agent looking for a new club.

A scorer of 120 Champions League goals, who netted a world record 91 goals in a single calendar year across all competitions in 2011 and has netted a total of 48 hat-tricks for Barcelona.

The accolades are absolutely endless, but it’s worth reviewing the Argentine’s extraordinary achievements at Camp Nou season-by-season.

This was the season in which a 17-year-old Messi introduced himself to the world, becoming the youngest player to play for the club in an official competition when he played against Espanyol, alongside giants of that era in Ronaldinho, Samuel Eto’o, Xavi and Carles Puyol. He had not even turned professional when he made his debut and his first goal for the club came against Albacete, assisted by the brilliant Ronaldinho. The club won a first league title in six years, but with Messi around they would never again know such a drought.

Messi signed his first professional deal on his 18th birthday, tying him to the club until 2010. He made 25 appearances in all competitions, scoring eight goals, one of which was his first of 120 strikes in the Champions League, against Panathinaikos at Camp Nou. He helped the club win their second consecutive La Liga title and his collected his first Champions League winner’s medal as a non-playing squad member. 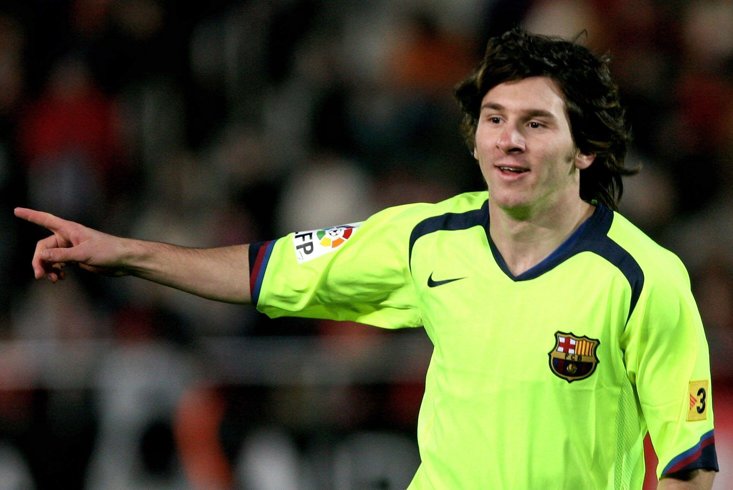 The season started with silverware as Messi helped Barca lift the Supercopa de Espana. He started to play a bigger role in the team in this campaign, making a total of 36 appearances and scoring 17 goals in all competitons. There may have been no more silverware, but it was another year of development and growth for the great player and he was starting to find his feet at Camp Nou.

This season was a silverware flop for Barcelona, but Messi really began to make his mark, featuring in 40 games throughout the season and netting 16 goals. The lack of silverware was an anomaly, as only once more would Barca end a season potless with Messi in their ranks.

After a disappointing season in 07/08, Messi came back with a hunger to instigate instant success this season. He guided his side to a tremendous treble with the Liga title, scoring 23 goals in 34 appearances as he also fired his side to Champions League glory with nine strikes in 12 matches. The third of the treble was the Copa del Rey, with Messi scoring six times in eight games.

Barca started the season with another Supercopa de Espana and Messi’s first UEFA Super Cup. They followed them up with a FIFA Club World Cup title in December to make it six titles out of six in 2009. Pep Guardiola’s side went on to retain their La Liga title with Messi scoring a staggering 34 goals in 35 appearances as he claimed his first Pichichi Trophy. The forward also scored eight goals in 11 Champions League games and picked up his first Ballon d’Or award. 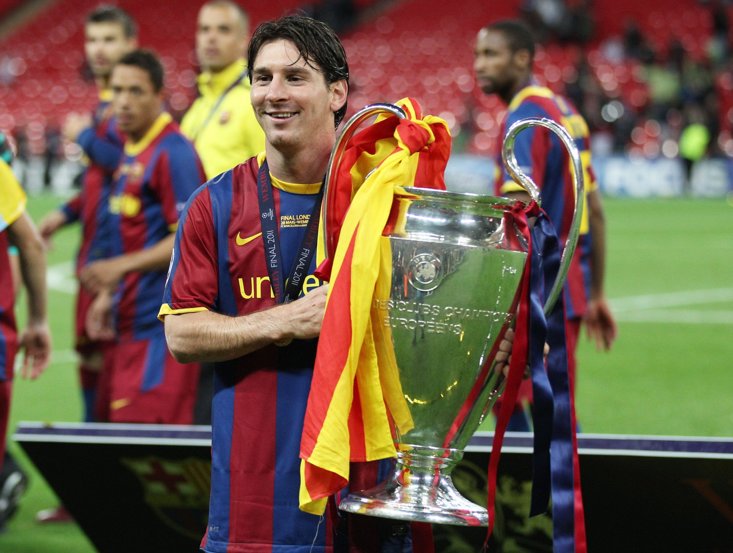 Barca retained the Supercopa de Espana title and La Liga as Messi’s goal numbers continued to amaze. This time it was 31 goals in 33 La Liga appearances and an incredible 12 goals in 13 Champions League games as Leo claimed his third European title. In the entire season, the Argentine scored 53 goals in 55 matches.

It was another great start to the season for Barca as they stormed to the Supercopa de Espana title as well as the Super Cup, and by Christmas they were Club World Cup champions again too. It may have been a season without a La Liga or a Champions League, but the club won another Copa del Rey and Messi collected his second Pichichi Trophy with a mesmerising 50 goals in 37 games. He scored 14 times in 11 Champions League encounters and his total for the season was 73 strikes in 60 matches – frightening stuff.

After that outstanding season in 11/12, Messi carried his goalscoring momentum into the following season as he got his hands on the Liga title once again and won his second consecutive Pichichi Trophy with 46 goals in 32 appearances – back-to-back seasons of insane numbers.

The campaign started with another Supercopa de Espana title, but the club failed to add anymore silverware and while Messi’s goals dropped he still recorded strong numbers as he scored 41 goals in 46 matches in all competitions.

Barcelona bounced back with another treble and Messi was on the frontline, of course, scoring 43 goals in 38 La Liga games and adding five goals in six Copa del Rey matches and 10 goals in 13 Champions League appearances.

The season started with a Super Cup triumph and a domestic double followed as the Blaugrana retained the league title and the Copa del Rey. Messi’s left foot was red hot again as he scored 41 goals in 49 appearances in all competitions. He also claimed his third Club World Cup title.

The Catalans won another Supercopa de Espana but they had to settle for just a Copa del Rey trophy beyond that. Yet Messi still had a season of personal achievement, claiming his third Pichichi Trophy with 37 La Liga goals among a season total of 54 strikes.

Barca bounced back to claim the Liga title and also retained the Copa del Rey as Messi once again proved how invaluable he was to the Catalan club, claiming another Pichichi Trophy with 34 goals.

Barca lifted another Supercopa de Espana before Messi won his 10th and final La Liga title, once again claiming the Pichichi Trophy with 36 goals in 34 games. He recorded another 12 Champions League strikes and finished the season with a tally of 51.

This was a disappointing season for the Catalan club as there was no silverware at all – yep, not even a Supercopa de Espana. Yet Messi scored 25 La Liga goals and his tally for the season was 31, bringing him his seventh Pichichi Trophy.

Last season, Messi collected his seventh Copa del Rey in what has turned out to be his final piece of silverware for the club he had been a part of for 21 years. He claimed his eighth and final Pichichi Trophy with 35 goals in La Liga. Little did we expect that this was the end.

Messi leaves behind a long-lasting legacy at Barcelona and his achievements at the club are very unlikely to be seen again, or at least not for a very long time.