Golf
Features
Rory McIlroy became only the third person to win three of golf's modern majors by the age of 25
Jack Porter
10:02, 20 Jul 2021

The 143rd Open Championship concluded at Royal Liverpool Golf Club, Hoylake on July 20, 2014. With a score of 271, the winner of the gold medal, and the champion golfer of the year was announced: Mr. Rory McIlroy.

And with that, the Northern Irishman had become only the third person in the history of golf to win three of golf's modern majors by the age of 25.

The esteemed luminaries who he joined? Only Jack Nicklaus and Tiger Woods, and like that prestigious pairing, McIlroy certainly knew how to both entertain the crowd and keep fingernails bitten.

In fact, the spotlight could have been very different. In the North West of England in that summer of 2014, Woods, who had missed the first two majors of the year, tried to utilise the tournament as his comeback, for it was at Hoylake in 2006 where he won his third Open. Eight years later, it wasn’t to be for the American. Neither was it for defending champion Phil Mickelson. 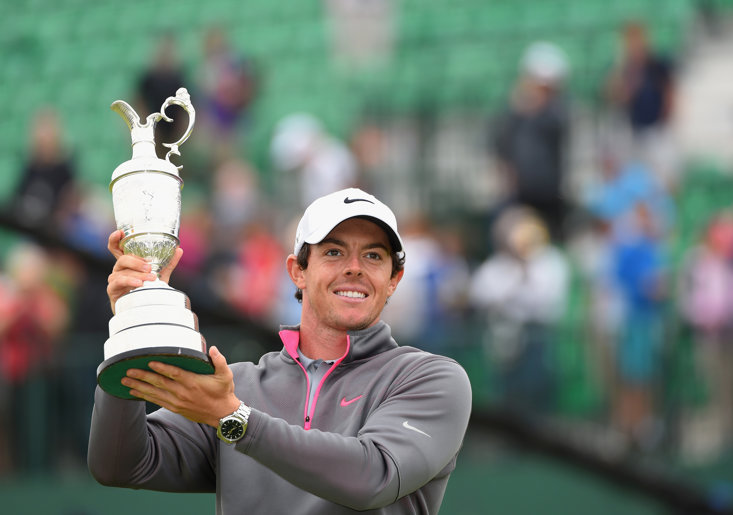 Instead the triumvirate tearing up the green to the end of the third day of play of the 2014 Open Championship would be Messrs McIlroy, Garcia, and Fowler. It was this three-way fracas that took the direction of the Claret Jug to a brilliant conclusion.

Sergio Garcia refers to it as his favourite championship, and wasted no time getting into the swing of things. Garcia was four under on the first day, produced a brilliant second hole on the second day (just as he had been chasing Tiger’s tail in ‘06) and it was the Spaniard who looked immediately like he would be going toe-to-toe with McIlroy across the tournament. As would another, the man who joined Garcia on the first two rounds, the American Rickie Fowler. On the second day, both Fowler and Garcia closed with six-under.

Meanwhile, the 25-year-old eventual winner set two simply superb successive sessions, an opening day highlight coming in the form of the second shot into the second hole, a perfect 191 6-iron creating the first birdie of the championship.

“I didn’t really have that inner-peace until mid-way through the first-round,” McIlroy would later say, “When I felt like my game was really there and I was on song and got a few under-par.

“That’s when this inner-peace started to kick in.”

On the last hole, McIlroy potted for birdie and took a two-shot lead. The first round he had shot six-under-par, but it also seemed that the Gods were with him as the weather changed, for the worse, for his competitors’ play as he left the course and dramatically reduced contention.

The Friday however started off inauspiciously, as McIlroy made a bogey on the first. Refusing to be deflated he swiftly picked himself back up, scoring birdies on five and six, the latter with incredible distance, as he produced arguably one of the finest days of his professional career.

“Rory looks unstoppable at times and this was one of those days,” said AP golf journalist Doug Ferguson retrospectively, “This guy looked like he was going for the jugular.

“Holding that putt (for the six) was almost like a gun going off for a sprint.”

Even a rogue pheasant on the eighth hole didn’t stem Rory’s stride. The bold, ballsy bird entered the play at a crucial moment, unfazed as it marauded across the green in front of most the gobsmacked golfer and the throngs of spectators. 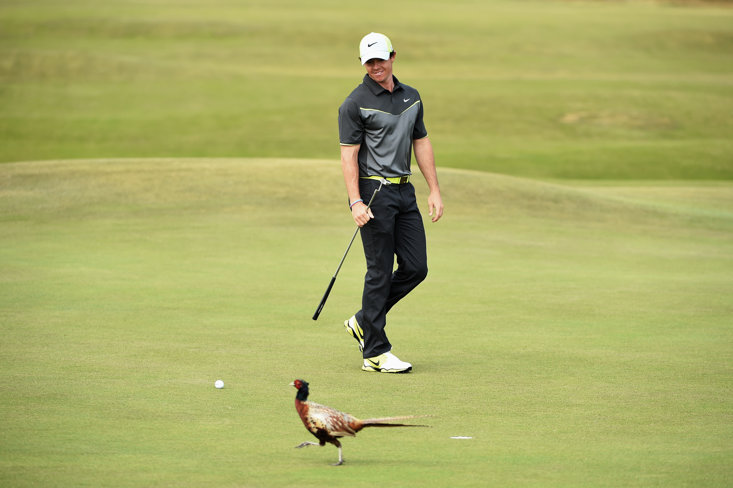 Either a good-luck charm or a testament to McIlroy’s concentration, he subsequently made the pot after the game left the game. Unwavering, by the end of the day he had matched his first round with a brilliant 66, leaving him 12-under.

The third day created history. Immediately. But not for reasons desired. A severe weather warning produced the first two-tee start in the history of the 143-year-old competition. Furthermore, McIlroy became stagnant, while Fowler and Garcia were surging, plainly enjoying each other’s company for the third-day running.

On the twelfth, McIlroy needed par to stay in front. He didn’t. The golfer’s ill-timed trough pulled Fowler level.

Storm clouds were gathering, both literally and figuratively, heading in McIlroy’s direction.

Showing his strength on the sixteenth, however, allowed McIlroy to regain his confidence and prove to the crowd, the millions watching on television, and to himself, of being worthy of sitting on the Open throne.

“It was just a perfect 4-iron,” he himself admitted, “I had a perfect shot, it was a great strike. I probably couldn’t have left myself a better putt on the green for eagle.

“You have these moments on greens where, you just know.”

Then, in front of the grandstand and aiming for the Northern Irish flag, McIlroy swung home.

“You knew that was the shot of a champion,” his caddy JP Fitzgerald said. McIlroy now leads by six shots. Just 19 minutes earlier he had been tied.

On the last day, McIlroy was paired with Fowler. Pressuring but propelling each other along and Garcia was still enjoying his favourite tournament, so much so that he cut McIlroy’s lead to two on the tenth and required the leader to birdie on the same hole to restore his three-shot advantage. Though McIlroy hit his worst shot of the week, taking his drive on thirteen way out wide, he was spared further blushes by Garcia blanking a birdie. Rory was an onlooker as Garcia couldn’t escape the bunker on 15, virtually decimating his chances for the championship. McIlroy responded with a drive on the 16th that was simply perfection.

“I knew the tournament was pretty much over when I made birdie on sixteen,” he said.

He had become the first start-to-finish winner since Woods at St. Andrews in 2005, and had ticked off the third chapter in the four-part major saga, with just the Augusta National left, having won the U.S. Open and the P.G.A Championship in 2011 and 2012, respectively.

“The thing that I’m proudest of is the way I handled my emotions,” McIlroy reflected on his historic Open success, “I’m proudest of how I gathered myself when I needed to. I’m proud of how I kept it together, even when it got a little tight.

“It was disciplined. It was hard-fought. I didn’t run away with it.

“When I look back on this win, that’s what I’ll think most about.”

With his third major under his belt and three-quarters of the way towards that Career Grand Slam that has proven elusive for all but five men, there was one person Rory McIlroy had to dedicate it to.

And no it wasn’t that pheasant.

"This is the first major my mum has been to that I've won,” he declared, “So mum, this one's for you.”