Football
Features
Kevin Ellison has no plans to retire just yet, and a return to the third tier is on the cards
Simon Lillicrap
07:57, 27 May 2021

Kevin Ellison will be 42 years, three months and one week old when he takes to the Wembley turf for Newport County in the League Two play-off final on Monday, but this will not be his final farewell.

“There’s definitely going to be a Kevin Ellison playing next year because this year there have been no fans there, it hasn't been as good,” he explains to The Sportsman. “So, I've not enjoyed it and I've looked at it and thought I'm not bowing out on that, because I'm one of those who mingles with the fans and has a bit of banter with them. So I couldn't walk away from the game without having a season with fans there.

“For me, my body and that is telling me I'm still okay at the minute, so why can't I go and play next season, wherever that may be?”

Ellison played a huge role in firing Newport to the final too. With County having thrown away their 2-0 aggregate lead following three Forest Green Rovers goals, Michael Flynn brought on the experienced man as his side searched for a goal. Just eight minutes later, he had cracked the ball in off the bar from 25 yards to bring the scores level overall. It was a reward for his manager’s faith, and he also became the oldest scorer in play-off history. Nicky Maynard would dramatically score the winner for the Exiles in the final minute of extra-time, but has Ellison’s wondergoal done enough to earn him a start at Wembley?

“We won't find out the team until the manager names it a couple of hours before the game, so I had a little laugh and a joke with him saying that if I'm not playing at Wembley I'll be banging his door down!” he laughs. “That wasn't serious, that was me just having a little bit of a laugh with the lads after the game.” 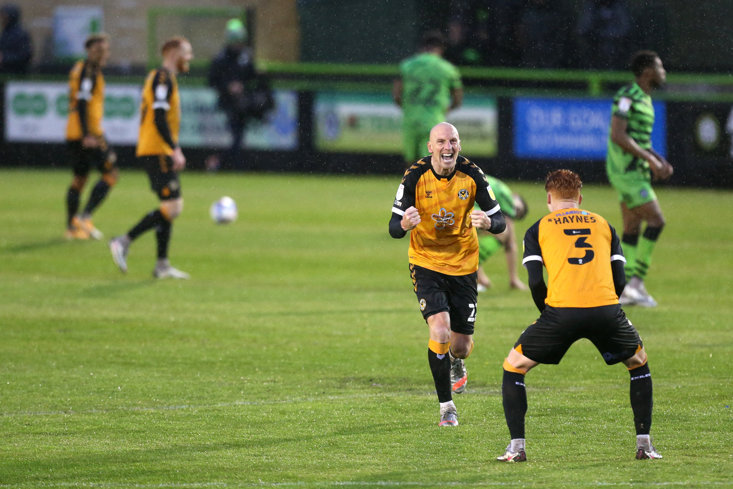 ELLISON CELEBRATES AFTER HIS SPECTACULAR EQUALISER IN THE SEMI-FINAL TIE

Ellison’s personality is infectious and it is no wonder his love affair with the game has lasted well over two decades. “I've walked in and got the trophy and the lads are like ‘How have you got man of the match?'” he says of the dressing room banter after the thrilling second leg against Forest Green. “I said 'That's how bad you were in the first half, I got man of the match and I only played 30 minutes plus extra time!’

“I was having a laugh and a joke but it is football. It isn't just about the 11 anymore, it is about the squad and the substitutes. If you look at the subs on Sunday, three of us scored out of the four subs. So you are looking at that, it is about being ready and taking the chance and getting your moment and making sure that you are ready not just for you, but for the team.”

The League Two play-off final will see Ellison come up against Morecambe, the club that released him last summer despite his nine years of solid service, in a storyline even he couldn't have dreamt up. Despite the way it ended, the veteran still looks back fondly on his time with The Shrimps, who have been the surprise package of the division this term.

“If you'd have asked me this season ‘If you get to the play-off final, who would you like to play?’ I'd have probably picked them because it is my old club and I've got friends there who I still speak to regularly, and I never got to say thanks to the supporters for how it ended.

“I had some of my best times there. I think I've paid them back for them signing me. I've done some of my better years there, played a major part in keeping them in the Football League and you only have to look at my goalscoring record there from left midfield.  If you look at my stats and what I gave to the football club, I think I've got respect from them and hope they would have a bit of respect for me.” 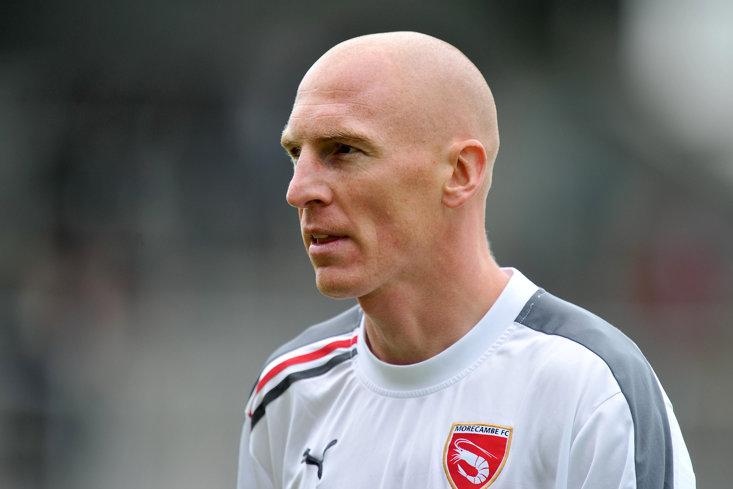 As well as being one of the iconic Football League figues, Ellison has also been a mental health role model for many, openly talking about his struggles with depression. “Yeah, I'm fine at the minute, it never leaves you but at the minute I'm in a good place. It is like most people, I have up and down days along the line but I've got better coping mechanisms to cope with those when they do come along.

“I'm a human being, not a robot. My emotions and feelings sometimes will overwhelm me, that is how it is. We are all the same. I've got better coping mechanisms to cope with them and I'm in a good place at the minute.”

Although the ‘R’ word is off limits for now, Ellison is hoping to complete his UEFA A licence coaching badges this week as he takes the first step on the pathway to becoming a manager. 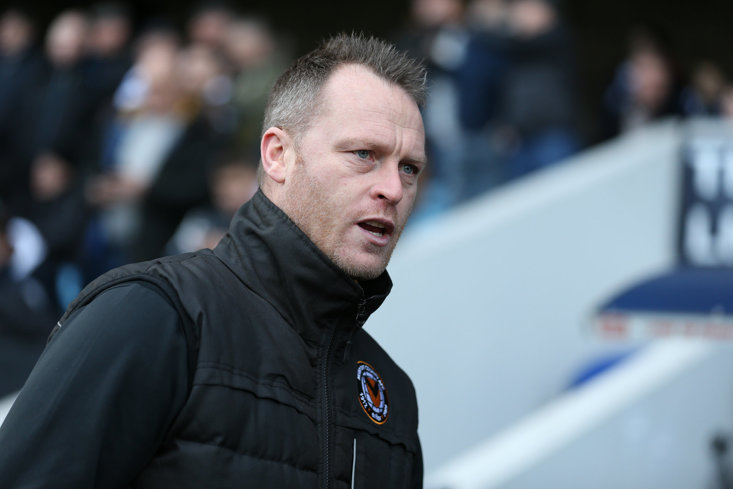 MICHAEL FYNN'S MANAGEMENT HAS LEFT AN IMPRESSION ON ELLISON

“Michael Flynn’s management is very good here, and I'm enjoying my time. People will say 'Oh well, he gave you a chance.’ Yeah he has, and I'm grateful. I'd like to think I've paid him back in the couple of appearances and couple of goals that I've scored.”

So Wembley awaits, and the fairytale finish to Ellison’s season may well materialise on Monday. As a 41-year-old, he was only offered a one-year contract last summer by Newport and they will have to make a decision on offering a deal to a man who turns 43 next February, a deal, of course, which would potentially see him play in League One.

“It would be interesting, wouldn't it? We are sort of going ahead of ourselves here, but if that did happen [playing in League One], it would be lovely, just to have a go again. But you never know, football is a funny old game, so we will have to wait and see what Monday brings and then the next couple of weeks after that and see what the plans are, and if anyone wants a 42-year-old left winger!”