That’s Tom Sanders floating high above the clouds and the crystal clear waters of Oahu Island in the Central Pacific. Just another day at the office. You won’t know the name but you will know his work, because he’s the man who introduced skydiving to the world.

One of the founding fathers of aerial filming, first flinging himself out of a plane with a camera way back in 1978, he’s also the man who filmed those iconic skydiving scenes in the cult classic movie Point Break. Yes, that’s his camera Patrick Swayze screams “adios amigos” into before tumbling backwards towards earth thousands of feet below.

And he’s been involved in Fantastic Four, Rise of the Silver Surfer, numerous Bond movies, including Goldeneye and Tomorrow Never Dies. Basically, if Hollywood needed some sky action, they knew where to turn. He’s been involved in any number of world record attempts, and he even had the life of President George H.W. Bush in his hands a few times. The former president started skydiving at the tender age of 75 and Tom was in charge of filming it for posterity.

No two days are ever the same for Tom Sanders. Just the way he likes it.

But it was back in the summer of 1988 that he was responsible for showing the world what skydiving was all about. The LA Olympics, four years before, had wowed with a man in a jetpack. New hosts Seoul were determined to outdo the Americans. Outdo they did. And Tom Sanders was smack bang in the middle of it all. 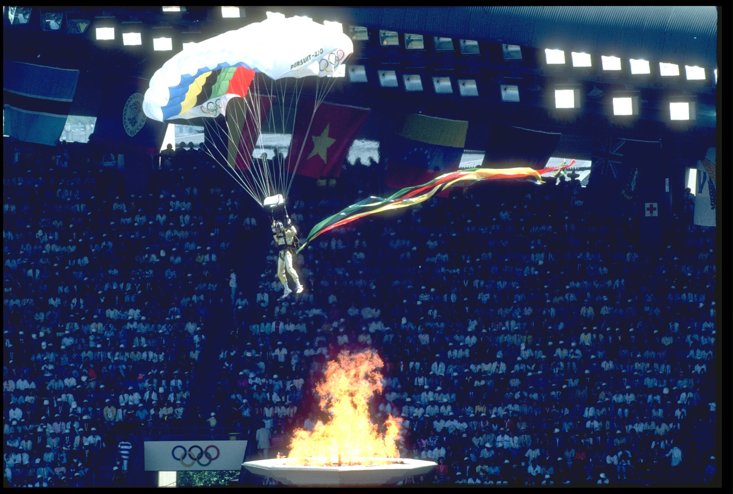 TOM PLAYED A VITAL ROLE IN THE OPENING CEREMONY IN SEOUL

The organisers put together a skydiving team that proceeded to jump out of a plane and form the world-famous Olympic rings high above the Seoul Olympic Stadium below. One billion people across the world watched in awe. Nobody had ever seen the like of it before, and Tom was the man with the camera.

“I was in charge of live transmission of skydiving for the first time to a world television audience,” he recalls from his home in Hawaii.

“The most difficult aspect was having a portable, never-before-designed live transmission set-up, that could work with the major world TV coverage all fighting for bandwidth for signals.

“Our systems worked well during practice, but with all the major TV coverage at the Olympics our system was struggling to compete. Even though we had a dedicated frequency, our signal was stepped on a bit.”

It was a total triumph and changed the perception of skydiving across the globe. “Yes, I’m very proud to have played a role in that, of course there was pressure but it all went well in the end.”

Of course when he first started jumping in 1978, he had no idea how influential his work would one day become. And beyond the Seoul Olympics it’s the cult hit movie Point Break that next fills him with most pride. It has been credited with transforming the popularity of skydiving and turning so many younger people onto the sport. 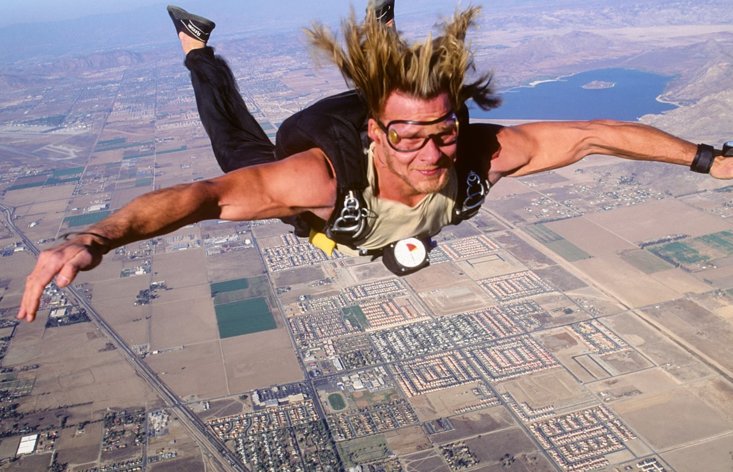 “Of course I had no idea that Point Break would become such a cult classic and have such an effect on skydiving,” insists Tom. “I knew it was a big deal since Patrick Swayze was involved but never expected the reaction it got.

“It was long before GoPros, so exposure to skydiving was pretty limited; long before the Internet, Facebook and everything else. Back then it was just the beginning of many decades of good skydiving exposure with commercials, TV shows and the occasional feature film.”

Which of course leads us on to our next question - so just what was Patrick Swayze like to work with?

“He was pure joy to be around,” is his empathic response. “He was friendly, easy to approach, just a cool mellow guy with no attitude about being a movie star.”

On top of his film work there’s also been a tonne of commercials he’s had a hand in too, perhaps most famously the iconic one from Yamaha, where a man skydives with a scooter! Seriously, check it out on YouTube, it’s incredible. 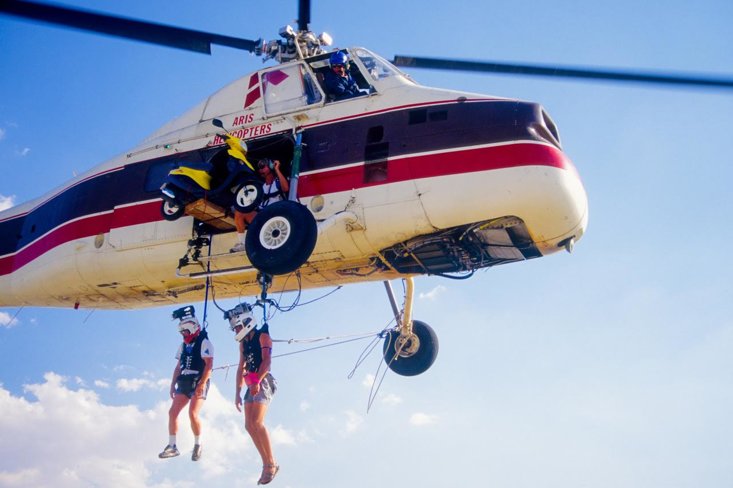 YES, THAT'S A SCOOTER ABOUT TO GO ON A SKYDIVE

“It was very challenging, potentially very dangerous but we nailed it and it went perfectly smoothly with no close calls or fails,” he says proudly.

And of course the tech has changed massively since he first strapped a camera to a helmet and jumped out of a plane towards the end of the ‘70s.

“In 1978 there was no consumer video equipment available. Skydiving cameramen would use a 35mm still camera with 36 frames of film,” says Tom. “I was one of the first to add a video camera with a separate chest mounted recorder, and one of the first to jump with a 35mm movie camera, a 35mm still camera, and a video camera cabled to a chest-mounted recorder.

“But now that equipment is much smaller I usually have between four and six cameras on my helmet. Two small GoPros for video, and two medium-sized professional still cameras.” 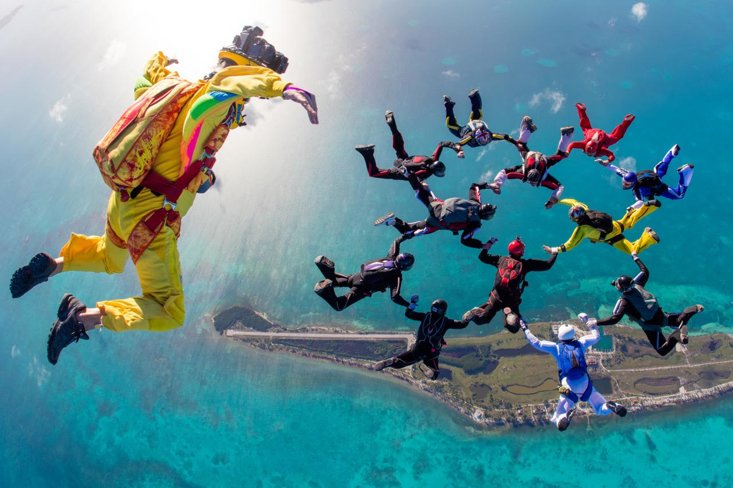 TOM IS STILL SKYDIVING AT 66

Now 66 and still actively diving, Tom can look back on a life well lived, and he’s thankful for everything skydiving has given him.

“Making my first skydive changed my entire life,” he insists. And thanks to his work so many other people’s lives have been changed too. That’s Tom Sanders, the sky God.