Some sporting images will stay with us forever. Muhammad Ali standing over Sonny Liston, Michael Jordan’s impossible jump and Roger Bannister crossing the finishing line after his miracle mile.

But no image in the history of sport had as much cultural impact as the Black Power Salute that Tommie Smith and John Carlos did at the 1968 Olympics. 53 years ago, standing on the podium, the duo produced an act of silent defiance against a regime that was persecuting black people in their homeland.

Having won gold and bronze respectively in the 200m in Mexico City, they stood on the podium barefooted to collect their medals. The lack of footwear represented the poverty that black people suffered, while Smith wore a scarf around his neck to represent black pride. Then, when the Star Spangled Banner started up in honour of the new world record holder and Olympic champion, they raised one fist apiece.

It was simple. It was majestic. But it had serious consequences.

Both athletes were actually meant to raise their right gloved hand, as the symbol of black power, but as Carlos forgot his pair, silver medalist Peter Norman came up with the idea of wearing Smith’s glove on his left hand. The white Australian is the understated hero of this story, who supported the American duo in their protest, and also had his career and life tarnished for doing so.

Smith and Carlos were ostracised, bullied and banned from the Olympics. They received death threats and were booed when they left the stadium for their protest, while Norman - who pointed to a badge that read ‘Olympic Project For Human Right’ on the podium, was left a pariah in his homeland.

He received brutal treatment, was hated by the majority of Australians and according to his nephew: “suffered to the day he died." For the forgotten man of this picture, he didn’t half have a gigantic impact on the world of sport. 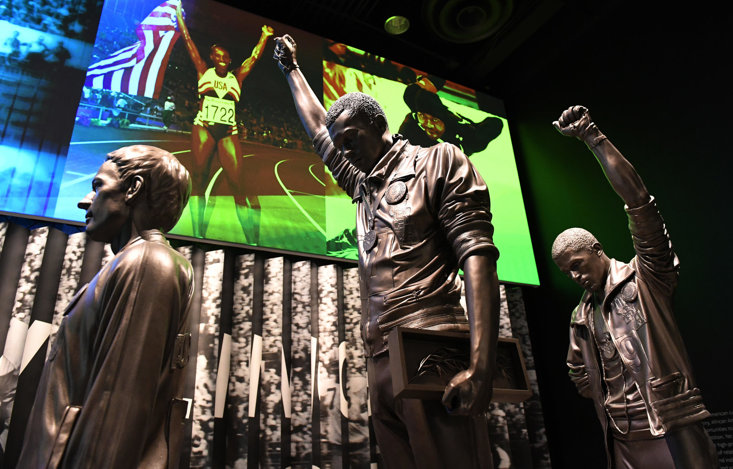 Meanwhile Chairman of the Olympics at that time Avery Brundage, despite being American, was left furious. He got Smith and Carlos expelled from the Games after threatening to ban the entire US track team, but his record when it came to ‘gestures’ at the Games was far from solid. He defended the right of the German team to perform the Nazi salute at the 1936 Games but came down like a tonne of bricks on this gesture for racial equality.

This year was significant as both Martin Luther King and Robert Kennedy were both assassinated, leading to more tension in the States but this gesture empowered the black community. It would take some time for there to be radical change, as Time magazine commented:

In 2006, Smith and Carlos would carry Norman’s coffin at his funeral as a final touching act of unity. Given the scenes we have seen in recent years, and the fact that footballers are still having to take a knee in the fight against racism, we are not there yet. But the bravery that Smith, Carlos and Norman showed and the social impact their actions had back in 1968, makes their black power image one of the most powerful of all time.