Wales are the reigning Grand Slam champions. They only lost two competitive games in 2019, a last-gasp three-point loss in the Rugby World Cup semi-final to eventual victors South Africa after a tense game, and a disappointing third-place play-off with a ravaged squad against New Zealand.

They set a Welsh record for consecutive victories and, briefly, were officially ranked the best team in the world. Their defence was superb, their game management nerveless (even if it was very nervy for fans at times), and their tenacity almost unbreakable.

Now they have lost two games in a row, away to Ireland and at home to France, having repeatedly gifted the opposition points and failed to capitalise on their own opportunities. You don’t become a bad team overnight, so the saying goes, so what has happened? Quite simply, Wales have become a completely different team.

Taking over from Warren Gatland, Wales’ most successful coach of the professional era, after a 12-year stint was never going to be an easy job for Wayne Pivac. Unlike when Sir Alex Ferguson left Manchester United and handed over an ageing squad to his successor, Gatland had just peaked, leaving a relatively deep squad of players mostly the right side of 30, most of them hugely experienced and with a track record of winning.

He also left a vastly-increased level of expectation and a desire in many parts for more free-flowing rugby. Those last two aspects of his legacy are central to understanding what’s happening with Wales right now. Pivac was chosen after a successful stint coaching Welsh regional side Scarlets, who won the Pro12 in 2017 and followed it up with a Heineken Champions Cup semi-final and consecutive domestic finals.

He did so playing the traditional Llanelli way, free-flowing rugby which took risks and, frequently, pulled them off - home or away. He was hired with a mandate to bring the same brand of rugby to Wales, where many fans had long complained they wanted to see play more like that of the 1970s, the golden age of Welsh rugby.

And, despite talking about “evolution not revolution” in his early press conferences, he seems to have decided to head straight for revolution. Gone is the blistering line speed that previously characterised the Welsh defence, the focus on playing “in the right areas”, the crystal clear sense, from start to finish, that there is a game plan and it is working. Instead, Wales seem like they might be moving to a drift defence and certainly seem to be trying a high-risk, high-offload game.

An offloading one-two is becoming a regular sight, as are line breaks. 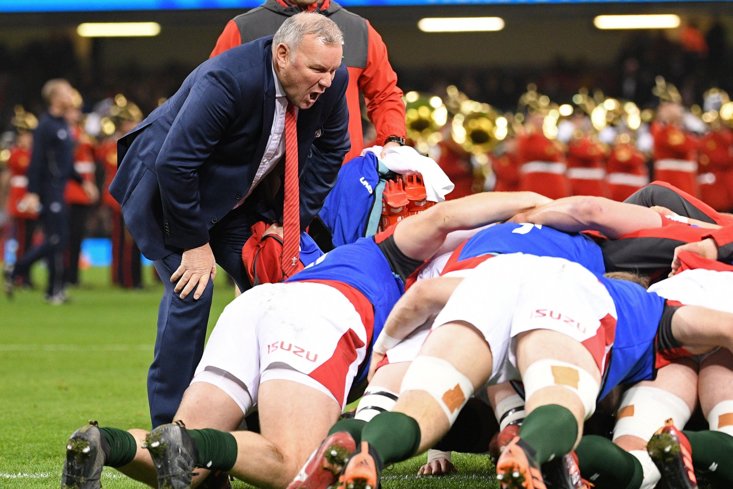 Unfortunately, it’s not yet resulting in the points Wales need to win matches, with the five tries they ran in against Italy looking a little like a false dawn — although Tomos Williams’ try against Ireland will give fans hope. In the meantime, the things that made Wales such a hard team to beat in Gatland’s last few years seem to have disappeared.

Against both Ireland and France they gave the opposition multiple chances through errors and couldn’t make their own opportunities count. Pivac highlighted that after both games, and it’s true that margins are fine at this level.  That said, good teams give themselves room to breathe so one or two mistakes aren’t costly. And they also don’t make as many mistakes as Wales have been racking up lately.

The truth is, Pivac was never going to be able to add an attacking game to Gatland’s foundations, which were rooted in reducing risk and soaking up pressure. And he was certainly never going to be able to pull it off in the middle of coaching a team through one of the most competitive tournaments in the world, especially with key players like Gareth Anscombe, Jon Davies, Tomas Francis, Josh Navidi and Liam Williams missing.

Pivac isn’t an idiot, however, and neither is he an inexperienced coach. So what is he doing? Wales have a very tough fixture list coming up: a tour to New Zealand and a game against Japan, the new power on the block, in the summer, before an autumn fixture list of Australia, Fiji, New Zealand and South Africa.

With the Rugby World Cup rankings for 2023 being drawn in November, it’s very possible that Wales will, as in 2015, be a third-seeded team for the next global tournament. There’s a lot at stake. It seems most likely that Pivac is betting that a little short-term pain is worth it for the long-term gain.

If Wales can hone their new approach against the best teams in the world over the next 10 months, they are going to be serious contenders from then on, capable of refining and enhancing their style and giving fans a thrill as they do so. Yes, the rankings are a risk but perhaps Pivac believes there will be no easy pool in 2023, almost certain to be the most competitive Rugby World Cup we’ve seen.

Wales did escape the infamous ‘Pool of Death’ last time around, after all.