One of the most recognisable names in football, and a player who pretty much did it all at the highest level. Astonishing then that the great Pelé only ever played in London once during a glittering career which stretched over almost two decades; even more surprising that this rare appearance was more about the lolly than the love of the game.

Today we think nothing of teams jetting off around the world to play in money-spinning friendlies and pre-season tours as clubs choose cash over the loyalty of their supporters or even player welfare, and more than half a century ago Santos were no exception.

The Brazilian outfit had stormed to consecutive league titles in 1955 and 1956; raising their profile, not just throughout Brazil and Latin America, but around the world and the arrival of Edson Arantes do Nascimento only went to help their cause.

During his time at the club Pelé was pivotal as the side claimed 10 state titles, six national championships and two Copa Libertadores, including the treble in 1961 making him a household name around the globe.

But for all their success, Santos had little to show for their domestic domination with one of the finest teams on the continent forced to play high-profile fixtures at neighbouring stadiums while their training ground could be described as basic at best.

Though their marketing potential was pretty limited in Brazil, the star-studded nature of their side meant that Santos had huge global appeal though, unlike today, the only real contact most people had was in the form of short newspaper articles or maybe the odd film clip.

So in order to meet the demand Santos and Pelé hit the road and between May and July of 1959, took part in over 20 money-spinning matches across Europe, playing to packed stadiums against the likes of Real Madrid and Barcelona.

So successful was this lucrative long haul venture that it wasn't long before Santos turned their attention to England and the first port of call on their 1962 tour was Sheffield Wednesday’s Hillsborough ground, with over 50,000 in attendance to see the home side beaten 4-2 by the South American superstars.

Santos reportedly demanded £12,000 per appearance and that figure guaranteed that Pelé would take to the field, a figure which many English clubs felt too high to justify, meaning that they often turned their attention to the continent, though some felt it was a price worth paying.

In 1969 Santos returned to England to play First Division Stoke City who were in the middle of a fixture pile-up, yet had no problem when it came to squeezing-in a friendly against a full-strength Santos side who won the game 3-2 courtesy of a Pelé wonder goal.

Three years on and Santos finally experienced the bitter taste of defeat at an English football ground when they were beaten by Third Division Aston Villa with over 55,000 fans crammed into Villa Park to see Pelé’s side go down 2-1.

Even power cuts brought about by the ongoing miners’ strike that winter couldn’t prevent a rematch at Hillsborough in February of 1972 with the game having to be played on a Wednesday afternoon under fading light as almost 40,000 people flocking to see the Owls beaten 2-0.

In the months that followed, and perhaps encouraged by the numbers that were turning out to see them, Santos would arrange exhibition matches in the USA and Hong Kong, while their last visit to England came in 1973 with lucrative games arranged against Fulham and Plymouth. 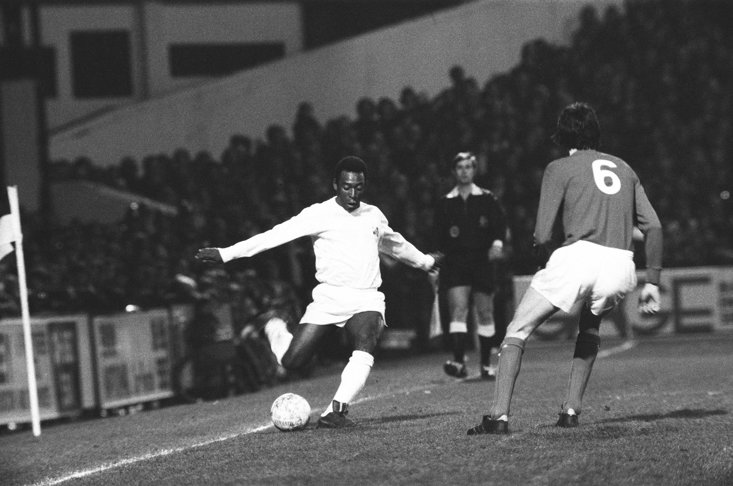 At Craven Cottage on March 12, 1973, the greatest player in the world would run out for his first and only appearance in London, opening the scoring that night from the penalty spot before the Cottagers staged a thrilling comeback thanks to goals from Alan Pinkney and Steve Earle.

Despite claiming such a huge scalp, the game was all but overshadowed by an angry dispute regarding how many people actually came through the turnstiles as, by now, Santos were not just being paid to play, but also wanted a percentage of the gate receipts too.

When Santos travelled to Plymouth a few days later, not only did they demand £2,500 up front for the appearance, but also a cut of the profits too. However, by now the club’s overseas money-making exploits, like their prize asset, were on their last legs.

Santos are thought to have generated around $20million from their extensive travels in the 1960s and ’70s and that 1973 tour alone saw them visit Sudan, Egypt, Germany, Belgium and France, as well as the much anticipated trips to England.

As a result, the great Pelé was a shadow of his former brilliant self and now resembled a washed-up pub singer, prepared to do anything for the money that the crowds would inevitably throw at him and his teammates by the bucketload.

Having played over 1,000 games for Santos, the owners had seen the opportunity to use his swan song with the club that he loved by using him as a cash cow in a ruthless marketing ploy that the three-time World Cup winner was more than aware of.

“My farewell on English soil was a sad one,” he wrote in his autobiography. “The ‘footballing machine’ was losing its shine. Never in my life have I had my time so filled with airports, hotels and different countries. It seemed they were determined to get a few more hundred out of me before I went.”