Football
Features
The club from the Moldovan first division is causing quite a stir in Europe this season
Simon Lillicrap
17:16, 19 Oct 2021

Sheriff’s win at the Santiago Bernabeu over 13-time European champions Real Madrid will go down in the history of this competition as one of its greatest shocks and the club now has a serious chance of qualifying having secured two wins out of two. Tonight, another giant of the European game awaits as they face Inter Milan at the San Siro, knowing that a win would put them in a superb position to reach the last 16.

But despite all the excitement that the newbies have generated, there lies an uncomfortable truth to this underdog story, and a whole different face to the football club that have made the neutral smile so far this term.

Essentially, this is a team playing in Europe’s premier competition from an unrecognised state. Transnistria, also known as Trans-Dniester, is a breakaway republic of Moldova that lies on the east bank of the river Dniester. Just 25 miles wide, it includes the capital of the state Tiraspol, and its football team.

Although UEFA does not recognise it and neither does the UN, in every other conceivable way it is its own state and for many, the last remaining part of the Soviet Union. It has its own currency, the Transnistrian ruble, its own government and its own flag, made up of the hammer and sickle motif of the former USSR. That same flag is seen upon government buildings while a statue of former president Vladimir Lenin watches on.

The self-recognised country even has its own military and phone signals from Moldova that do not register here, but what has this got to do with football and the Champions League? Well, Sheriff Tiraspol still play their football in the Moldovan first division, and it is hardly a level playing field. In the poorest country in Europe, teams often play in fields not stadiums, and are watched on by a handful of fans.

Not Sheriff. They have built a $200m training facility and stadium which looks so out of place in a league where money is scarce. When other clubs can only play local players, Sheriff have relied on bringing in African and South Americans, earning up to $15,000 a week in an attempt to reach the Champions League. This season they finally succeeded. 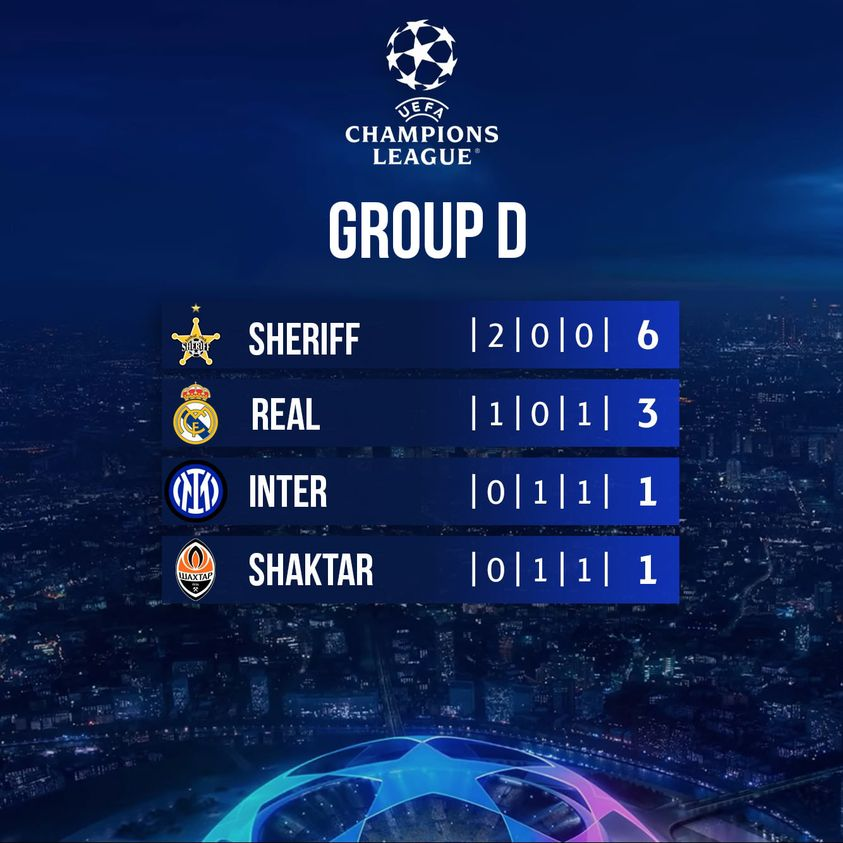 Players are paid so little at other clubs that this league has often been targeted by match fixers. A report by the Moldovan anti-corruption division concluded that at least 20 matches had been targeted by gambling syndicates in a bid to secure a result - with impoverished players taking relatively small amounts of money to play their part.

But the way Sheriff accumulate their wealth is the real sticking point. Transnistria has its own private economy, and Sheriff - founded by two KGB agents in the early 90s as the state fought to gain independence from Moldova - holds huge influence over the area.

From petrol stations to supermarkets, TV stations to banking, everything you can think of in modern day life Sheriff controls in Transnistria. Their badge is everywhere. Sheriff’s own political party, Obnovlenie - Renewal, even won a majority in the local parliament elections in 2020.

Combine that with the region’s questionable smuggling record, which has according to the New York Times, made it a haven for illicit activities such as drug-trafficking, and you have a picture of a contentious state that is entirely set up to fund a football club. If you live there, it is very difficult not to put money in the pockets of those running the richest club in the land and as a result, they have won 20 of the 22 league titles they have contested.

Moldova’s governing body however has an unusual relationship with the club. As their facilities are so much more advanced than the rest of the country’s, the national (Moldova) team now play the majority of their matches there, despite having to go through customs checkpoints to make it to Transnistria.

The Moldovan Football Federation even helped the club out in their quest for Champions League success by relaxing home grown quota laws, and it is a source of pride for some in the country that Real Madrid and Inter Milan are visiting Moldova - even if the giants are visiting a state that classes itself as independent.

The Champions League spotlight will once again shine on Sheriff Tiraspol and what that group of players achieve on the pitch should be commended from a sporting perspective. But the other side of Sheriff is a dark one.

x
Suggested Searches:
The Sportsman
Manchester United
Liverpool
Manchester City
Premier League
More
boxing
On This Day: Sugar Ray Leonard Edges Past Marvin Hagler In Titanic...
"How do you like it, how do you like it?!"   The commentator's words rang out [ ... ]
football
''I Believe In Fairies'' - The Life And Times Of The Extraordinary...
Brian Clough wasn’t just one of the most quotable managers in English football’s long history, [ ... ]
football
Rangnick Right About Fourth Being United's Ceiling, But He Shouldn't...
"We want to finish fourth in the league, this is the highest possible achievement we can get.” [ ... ]
boxing
Angelo Dundee: Three Masterpieces From Boxing’s Greatest Trainer
Perhaps the greatest cornerman of all-time, Angelo Dundee guided the careers of sixteen world champions [ ... ]
boxing
The Day Ali Talked A Suicidal Man Down Off The Ledge Of A Beverly...
Wilshire Boulevard in Los Angeles cuts right through the heart of Beverly Hills. One particularly famous [ ... ]
boxing
From Broadway To Hostage Negotiation: Ali's Best Moments Outside...
Muhammad Ali transcended the world of not just boxing, but sport as a whole, like no other athlete who [ ... ]
football
Zaha's Double, 1989 And 'Poogate': Inside The Brighton v Crystal...
This article first appeared in The Sportsman on 27th September, 2021 Crystal Palace against Brighton [ ... ]
boxing
George Foreman’s Faith: How The 45-Year-Old Heavyweight Stunned...
George Foreman swept through the heavyweight division like a hurricane, obliterating nearly all who [ ... ]
boxing
Last Round, Folks: When Boxing’s Invisible Champion Was Blitzed...
History has not been kind to Floyd Patterson. Countless world champions have drifted through the annals [ ... ]
boxing
The Life And Times Of Heavyweight Legend Jack Johnson
What do Alan Turing, The Doors frontman Jim Morrison and the comedian Lenny Bruce have in common? These [ ... ]
boxing
Pacquiao: From Poverty-Stricken School Drop-Out To Eight-Weight...
"I knew without a doubt I would become a fighter - I knew that the underdog can, and often does, [ ... ]
sports
Hulk Hogan, Mr. T And Madison Square Garden's Five Greatest...
It’s named after the fourth President of the USA. It’s where George Harrison had his concert [ ... ]
snooker
VR Mishaps, Pig Farms And American Hustles: When Ronnie O’Sullivan...
As it's snooker legend Ronnie O'Sullivan's 46th birthday, we thought we'd take [ ... ]
sports
Meet The Man Who Climbed Everest, Partied For A Week, Then Climbed...
This article first in The Sportsman on 08/12/19 There’s nothing normal about Nirmal Purja. After [ ... ]
motorsport
Frank Williams - A Formula One Pioneer Whose Team Went To The...
For much of the 1980s and 90s, Williams Racing was the biggest name in Formula One and Frank Williams [ ... ]
football
How Cantona Made Manchester United The Dominant Force Of The...
It started with Leeds United making an enquiry about signing Denis Irwin and finished with Manchester [ ... ]
football
Almost 30 Years Since THAT Goal, Davide Gualtieri Is Still San...
8.3 seconds, 28 years ago. That’s all it took for part-time footballer, part-time computer [ ... ]
boxing
River Wilson Bent Talks Coventry City, Newborn Baby And British...
“Imagine if Coventry City made it to the Premier League and I brought the British title home for [ ... ]
football
Neil Warnock - The Record Breaking Football Lover That Just...
When the whistle blows at Kenilworth Road for Luton Town's home match against Middlesbrough on Tuesday [ ... ]
football
Leicester's City Progress Is Proof That Vichai's Vision Has...
On this day three years ago Leicester City lost their influential owner, Vichai Srivaddhanaprabha in [ ... ]
rugby-league
The Birth Of The Grand Final: Rugby League's Biggest Of Big...
“I’ve said it for years… the last game of the season should be the most important,” [ ... ]
football
Celebrating Arsenal's Invincibles With The Stats That Tell The...
There’s Sergio Agüero winning it in Fergie time. Liverpool finally ending 30 years of hurt [ ... ]
football
From Balotelli To Bullard, The Premier League's Greatest Ever...
It's been a full decade since Mario Balotelli lifted his shirt in Manchester City's 6-1 [ ... ]
motorsport
On This Day: Rookie Lewis Hamilton Loses F1 Title In Controversial...
On this day in 2007, we witnessed perhaps the greatest end to a Formula One season we have ever seen. [ ... ]
motorsport
How Lauda's 140mph Crash Marked The End Of The Age Of Innocence...
There are few worse moments to lose control than when driving at 140 miles per hour. The events on just [ ... ]
football
FA Cup Round-Up: Brilliant Buxton Make First Round As Dorking...
It was a night when Dorking Wanderers saw their dreams dashed by Hayes and Yeading, Stratford made some [ ... ]
us-sports
Celebrating Jim Brown - The NFL Movie Giant Who OJ Robbed Of...
Before OJ there was the OG. The Original Gangster. In fact he was front and centre of an action-packed [ ... ]
boxing
From Taming Tyson To Bashing Buster, Evander Holyfield’s Best...
Today marks the 59th birthday of one of the best boxers to lace up a pair of gloves in the modern [ ... ]
football
Fernando Torres - Atletico's Local Hero, Liverpool's Tainted...
‘This means more’ is Liverpool’s oft-derided motto, but when they face Atletico Madrid [ ... ]
football
On This Day In 1987: The Rangers v Celtic Shame Game
Whatever the circumstances when Rangers face their Glasgow neighbours Celtic the [ ... ]